Why The Astrological Planets Are More Influential Than You Might Think!

The planets play an essential role in astrology. Find out what they mean and how they influence your life.

As opposed to astronomy, the understanding of the planets is completely different in astrology. Before the invention of the telescope, fixed stars and wandering stars ruled the night sky. The fixed stars were so named because they maintained the same distance from one another, while wandering stars moved in relation to the fixed stars.

To the Ancient Greeks, the wandering stars were the 5 planets that are visible to the naked eye. This included Earth, too. During the Middle Ages, the “planets” came to include the Sun and the Moon, to make 7 in total.

In ancient astrology, each of the planets represented a certain god. People thought that they directly influenced humans. To modern astrologers, planets are a representation of basic unconscious urges and drives, as well as energy flow regulators.

For example, Chinese astrologers associate the planets with the basic forces of nature known as yin and yang, while the five elements are essential in Feng Shui. In Hindu astrology, the astrology planets are Navagraha (the nine realms).

The planets express themselves differently through the twelve zodiac signs and twelve houses. They relate to one another through the mathematical aspects between them.

One thing is for certain – the planets definitely drive and influence your astrology signs. 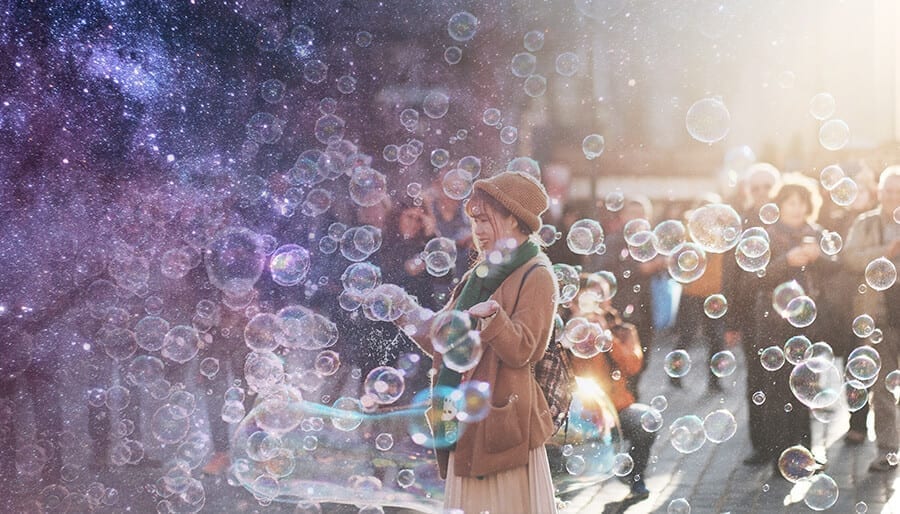 Every planet in the solar system relates to a particular zodiac sign. The zodiac sign represents the corresponding planet’s traits. Furthermore, people are born under a specific planetary alignment. This is an important piece of information you can find in your birth chart.

Your birth chart tells you how your astrology planets fit into the 12 zodiac signs and houses. The patterns of the planets can give you information on your personality, life cycles and patterns, and your soul’s intentions. In addition, your chart sheds light on the timing of your personal growth, development, and transformation.

Also known as the natal chart, it gives a holistic view of your personality, the evolutionary path of your soul, and the crucial lessons you can learn from this incarnation. It can even tell you something about your past lives.

Simply put, your chart is like a photograph of the heavens at your birth. It’s like a navigational device for your Earth-bound journey. One of the roles of astrology is to offer a profoundly unique perspective regarding how the planets interact and intersect with our lives. When the planets move, some exert their effects before others. Additionally, the planets tend to affect you differently with respect to the sign they’re in.

There are two main types of planets in astrology: inner planets and outer planets.

The outer planets are Saturn, Jupiter, Neptune, Uranus, and Pluto. These tend to move much more slowly. The outer planets focus on bigger and broader things in life, such as social movements and the evolution of the collective. They’re referred to as the generation-shaping planets.

The planets each have a particular meaning in the zodiac. Investigating these meanings is one of the most important aspects of astrology.

The Planets and Their Meanings

The planets (and other celestial objects such as the Sun and the Moon) in the solar system are each representative of a different energy and a different part of your life. In psychology, these are your drives and needs.

The personal planets are the inner planets, including the Sun, the Moon, Mercury, Venus, and Mars.

The social planets are Jupiter and Saturn. These are like a gateway between the personal and the collective planets.

Finally, the collective planets are Uranus, Neptune, and Pluto.

Together, the social planets and the collective planets make up the outer planets, which appear slow-moving to somebody on Earth, compared to the inner planets.

The Sun rules over the zodiac sign of Leo. As the most important object in the solar system, the Sun is the most important “planet” in your chart. It represents your motivation, ego, interests, likes and dislikes, and vitality. It also influences how you identify and express yourself. The Sun is masculine and connected to your father.

In psychology, it says “I am,” which further emphasizes the importance of this planet. All other planets orbit the Sun and so does the zodiac. The symbol for the sun is ☉.

The moon rules over Cancer and says “I feel” in psychology. This “planet” is in charge of your emotional attachments. The Moon signifies your instincts, intuition, habits, conscious mind, and your comfort or safe zone.

The Moon represents your emotions and it oversees how and what you share with others. This is especially so when you act or react without thinking. The Moon is feminine and relates to your mother, your family, your childhood, and your home.

It governs and watches over all of those emotions that you keep to yourself, such as fear, jealousy, and anger. On the other hand, it’s also representative of the more sensual side of you, the one associated with pleasure and joy.

Your Moon sign is visible only to those closest to you.

Mercury rules over Gemini and Virgo. In psychology, Mercury says “I think.” This pragmatic planet focuses on your communication style, problem-solving skills, the way you think, your curiosities, and general interests.

In the natal chart, Mercury is immediately before, after, or in the same as the person’s Sun sign.

If Mercury was retrograde (moving backward or east to west) during your birth, you are born introspective and intuitive. You’re likely someone who thinks things through before opening your mouth. If Mercury was stationary at the time of your birth, you’re constantly thinking and likely very communicative.

These polarities are a prime example of how the planets can be two sides of the same coin.

Governing Taurus and Libra, Venus says “I love” in psychology. It watches over your romantic life, who you attract and how, your affections, social skills, tastes in beauty, and what you’re looking for in a significant other. Additionally, your Venus sign oversees your financial situation, both the earning and the spending.

Although this is a planet of good luck, it isn’t as powerful as Jupiter. You’ll find Venus either two signs before or after the Sun, if it’s not the same as your Sun sign.

If Venus was retrograde when you were born, you’ll likely find yourself most comfortable when surrounded by familiar people. You might also find your finances limited when young, but they generally increase as you age. It’s the same with your love life.

If Venus was stationary at your birth, you’re likely to have an active social life. For you, finding true love is essential. There is also great potential for financial success with this placement.

The Mars sign rules over Aries and says “I act” in psychology. Motivation, aggression, initiative, confidence, physical strength, stamina, and inner drive are the essential aspects of Mars.

This planet is what gets you out of bed every day and keeps you going. It’s the sign that oversees your sex drive and indicates your sexual desires.

On the other hand, there’s a reason why Mars was the god of war in ancient Roman mythology. It shows how you express your anger and how you react in different situations.

If Mars was retrograde during your birth, you may prefer to avoid confrontation and internalize your energy. If the planet was stationary when you were born, you’re probably a person of action. You keep your eyes on the prize and you’re constantly on the move.

Jupiter is connected to the sign of Sagittarius. In psychology, it says “I grow,” as it affects your philosophy and ethics in life. It shows where you are cautious, where you are abundant, where you’re hungry for knowledge, and how you can benefit from that knowledge.

Planet Jupiter is a lucky charm that often expands whatever it touches. It shows how generous you are with others and where you can experience financial benefits. It’s all about truth and the eternal search for it. This planet governs religion, philosophy, law, and education.

A retrograde Jupiter at birth indicates a philosophical person, although with a tendency to get their beliefs from others.

A stationary Jupiter during birth indicates strong principles and points of view.

Saturn rules over Capricorn and says “I achieve” in psychology. As such, it deals with your ambitions and your life lessons, as well as any feelings of inadequacy. Saturn has to do with limitations, restrictions, safety, boundaries, and practicality. As a pragmatic sign, it’s all about working hard and getting what you’re entitled to.

The planet watches over your business, career, and wealth. Even when Saturn doesn’t affect your career directly according to your chart, it still tells quite a lot about you. At the very least, it can show you what you’re known for and your goals.

If Saturn was retrograde during your birth, this means you’re responsible for your own failures and achievements.

Associated with sudden change, Uranus may reveal unexpected opportunities. These may include accidents and instances of love at first sight, so be careful when interpreting this planet.

Uranus is also an intuitive planet. It governs “a-ha” moments and those situations when you happen to know something without knowing how you know it.

Neptune rules over Pisces and says “I dream” in psychology terms. This planet oversees what you’re inspired by and the aspects of life that may deceive you. Neptune is about imagination, creativity, confusion, and illusion. As such, it isn’t easy to tie down. It may be something of a blind spot that you only understand later in life.

If Neptune was retrograde at the time of your birth, you likely have a tendency to want to escape from reality.

If the planet was stationary at your birth, you may lean more artistic than realistic.

As a dwarf planet, Pluto is quite a controversial subject in both astronomy and astrology. Some discount it as a planet, while others beg to differ. Either way, it deserves a mention.

Pluto rules over Scorpio and says “I empower” in psychology. It shows where you are powerless and where you want to take charge. Pluto deals with big life events and making way for the new in place of the old.

A retrograde Pluto during birth indicates a change in your inner beliefs over time.

A direct Pluto during birth means that you have a lot of power by your side. It’s up to you whether you’ll use it for good or for bad.

The various astrology planets play vital roles in the zodiac. You can look at them from a variety of perspectives, as they influence your entire life. In fact, in some cases, they can tell you about your earlier and future lives.

Each of these planets only provides the relevant guidance if you consult your charts in detail. There are too many aspects to cover in full here. The rest of the story is better left for another day.

In the meantime, what have you found out about your life from the planets? Which do you resonate with the most? Do your friends and family agree? Feel free to join the discussion below.