The Four of Wands cards is one of the happiest, most beloved cards in the Tarot deck. Very simply, it represents joy, celebration, triumph and social harmony. Reminiscent of the may-poles which were used in fertility and Spring rituals, the four wands create an arbor for a spiritual ritual or celebratory bash.

The crowds of people gleefully run out of the walled city, which represents materialism, security, mundane obligations and society at large, toward the simple but perfect structure of the four Wands. No matter what material riches you may acquire for yourself— even if you have your very own walled kingdom— there is nothing that can substitute for the nourishment of human spirit by way of spiritual faith, consciousness expansion or creative expression. Kingdoms, even of the most splendid kind, can become prisons if one lacks hope, enthusiasm, optimism and opportunity for expansion; this is the exact situation indicated on the Tower card in the Major Arcana.

In the Four of Wands, however, the people succeed in having both: the security and abundance of the well-maintained fortress, as well as spiritually nourishing experiences of jubilation, excitement, expansion, celebration, worship, adventure or creativity. This card may represent liberation from what might have become an oppressive situation or obligation, or a lovely social event, vacation, relationship or religious ritual which breaks up the routine of ordinary life and brings about great happiness, unity and revelry.

Similarly, it may indicate that one is moving from a defensive attitude— symbolized by the walled kingdom— into an open, joyous and inclusive one, represented by the flower-adorned, open-armed participants who rush excitedly out into the free world. The radiant energy which exudes from this happy card speaks for itself, and usually its friendly message is perfectly recognizable to any one: time to have some fun!

The Four of Wands card is connected to Venus in the 5th house as a symbol of joy, games, entertainment, and the Moon / Venus as the embodiment of a sense of security and joy of communication.

The Four of Wands card can represent increased harmony or security in your life through expanding your living situation or developing stronger connections to your community. You may have a celebration or wedding coming up soon, particularly if the Four of Wands card appears along with the Three of Cups card.

When the Four of Wands card is reversed, it may indicate that you have some kind of foundation in your life that is not yet solid and stable. You may feel unprepared in your life, and make hasty decisions as a result. A wedding or ceremony may be cancelled or postponed during this time. 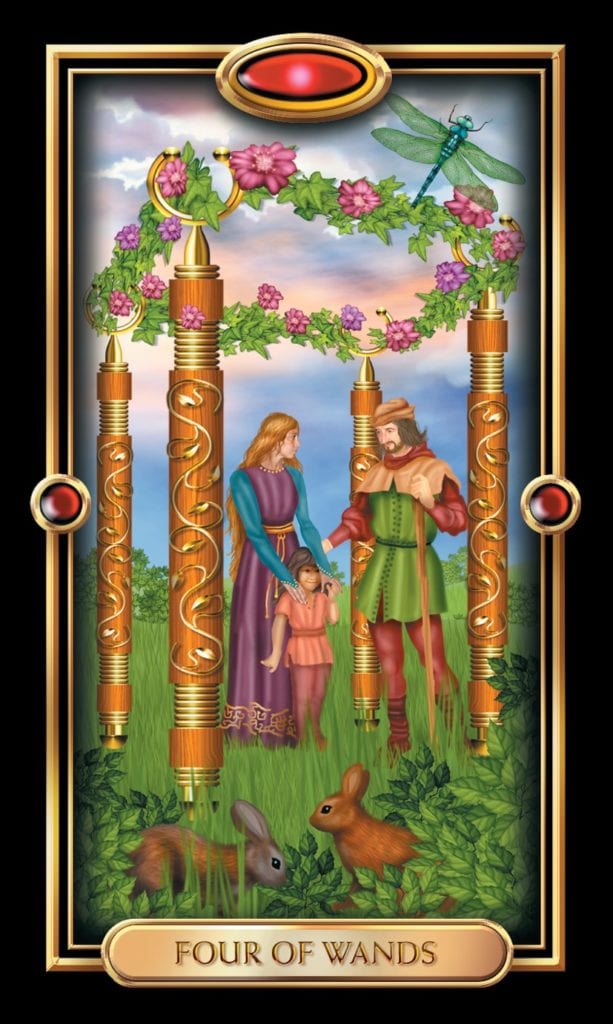 The Four of Wands card can indicate that things may be going well for you in the workplace. Despite your deserved success and kudos, you may need to beware of taking your success for granted by continuing to work hard.

The Four of Wands card can indicate that your romantic relationship will soon reach a new level of commitment, which may include marriage. If you are looking for love, special events may be a great place to meet someone special now, so be sure to attend any special event you get invited to during this time.

The Four of Wands card can mean that your finances are in good shape, and in fact, may soon get even better. Your financial success will likely be linked to your hard work and faith in yourself, and not through sheer luck or lottery.

The Four of Wands card can mean that you have family or close friends who do not agree with your spirituality, but this should not bother you. You may see things the way you do for a reason yet to be revealed and it is up to you to make up your mind and choose your unique spiritual path in life.

Previous Card: The Three of Wands
View All Cards
Next card: The Five of Wands