10 Eye-Opening Truths About Vedic Astrology That Will Offer You A Glimpse Into Your Future!

Vedic astrology is much more than looking at the stars. It’s about learning more about yourself and improving yourself through self-knowledge.

The Vedas are a large collection of some of the earliest Hindu religious texts. In that context, you may have guessed that Vedic astrology is Hindu astrology, also known as Jyotisha, which roughly translates to “the science of light.”

In the Vedic interpretation of spirituality, one gains ultimate knowledge through self-realization. Astrology is a branch of Vedic science that helps people get insight into their lives more clearly. The main themes here are karma and reincarnation, as well as using planetary remedial measures to maintain karmic balance.

Vedic astrologers make predictions of a more spiritual nature, based on more than the celestial objects. They also have deep spiritual knowledge in prescribing healing practices for issues in people’s lives.

Although gemstones, mantra chanting, meditation, and yoga are key aspects of Vedic astrology, there is much more to it. Let’s take a deeper look at Vedic science and astrology and unveil a few things that will likely interest you.

Welcome to the world of karma, mysticism, and balance. Welcome to Vedic astrology. 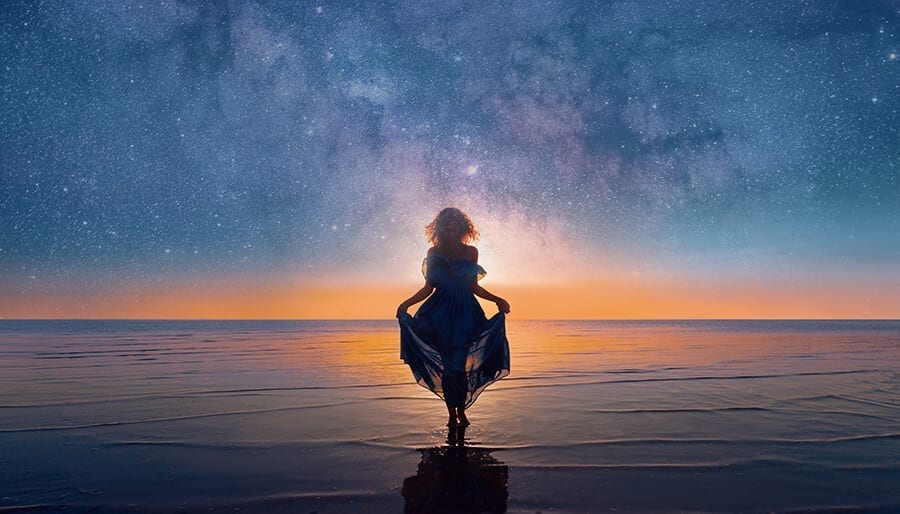 The World of Vedic Astrology

The teachings of Buddhist and many Eastern practices have been popular in the Western world for quite some time. But that doesn’t mean Western astrology and Vedic astrology are very similar.

1. It’s Not Just a Horoscope

Most people associate Western astrology with the horoscope. Who can resist reading their weekly horoscope when it’s in front of them? The Vedic side of things goes substantially deeper. Although it’s all based on the millennia-old Vedas, it’s among the most ambiguous types of astrology in the world.

Vedic astrology is about reading charts. When reading the charts, a Vedic astrologer is looking for the seeds, which branch out into something bigger in life. The seeds themselves can be good or bad, and their development depends on whether they grow into full-blown plants or are eventually uprooted.

The chart as read by your personal astrologer is a map of your destiny. This map is not your exact future – it’s much deeper than that. Vedic astrology is typically more meaningful and deeper than the typical online horoscopes.

People generally talk about astrology as a prediction tool that tells you what’s in store in your life. Vedic astrology is particularly good at giving you access to your future possibilities. Many people assume that it can predict future events, but that isn’t how it works.

Vedic astrology is actually about pointing you to a potential path. You can change this path as you walk it. Should you choose to practice the Vedic lifestyle (which is much more than astrology) you’ll become more attuned to the universe.

It’s not about changing certain predicted future events. Vedic astrology shifts the focus to pruning your spiritual practice and habits, like a plant. Through these practices, you mitigate the negative karma, thereby paving the way for a better outcome in your life. Vedic astrology shows you how to navigate the road of karma with the appropriate lifestyle choices.

Vedic astrology is at least several thousand years old. The earliest record of the Vedic lifestyle can be found in the Rig Veda, which is only one of the Vedas. According to historians, the Rig Veda is at least 5,000 years old. It may even go all the way back to between 8,500 and 10,000 BC.

Somewhere around the second or third century AD, Vedic astrology became available in Chinese. From there, it spread to other parts of the world.

And here’s the explanation:

The Earth is tilted on its axis. If you’re looking at the Sun-Earth relationship, the zodiac is moving at about 1/60th of a degree every year. This means that Western astrology doesn’t adjust for the precession of the equinoxes. The moving zodiac is off by about 23 degrees, which spans almost an entire zodiac sign.

For example, when Venus is in Sagittarius according to Western astrology, you’ll find Venus elsewhere with your naked eye. The Vedic system, despite significantly older, uses fixed zodiac signs. You might actually have a different zodiac sign in Vedic astrology compared to your sun sign in the tropical zodiac.

Using the Vedic system will help you become naturally attuned to the Universe. At least, that’s the idea.

5. Everyone Has a Chart

Just like Western astrology, your time and date of birth play an important role in Vedic astrology. Based on these, you get an astrology chart, known as the natal chart. An experienced Vedic astrologer can find out a lot about you from your Vedic astrology birth chart. He or she would read the heavens chart for your place and time of birth. This is how they arrange your dashas (your path). A dasha in Vedic astrology is a planetary period that signifies a person’s state of being.

With the help of your dashas, you have an idea of the events and other possibilities in your life path. Additionally, they also show the astrologer your past life events and your karma. These dashas predict the potential events that might occur in your life and when.

In contrast, Western astrology usually focuses more on you and your life, while Vedic astrology uses planetary ruling periods to predict trends, changes, and events.

The Vedic zodiac consists of 12 Bhavas or Houses. The Bhavas outline various areas of life, each of which corresponds to a particular aspect of your life. Like most schools of astrology, Vedic astrology considers relative planetary positions. The planets may cluster in some of the houses and leave others empty.

An empty Bhava signifies balance. The more empty Bhavas you have, the fewer karmic issues you need to focus on.

The sun signs dictate your zodiac-based personality. In contrast, the moon signs are reflective of your emotions and inner mood. Here are the 12 Bhavas and their familiar counterparts:

The Indian astrological study has three branches: Samhita, Siddhanta, and Hora. Each of these deals with different aspects of Vedic astrology.

Samhita focuses on collectivity. It covers everything that’s important for people as a whole.

Siddhanta, also known as Ganita or Tantra, is about the mathematics of astrology. There are five important treatises here: Surya, Paulisha, Romaka, Vasishtha, and Paitamaha Siddhanta.

Finally, Hora focuses on Jataka and Muhurta. Janaka deals with natal charts, while Muhurta elects planetary positions for achieving good things in life. This is why it’s also known as “electional” astrology.

In Vedic astrology, Nakshatras are clusters of stars. They are like the constellations in Western astrology. For example, the first Nakshatra is made up of three stars and looks like a horse.

The Nakshatra system is moon-based. There are 12 Rashis, which consist of 27 Nakshatras, also known as lunar mansions. The moon rests in each of the nakshatras for a day in every lunar cycle.

Here on Earth, the Moon’s gravity affects us. The Moon’s waxing and waning affects ocean tides. If you consider the fact that the human body is largely water, the Nakshatra system may start to make sense.

As mentioned earlier, the first Bhava refers to the rising sign in the East when you were born. Lagna is about this and the location of the moon during your birth.

Given the fact that there are 12 signs and 24 hours in a day, each of the signs takes roughly two hours to rise. The cycle repeats each day in a similar fashion.

9. Cause, Effect, and Cosmic Design

Although usually very spiritual, Vedic astrology and lifestyle are often based on pragmatism. The actions of a person are what makes them good or bad. And the planetary position in one’s birth chart further explains the cause and effect of the good or bad in a person. This is then explained through the concept of karma, where everyone has to do good to have good things happen to them. This is true for bad things as well.

It’s the cosmic design, however, that predetermines your karma and fortune. Your consciousness consists of a soul inside a body at a particular place and time. The core premise of Vedic astrology is that things are always linked. Our lives reflect the greater whole that we inhabit.

In Vedic astrology, the celestial bodies represent Hindu Gods. A particular deity governs each planet in our system. Certain planets have negative effects on certain people. To turn this effect into positive, one needs to gain the relevant planet’s favor by pleasing it through prayer.

The Complexities of Vedic Astrology

This article can only scratch the surface of Hindu astrology. This type of astrology is, in fact, a science of its own that transcends zodiac and astrological predictions.

Vedic astrology is life as seen through the eyes of the Universe.

The charting techniques aren’t something that you can learn quickly. Rather, they require dedicated academic study. The knowledge in itself isn’t enough, though. To be able to interpret Vedic astrology, a certain degree of intuition is necessary.

This intuition grows and gets refined through spiritual practices. This is why the Vedas cover more than astrology, which is only one part of it. Taken as a whole, the Vedas are the science of self-knowledge.

Those who practice a Vedic lifestyle believe that Vedic astrology is an infinite source of wisdom and knowledge. It’s practical and helps them understand life events.

Horoscope: These 3 Zodiac Signs Will Harness The Intuitive Energies For Incredible Transformation Th...
5 Beautiful Ways To Celebrate The Spring Equinox & Empower Yourself
How To Open The Portal To Your Personal Transformation During The Fall Equinox (23 Sept 2020)