The Spiritual Meanings of New Moons

Linear time is an illusion.

In fact, life is made up of cycles of time. Things begin, they emerge, they grow to a climax, then begin to fold in again, contracting, decaying and finally dying. And in the compost of what came before, new seeds are germinating, so the cycle begins again.

Plantlife follows this cyclic principle. So does human life – in the cycle of menstruation – yet also in ancient, mythological ways that most of us in the modern world have all but forgotten. It’s also the principal form of the creative process. And the seasonal cycle of the year.

But nowhere is this pattern more evident, than in the cycle of the Moon. 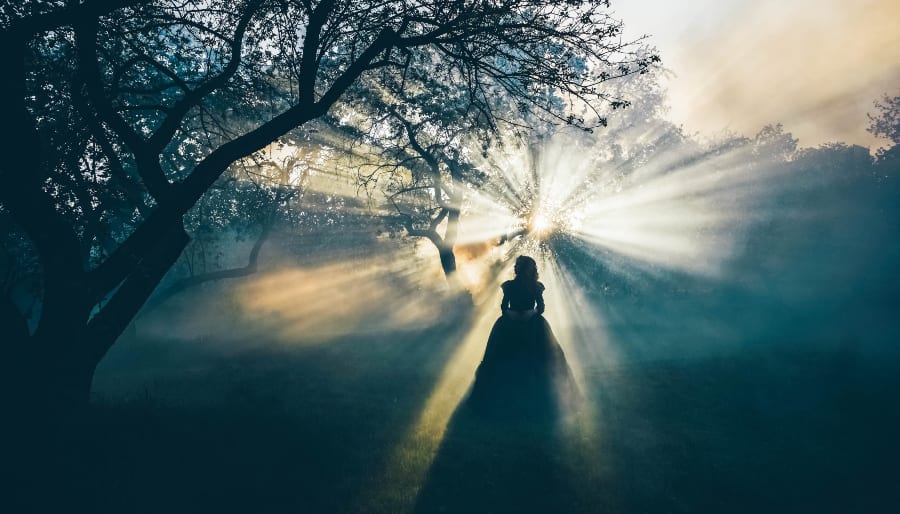 The Cycle of the Moon

Each lunar month, the Moon becomes dark in the sky for three days and nights. At the New Moon, she re-appears. and can be seen as a waxing crescent (lit from the right in the Northern Hemisphere, and lit from the left in the Southern Hemisphere).

Over the next two weeks-ish, the light reflected off her surface grows, until at the Full Moon phase, she opposes the Sun and her whole face lights up the night sky.

Then over the next two weeks, she wanes. The light she reflects lessens and lessens until She is dark once more. And the cycle begins again.

The cycle of the Moon is timeless – her changing phases are our constant companions as we move through our days, weeks, months, years and lifetimes on Earth.

Yet She does more than just keep us company!

She serves as a calendar. And a model for this cyclic growth that is so embedded into our bodies, and our lives and our creativity and production.

The Spiritual Meaning of the New Moon

Often overlooked, the New Moon is usually considered to be the beginning of the cycle. (In truth, due to the nature of cycles, there are no beginnings or endings…) She’s invisible at this point, rising with the Sun into the day-lit sky, and setting with him too. And because we can’t see her, we often ignore her, and her magic.

Yet this dark place is so vital.

In spiritual terms, the new Moon represents new beginnings: the sowing of the seed, into the dark, fertile soil.

But how often do you stay in stillness, in the dark fertile soil of the New Moon phase, without acting on the impulse to move onto the next task?

The thing to understand about the lunar ways is that they’re usually not logical or rational or easy to understand with the left hemisphere of the brain. It’s convenient to be able to understand the cycle in this neat and tidy way, but in truth, the energy of the Moon is so much more subtle, flowing and poetic.

Her cycles spiral through time.

She speaks to archetypes and Moon deities of ancient times, bringing them back to life in the modern world. She teaches us how to sow seeds of intent, yet may just as easily destroy at the New Moon phase, as any other.

The Moon and the Subconscious

In Astrology, the Moon is believed to symbolize emotion, the feeling, intuitive aspects, and with those, the subconscious. SO when dark and/or new, the Moon can edge us into the realms of the shadow.

For many folks, the darker phases of the Moon are their own shadow aspects tend to rise. The parts of self that are suppressed, disowned or rejected. This usually occurs during the waning phases of the lunar cycle, when the Moon’s light is weakening, rather than growing, but a ‘peak’ can occur at the New Moon phase, as the three days of darkness settle.

Rejection of the Dark Moon

The rejection of personal shadow (alongside the collective shadow) is something that goes hand-in-hand with our rejection of the dark Moon phases.

Tune in closely, and you’ll soon realize that these dark days which occur around the New Moon are not best suited to action, production and generating output. Yet in our patriarchal societies, these are the things that hold value. If you’re not DOING something, what worth do you have here?

Yet the Moon, and her cyclic nature teaches us that without rest, retreat, and the quiet place of stillness, creation cannot take place. At least not indefinitely. (ANd if you need proof, look around you at the continual destruction of our beautiful planet Earth).

So the Moon teaches us about pace.

About the value of the pause. About going within. And sitting in the dark, before moving on.

Yet like so many spiritual meanings of the Moon, this is not something that can be learned theoretically! You need to dive into her mysteries and discover what her powerful energy really means, for yourself. So at the next New moon, before you rush into the next new beginning, stop. Rest. And let the magic unfold.

YOU MAY ALSO LIKE: THE SPIRITUAL MEANING OF FULL MOONS