The Spiritual Meanings of Full Moons

This means that it takes 29.5 days for the Moon to progress from New to Full, and back again to New.
During her cycle, the Moon moves through four distinct quarters – you can easily recognize them when you look up into the sky at different times.

RELATED READING: WHAT ARE MOON PHASES?

Full Moon is midway through the cycle. It’s when astrologically, the Moon is 180º away from the Sun. To see this in your mind’s eye, you can imagine Sun, Earth, and Moon all in a straight line (with Earth in the middle). It’s when Sun and Moon – our twin luminaries – are face to face, the full force of their energies meeting in the middle. AKA right where we, on Earth, stand.

But understanding the Full Moon isn’t just about getting to grips with astronomical degrees and learning the shape of a third-quarter!

There is SO much spiritual wisdom inherent in the Moon phases, and they have so much to teach.

If you haven’t already read it, head here for a recap on the Spiritual Meaning of New Moons. 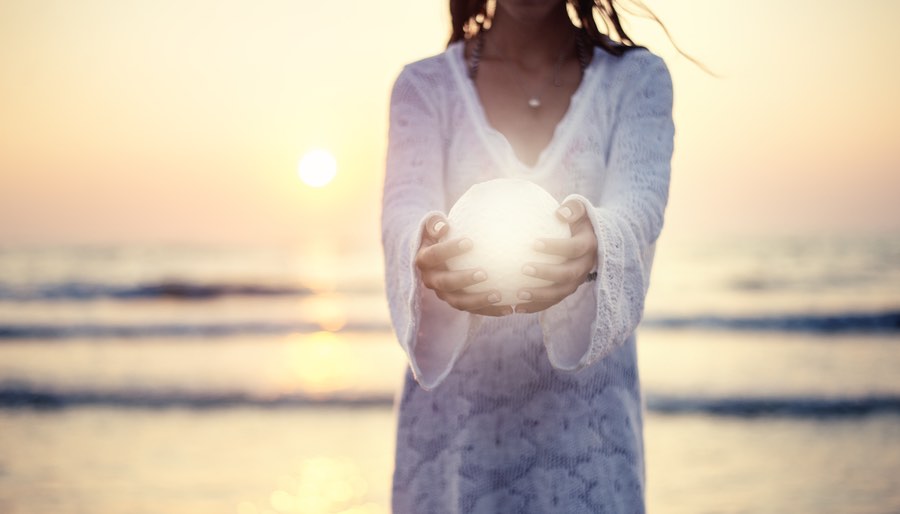 What’s the Spiritual Meaning of the Full Moon?

In the cycle of the Moon (which really is a model for all cycles of creation) the Full Moon is the peak.

Between two weeks of waxing, and two weeks of waning, She rises fully illuminated. So in this way, She serves as a kind of marker: a pivot point between rising and falling energy.

As the climactic point in the cycle, the Full Moon represents fulfillment

Spiritually, this is the point of fruition symbolizing the actualization of the ideas sown at the New Moon, that have been building during the cycle. Because it’s the peak, no more creating can be done – Full Moon brings a moment to pause, rest, and observe.

Another powerful meaning carried by this phase, is of illumination. Like a cosmic spotlight, the Full Moon shines a light (both actual and metaphorical) into places of darkness.

We normally associate the dark lunar phases with the dark, and with shadow work. When Luna herself is dark, it makes sense to mirror her ways and retreat into the dark ourselves. Yet this is different. Dark Moon phases require introspection – stepping the dark. The Full Moon phase brings the shadow into the light.

Information that’s been hidden, knowledge suppressed, or simply things that have been forgotten will often come into the light of awareness at the Full Moon.

Because of this, Full Moons are symbolic of revelation.

Climax, Illumination, and revelation all offer the opportunity for course correction.

When the momentum of growth and creativity has died down, the Full Moon symbolizes a time to step back and assess progress. It’s a natural juncture, a time for evaluation.

Because of where this phase sits in the cycle, of course, the Full Moon also marks the beginning of the drawing away of energy. From the day of two after the Full Moon peaks, She loses light and energy, waning for around two weeks.

This offers up another spiritual meaning, which is the intention of release. With her waning light, the Full Moon will symbolically take away whatever is offered up to her. Making this the ideal time for practicing rituals of release, or simply choosing to intentionally let things go from your life.

The thing to understand about the lunar ways, is that they’re usually not logical or rational or easy to understand with the left hemisphere of the brain. It’s convenient to be able to understand the lunar phases in the neat and tidy way described above, but in truth, the energy of the Moon is so much more subtle, flowing and poetic.

Her cycles spiral through time.

She speaks to archetypes and Moon deities of ancient times, bringing them back to life in the modern world. She teaches us how to sow seeds of intent at the New Moon, yet may just as magnetize and creat with the Full Moon too.