Do you know your Tarot Birth Card?

Numerology and Tarot are age-old friends, they intimately connected, and when used together, can be powerfully revealing!

Every single card in a Tarot deck is associated with a particular number. From the Magician to the Tower to the Moon Card, they all have a numerological equivalent. Most of the time, especially in the major arcana, these numbers are actually written on the cards themselves.

If you’re already familiar with Numerology, you probably understand a little about the power, meaning and symbolism contained in the numbers 1 – 9. Guess what…These same meanings hold true for the cards in a Tarot deck too! So if you already know your Life Path Number (and have a Tarot deck on hand) it’s very easy to work out which Tarot card is most closely aligned with your personal numerology…

But to find out more about how to discover YOUR Tarot Birth Card, simply follow this link…

This Post is all About the Life Path 1 and it’s corresponding Tarot Card: The Magician

If you want to read about the other Life Path Numbers and Tarot Birth Cards, click on one of the links below:

Life Path 8 – Strength (or in some decks, this is Justice)

Again, if you’re not sure what your tarot birth card is, read this first! 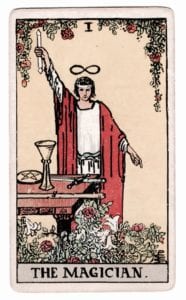 As the name suggests, The Magician is, well, magical. Also archaically known as the Magus, the Magician has two feet on the ground, he is firmly earthed firmly in reality, yet reaches up to the sky, drawing down the great energy of the Universe.

The lemniscate – symbol of eternity – always appears somewhere with the Magician, indicating an unending connection to the Source and Spirit of the Universe. It also represents his role as a bridge: between the world of Spirit, ideas, possibilities and potential and the grounded world of matter and what is. Associated with the planet Mercury, the Magician is able to carry out his work with skill, logic, speed and acumen.

Before the Magician is a table, laid out with the emblems of the four tarot suits. The cup symbolizes emotional intelligence and the pentacle represents physical power; the sword is for mental acumen and finally the wand brings for inner fire.

Through the expert alchemical manipulation of these four resources – representing Water, Air, Earth, and Fire respectively, the building blocks of all life – the Magician becomes a channel for divine creation. Magicians are manifesters – they know how to make things happen. And because they instinctively believe that anything is possible, they are able to start brilliant projects, take risks with great success, and know how to set their ambitious goals and then actually make them happen.

Key Strengths of the Magician Card:

⇢ You’re a real ‘yes’ person, seeing possibility and opportunity everywhere… and then making things happen.
⇢ You’re creative and adventurous.
⇢ You don’t care too much what other people think of you.
⇢ You’re great at working alone, but you know how and where to find help when needed.
⇢ People are always impressed with your go-get-em attitude.
⇢ You’re an amazing problem-solver, able to easily identify what’s needed to put things right.

Key Challenges of the Magician Card:

These are similar to the traits which are emphasised in a Tarot reading when the Magician Card shows up reversed.

⇢ Finishing what you start can be a problem when you have so many great ideas! You might find you lack focus, feeling like there are always other exciting things to do. Take the time sometimes to slow down and listen to what other people have to say – they might have something valuable to add to your project.

⇢ All that outward-moving energy can be tiring. Remember, you don’t have to be doing something all the time! It’s okay to just take a break now and again, and look inwards.

⇢ You’re likely to find that a Chariot is the only other card who can match your powerful, driven energy. They too know how to achieve their life goals. Expect some serious horn-locking though, especially when they realize you can’t just focus on one thing!

⇢ You’ll probably be frustrated by an Emperor’s insistence on sticking to the rules, or with a Lover’s indecisive nature. And a Hermit’s thoughtfulness might drive you a little barmy.

⇢ A sexy, earthy Empress might encourage you to be present in the moment. A High Priestess could counter and complement your expansive, fiery energy with an opposing intuitive, inward-looking and altogether cooler approach to life.

⇢ You’d be great at running your own business, or better still a charity or social enterprise, since you’re so good at solving problems. Working solo suits you best, but you’re also capable of leading a team in an inspiring, encouraging way. You just need to learn how to trust people delegate now and again.

⇢ You’d be a brilliant artist – you’re passionate, creative and perceptive, plus you have that extra magical connection to the Universe. Your creative work could change the world!

⇢ Look for ways to lead or inspire people. You’d be great as an inspirational speaker or writer – people always want to hear (or read!) what you have to say. Or how about sharing your skills as a consultant or life-coach – going into organizations or lives in crisis, tackling issues and getting real results.

Obviously, you can’t gain a true and complete picture of somebody through their Tarot Birth Card!

You are not simply your birth card, your Life Path Number, or anything else you can figure out by adding up the numbers in your life, you are a complex and beautiful creature formed from a myriad of different influences. These are archetypes or universal energy types which move through people in different ways.

But sometimes it can be incredibly powerful to have symbols, numbers, words, cards – anything at all – to hold onto, to help make sense of what we are doing and why!

Have you learnt something about yourself today? Drop us a comment below and share your insights, we’d love to connect!