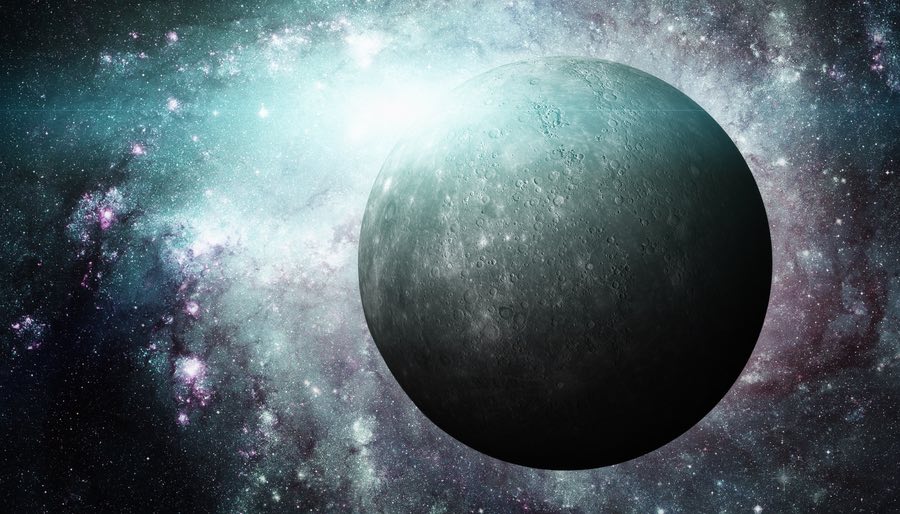 And it’s enough to strike fear into anyone who has even half an eye on the internet.

So the next few weeks are predicted to be a hot mess of delays, miscommunication, and feathers very much ruffled up the wrong way. Cue merry mayhem as we all embark on panicked reconfirming of travel plans, scouring through the small-print of that contract you only glanced through the first time and rapidly backing-up all your summer photos onto the cloud…

But what if just this kind of over-the-top cultivation of fear and panic, over the astrology of this teeny planet and its triannual retrogrades, has actually clouded our perspective just a little? The world of Spirit doesn’t do things by accident. Which means that planetary transits, aspects and yup, retrogrades could and should be as full of positive potential as they are the power to flaw plans and shatter systems of well-laid plans?

What if the retrograde period actually holds the keys to life-altering upgrades, available and ready to be snatched up, if only you could see what they were, at the time? Well, with just a few shifts in your perspective (let’s move away from all that fear-based naysaying for a moment, shall we?) here’s how Mercury Retrograde could be exactly what we all need…

1. Mercury Retrograde Is the Truth Teller We All Need to Hear

Mercury is the messenger, and when in retrograde, gets a bad rap for simply doing what it does best. Yet, this tricky planet digs even deeper! It scours our emotional edges, it dredges up our trauma responses, and places us back inside all those pesky patterns and behaviors that we thought we’d left behind.

But for a lot of people (and regardless of your personal zodiac sign), there are always gems of truth in what’s revealed by this trickery.

So watch out for this  often when Mercury is in retrograde (and even during the shadow periods, before and after), we’re often all SO preoccupied with damage limitation, we’re not open to the truth unfolding beneath our noses. Not just on a local, family and community level – on a national and even global scale too – Mercury’s backspin (especially through deep-diving Scorpio) could reveal some serious information that will affect the direction of life, from this point onwards…

So keep your ears to the ground because if you feel your way through the secrets and lies, you’ll learn how Mercury Retrograde and disclosure actually go hand-in-hand.

Could you survive a week without your phone, computer or the internet?

…Without certain apps you stream your life through – Instagram? Google Maps? Email? Banking?

Would you cope if your plane was delayed and you were stuck for a day or even two, with nothing but your good old self to rely on?

As the pioneering face of human civilization, we’ve become radically, intimately reliant on the ease and connectivity that technology creates for us. And yes, it’s great! Except when these things crack and weaken (as they so often do when Mercury is in retrograde) and our total over-reliance is revealed for what it is – an erosion of our sharp, human instinct and our personal sovereignty.

What if it’s an invitation to connect in an authentic, face-to-face way and actually build communities, instead of escaping them?

What if, when your credit card self-destructs, you borrow some money off your neighbor instead of the bank, and your vulnerability forms a friendship?

What if, when your travel tickets disappear and you’re left waiting 5 hours on a near-empty platform, you open your eyes to the world you’re held by, instead of simply rushing through it?

What if, instead of sending miscommunicated WhatsApp messages to your BFF, you meet and look them in the eye when you’re asking how they are?

What if, Mercury Retrograde wants to teach you that YOU are the most reliable and trustworthy technology that you’ll ever get to use?

How many niggling, unfinished, half-baked projects do you have lying around your home/office/desktop/inbox?

With the recent eclipse season throwing a spanner in the works, not to mention that Saturn Pluto conjunction causing long term contraction, you must be a magician if you finished even half of what you set out to do last year. But whilst this first Mercury retrograde cycle of 2020 doesn’t offer up a progressive energy, it does lay out three long weeks of energy primed for re-visiting what didn’t get done the first time around. So for anything slow-moving, stuck or just plain neglected, this is your opportunity to weave back into it, take extra care to tend to the details, and enjoy a bit of closure before Mercury stations direct on and the foot hits that accelerator once again.

The frustrations of these cosmic backspins usually come through the resistance of what is. Through being so set on a certain goal, a certain timeframe and a certain route to get where you want to go, that it’s impossible to embrace anything else.

Enter Mercury, our solar system’s tricky fox who loves nothing more than to create a few diversions, illusions and curveballs, right in the most tender parts of your well-laid plans! But instead of opposing Mercury’s medicine, have you ever thought about sipping it straight from the spoon? That diversion, illusion or curveball that turns you upside down could actually be giving you a whole new perspective on your life, one it would be impossible to see without the interruption.

So instead of resisting, try accepting what comes from this retrograde phase, flowing with it and seeing with fresh eyes, the brand new places it takes you.

5. Mercury Retrograde is a Course Corrector

My absolute favorite thing about Mercury retrograde (yes, I know that makes me sound a little crazy) is that I know, whatever happens, my course is being corrected. It’s a little like eclipse season when unexpected events seem to lift you up clean off one path and drop you onto another, in the blink of an eye. Except with Mercury’s retrograde motion, it’s less blink of an eye, more a long few weeks of drawn-out frustrations, aching disbelief, or scrabbling around in pile of unsent emails or overdue bills.

But in truth, all of these (apparently) unfortunate events actually serve a vital purpose. Because when you’ve accidentally veered of the path that’s in your highest good, focussing on distractions and side-plays, rather than your core mission (which happens a LOT in life), Mercury retrograde spins you back in line. It doesn’t always feel like it (closer to the opposite, in fact) but that hold up, confusion or broken down bus is actually stalling your timeline, making you wait, and urging you onto another.

So make patience your game-plan.

Adopt “Wait and see” as your motto.

And why not make friends with Mercury retrograde this time around!?

Share YOUR thoughts on Mercury retrograde below – are you ready to reframe your perspective?

Your First Tarot Reading of 2022 Reveals Where You Should Place Your Energy This Year
(2+0+2+2) Numerology Predicts 2022 Will Be Your Best Year Yet
Yearly Numeroscope: Your Numerology Forecast For 2022