Minor Arcana - The King of Swords

The somewhat tilted posture of the sword of the King of Swords suggests bias, one-sidedness or, on the other hand, a healthy sense of the subjectivity of life and the many different kinds of truth that exists. Depending on the situation, this card may show an older person who has become too entrenched in his thought patterns, or too close-minded in his opinions, as a result of so many years of being right.

Conversely, it may indicate a very wise and intellectually advanced person whose years of anecdotal knowledge has transformed into true wisdom, which is impartial without being heartless, ordered without being fanatical, disciplined without being prejudiced and merciful without being weak. He is capable of grasping paradox, opposing points of view, and of understanding that many seemingly mutually exclusive aspects can all be true at one time. He has acquired not only mastery over his thoughts and mental processes, but depth, nuance and subtlety as well.

This card represents not only knowledge but knowledge at work, in practice and in action. The titled Sword represents the bias or unfairness that necessarily accompanies decision-making, since every action, no matter how carefully planned, always benefits some people while harming others. Ideas in action never retain the Platonic, ideal form they take in the world of the mind; it is far easier to envision or understand a perfect concept than it is to bring it about in reality. Once an idea or plan is physically manifested, it will necessarily disintegrate somewhat from the ideal on account of the intrinsic limitations of physical reality.

Justice in the abstract is not often the kind of Justice we seen enforced, just as the conceptual blueprint of a house is almost always different from the actual building that is ultimately constructed. The King shows this flexibility, no longer feared or repressed, but instead internalized and put to effective, practical use.

The King of Swords card is connected to Mercury in Gemini as a symbol of agility, wit, cunning and resourcefulness.

The King of Swords card can indicate that you are a professional at the top of your game. You may be an expert in your field due to an intense time of study. You are likely quite sophisticated and know how to apply your knowledge and practical experience with class and ease.

When the King of Swords card is reversed, it can indicate the manipulation of facts or verbal abuse for personal gain in your life. You may experience blocks in integrity or objectivity due to strong opinions or bias. You may be holding in truths that you should be telling. 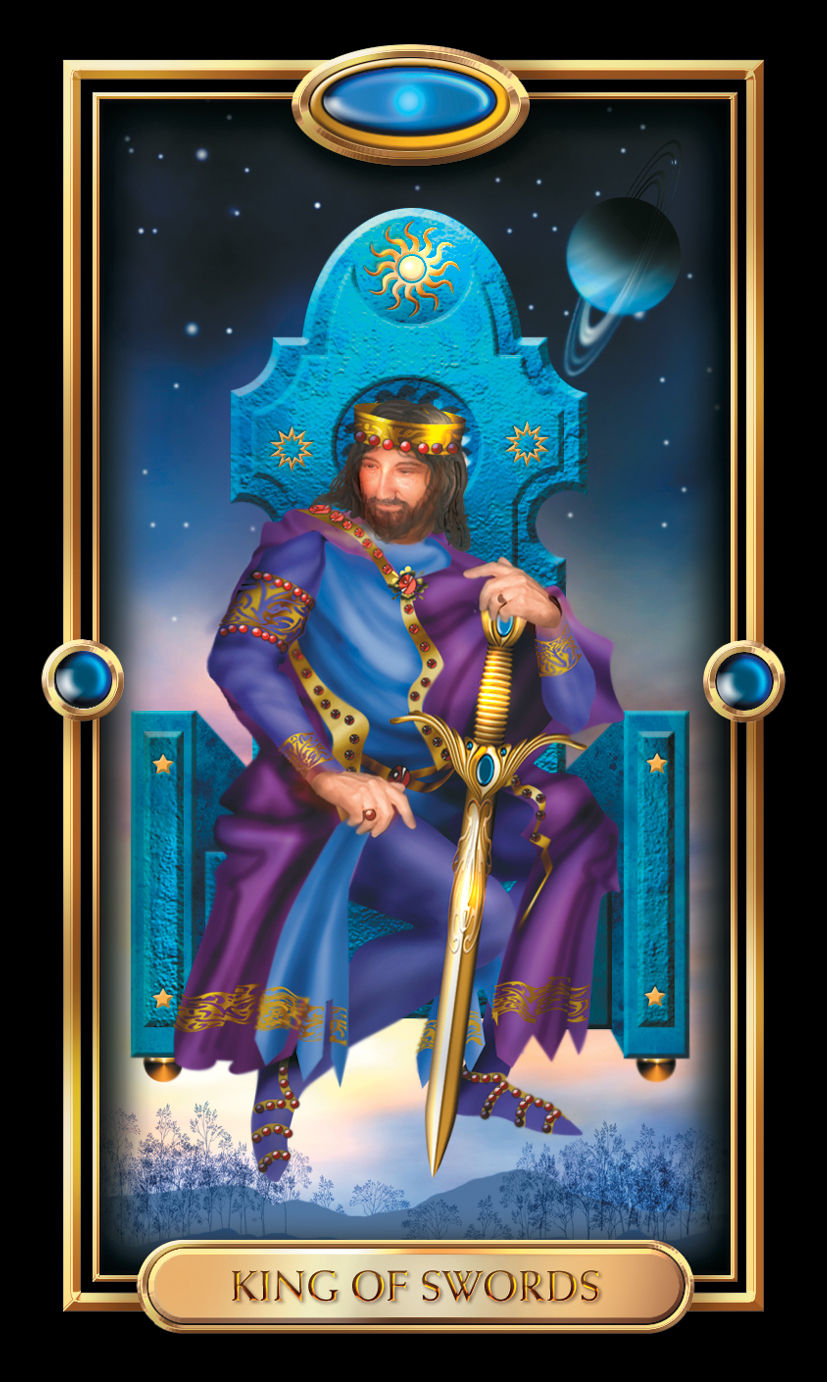 The King of Swords card can indicate that a man in your work environment may behave or speak in a way that you find bothersome, but it could be that you are being too sensitive. If you are looking for work, then a dark-haired man may be in a position to hire you if you impress him on every level needed to get the job.

The King of Swords can indicate that a strong, forceful, opinionated man may be part of your romantic life. If you are in a committed relationship with such a person (male or female), it can mean that you may need to accept them for who they are and learn to communicate through the more feminine aspects of your nature. You should not tolerate being mistreated and may need to protect yourself if you feel your boundaries threatened.

The King of Swords card can represent full understanding and reality in your financial life. You may need to face some financial matter directly and avoid hiding and waiting for them to go away. You can also benefit in your prosperity through generosity to others.

The King of Swords card can indicate that in order for you to connect with a set of spiritual beliefs, they must make sense to you mentally as well. You may deepen your spiritual awareness by seeking out new sources of information and insight. Now is a good time to try something new that will help

Previous Card: The Queen of Swords

Next card: The Ace of Wands