Minor Arcana - The King of Cups

The King of Cups represents the artistic or creative mastery, emotional subtlety or repression. Many are quick to react to the somewhat melancholy expression on this king. Water does not like to be still but prefers to flow. Water represents emotions, and the King cards signify a position of authority, mastery or responsibility, and so we find a rather unhappy figure who feels on the one hand constrained by the obligations, tight schedule, and rigid structure of his life, and on the other not quite in touch with his imagination and emotions either because of all his obligations and duties.

Emotions are spontaneous and have “a mind of their own”. We do not control them, but must in fact follow them wherever they lead. The King doesn’t have this luxury anymore, however, or at least he tells himself he does not. He has taken on too much responsibility and has to reconcile to too many different considerations to simply follow his moods and whims as they come along. On the other hand, he may be talking himself into this attitude, out of a fear of his own emotions or the more unconscious, dreamy aspects of his personality, or because he has told himself he must forego his own emotional well-being for the sake of the greater good. This may signify some one who represses emotions or ignores his own unhappiness in order to make more money, or one who puts his career ahead of his spiritual beliefs.

The King of Cups can signify  an accomplished artist, healer or intuitive of some kind, who perhaps has become overly satisfied or reliant on his past accomplishments, such that he is not really emotionally present in his work anymore, nor challenging himself to go deeper. The card may indicate rigidity or numbness of the emotional faculty. It may even indicate emotional repression or neglecting the need to spontaneously create. On the more positive side, this card may show a great listener, empathetic counselor or some one who is holding himself responsible for his emotions and the careful, considerate expression of them.

The King of Cups is connected to the Sun in Pisces, as a symbol of the subtleties of feelings, intuitive knowledge, and a readiness to help others.

The King of Cups card represents a warm, honest, generous man in your life who is kind and fair. This may mean you are mature, in control of your emotions, and are skilled in diffusing emotionally charged people or situations. You are likely very balanced between your creativity and logic, and can embrace your feminine side without loss of masculinity.

When the King of Cups card is reversed, it can indicate blocked expressions, feelings, and motivation. You may have a lingering fear of rejection that can cause you to seem selfish to others. During this time, you may also lack positive leadership and treat other cultures with intolerance. 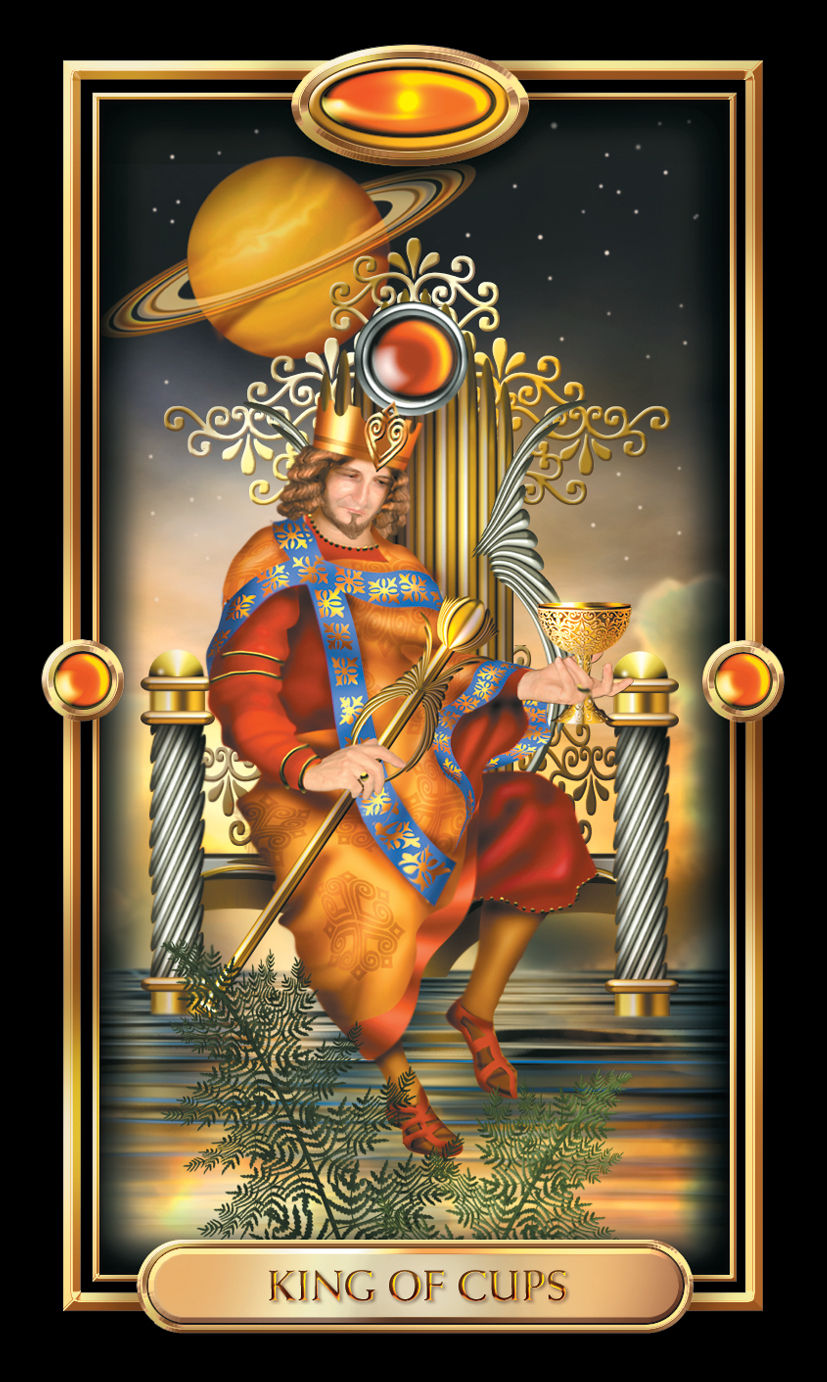 The King of Cups card can represent positive male energy or support in your work life in the form of a boss or coworker. Now is a good time to ask for help or support where you need it. Your coworkers likely have great respect and admiration for you, and things may soon improve at work.

The King of Cups card can indicate you will receive good answers to the questions you may have been asking about love. If you are looking for love, you may soon have a balanced, loving, and possibly light-haired person coming into your romantic life soon.

The King of Cups card can represent taking responsibility in your finances, even if you may be tempted to avoid reality. Giving a small portion of what you do have may also usher in increased prosperity in your financial life. Your kind, compassionate contribution doesn’t have to be large to matter and make a difference.

The King of Cups card can represent contradictions of feminine and masculine energy in your spiritual life. You may feel tuned into feminine qualities such as compassion, love and concern, but also feel connected to male qualities like action, accomplishment, and discernment at the same time. Now is a good time to meditate on the best combinations of these qualities so you can take the best course of action in your spiritual pursuits.

Previous Card: The Queen of Cups

Next card: The Ace of Swords