What Do We Really Know About Hillary Rodham Clinton? An In-Depth Analysis Of Her Astrology… 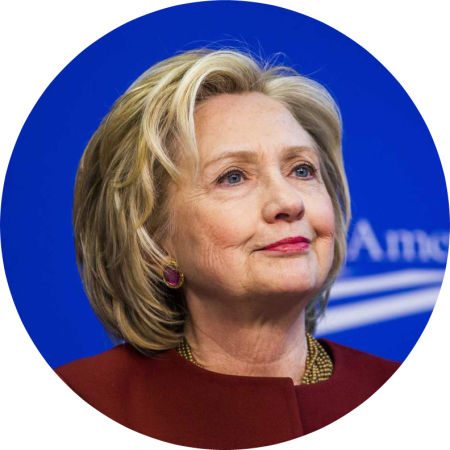 PinHillary Rodham Clinton has been a crucial part of American history since her husband, former President Clinton became governor of Arkansas in 1979. Since then, she and her husband have been in and out of the White House, and their involvement in politics has endured the test of time. Out of curiosity I decided to study Hillary Rodham Clinton’s astrology transits in conjunction with her transition from U.S. Senate representative, to Democratic Presidential candidate, to Secretary of State, and back to Democratic Presidential candidate. Although many more details could have been divulged, I kept it simple and decided to talk about Saturn’s transition through the signs and Clinton’s astrology houses since her first Presidential campaign.

Here are explanations of some astrology basics I will refer to:

The natal chart is a snapshot of planetary placements within the astrological signs at a certain date, time and place. When astrologers refer to a planet in the natal chart, we call it a natal planet. Within these signs, each planet, asteroid or comet is at a specific degree within the signs. Planets are also placed in what are called Houses, which are divisions of the ecliptic plane, and are set up differently based on the time and location provide. Each house represents a different field of experience.

Transit planets refer to the continuous motion of planets on the elliptic plane, and are used for predictive astrology. Transit planets compared to a natal chart for a person, establishment or event can show trends and events that lie ahead or in the past. The closer a planet is to the Sun, the faster it moves. Therefore, planets like Saturn that are farther from the Sun, orbit at a slower rate. Because of this, transit Saturn’s influences can be observed for years at a time. When Saturn transits a planet or an axis point, the energies of it can be stifled or hindered in some way. Because the locations of the signs stay the same, transit planets can easily be compared to a natal chart to see how they affect people individually through house placements and planetary aspects.

Saturn is the planet that Saturn rules Capricorn, which is an Earth sign. Therefore, both Saturn and Capricorn are associated with grounding energies, building from the ground up, worldly possessions, and having a sense of duty. Saturn itself is also associated with restrictions, inner discipline, authority figures, stability, structure, boundaries and limitations, responsibilities and karma. Saturn’s placement in the natal chart is the area in life that one feels a sense of responsibility, yet these energies feel out of reach at an earlier age.

A planetary return refers to a planet returning to the same sign and degree as it was in the natal chart. For example, around the same time of your birthday, the Sun returns to the sign and degree that it was when you were born. Saturn return is a planetary return in which Saturn goes back to the same sign and degree it was in when you were born. It takes around 29.5 years for Saturn to return to the exact degree as it was on your birthday, but the effects of Saturn return generally last the whole time is in the sign. This starts around the ages of 27-29 and Saturn return’s effects last from 2.5 to 3 years. 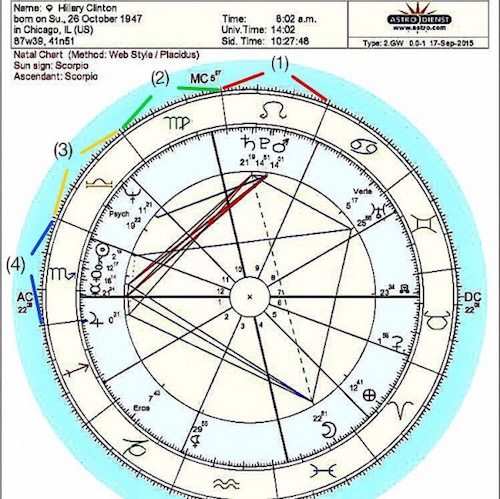 Above is a picture of Clinton’s natal chart.

At this time, Clinton went through her 2nd Saturn return. Saturn return is a time when people are asked to face their responsibilities and karma head on, so that they can move to the next stage of maturity. Of course, free will still exists, which is why some don’t learn Saturn’s lessons until later in life.

Clinton’s natal Saturn is in Leo, so this planet of responsibility and karma is prone to diplomacy, self-reliance, difficulty with creative expression, inability to settle for less than perfection, cold disposition and a fiery drive to satisfy ambitions.

These Saturnine characteristics would mostly affect the house it is located, as well as the houses that it aspects. For example, Clinton’s Saturn in 9th house is inconjunct (150° aspect) Moon in 4th house. This would cause Saturn’s sense of responsibility towards the world at large to conflict with her Moon’s need to recharge alone at home and keep emotional ties with family.

When Saturn transits your natal 9th house, it brings an inclination to higher education, long journeys, balancing spiritual and philosophical ideas, and finding truth in life. This also hints at a religious upbringing. 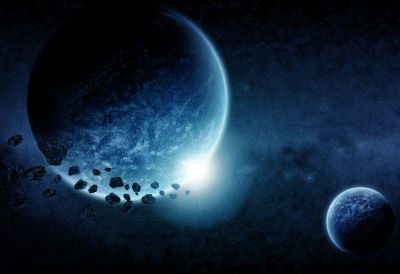 PinTransit Saturn in Virgo conjunct Midheaven and in 10th house

The Midheaven is an axis point in the ecliptic system that marks the beginning of the 10th house. It represents inclinations in career, status, public reputation, and shows how we tend to reach our aspirations in life. Clinton’s Midheaven in Virgo would characterize her to be one who reaches her goals steadily and with deliberation. Because of Virgo Midheaven’s tendency to notice and analyze everyone’s every move, Clinton finds it easy to critique others and even mimic the strategies she sees as most effective. People with Virgo midheaven feel a sense of satisfaction from a job that serves others in some way. They work very well from behind the scenes, marking their work with collective thinking and perfection.

Seeing the combination of Clinton’s Virgo Midheaven and her Leo Saturn, it is apparent that there is a clash of wanting to be in or out of the spotlight. Because a person’s Midheaven is projected outwardly, people will often be placed in a position that the Midheaven calls for. Because Saturn is projected inwardly, its energies and ambitions will summon inward attention to work towards the goals of the sign and house that Saturn is in. Saturn’s energies are inward unless the natal chart has prominent Saturn or Capricorn placements.

Now, remember that when Saturn transits a planet or an axis point, it has a funny way of hindering its energies. One prime example of this took place right after Clinton’s Saturn return – transit Saturn was conjunct her natal Midheaven in October 2007.

When transit Saturn is in Libra, it is exalted, so Saturn gives people more of a sense of responsibility towards justice, equality and fairness while keeping level-headed. Exalted planets are easier to work with because the planet’s energies flow well with its sign’s energies. During Saturn’s transit thorough Libra, it also transited Clinton’s natal 11th house. The 11th house represents friendships, networking, dreams, and goals. Libra Saturn and 11th house worked very harmoniously together for the duration of her Secretary of State tenure.

Interesting fact: the last time Saturn transited Libra in Clinton’s 11th house, she finally took Former President Clinton’s last name after years of marriage and years of resistance. This was prompted by Former President Clinton’s re-election loss for Governor of Arkansas. During his campaign, it was clear that the people of Arkansas looked down upon their different surnames. Through the suggestion of a friend, the Clintons decided to be, well, “The Clintons.”

Transit Saturn in Scorpio in 12th house and conjunct Ascendant 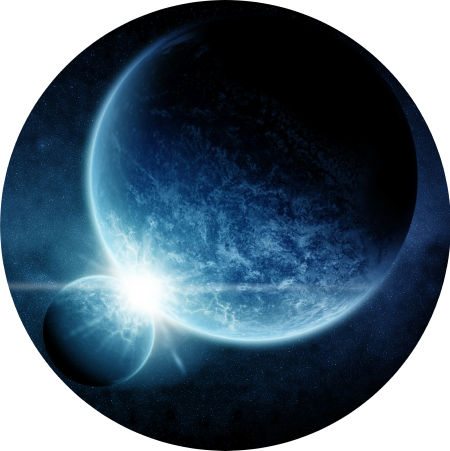 When transit Saturn is in Scorpio, we are given a subconscious need to dig deep into mysteries we would have previously overlooked, and to study the unconscious or subconscious of ourselves and others. During this transit, people as a whole strive to know others on a deeper level. This causes us to dig deeper to figure out peoples’ emotions, intentions and . This can leave many people feeling defenseless, but it also could empower you to forgive and transcend once you become comfortable with admitting to your own faults and mistakes.

The 12th house is famously known as the house of self-undoing. It is also associated with the subconscious, the unconscious, unconditional love, and the imagination. When Saturn transits your natal 12th house, you are prompted to deal with all of the 12th house factors underlying your behaviors. You are prompted to assess which of your thought patterns and behaviors serve you, and which ones bring you down.

Take note that Clinton’s Sun, Venus, Mercury and Ascendant are all in Scorpio in the 12th house. (If she only had an astrologer to warn her…)

Your Sun represents your basic identity – its placement is in the astrological sign that you identify with when someone asks you what your sign is. When transit Saturn conjuncts your natal Sun, you are presented with many options going in different directions. This tests the compatibility between you and your current involvements, and decisions you make after this transit are likely to be based on your epiphanies from this time. At this time, your authorities or others at work may question and challenge your identity.

Your Ascendant is also known as your rising sign, which represents how you present yourself to the world. When transit Saturn conjuncts your natal Ascendant, it is a time when you realize other peoples’ perception of you are not what you want to project. Saturn and Ascendant work together to aid you in taking care of unfinished business, and in abolishing your self-limitations. It marks the beginning of a new cycle for you. 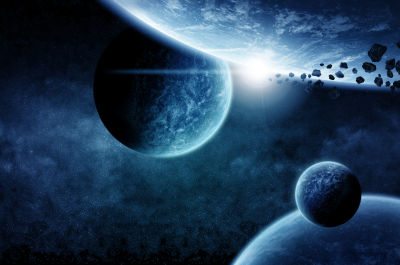 When Saturn transits Sagittarius, we are focused on finding ways to heighten and practically incorporate our own awareness, ideas and beliefs while exploring our personal freedoms. Sagittarius promotes education, knowledge, life experience and big-picture thinking. Saturn promotes taking time to plan and making progress step-by-step. Together, transit Saturn in Sagittarius influences us by taking necessary steps to reach our desired experiences, learn our desired knowledge and form our big picture.

When Saturn transits your natal 1st house, it is a continuation of the energy gained from Saturn conjunct Ascendant. With this transit, you tend to take your personal appearances seriously and your approach to life in general is more thought out. Saturn in your 1st house puts career in the forefront of your mind, and here you will build a foundation for future endeavors.

The most powerful thing about Saturn is that when it makes important transits to your natal chart, it brings you back to reality. Saturn can point out how you have overstepped your boundaries and it also opens your eyes to how you have limited yourself. Clinton’s Saturn in Sagittarius and 1st house story is to be continued until its entry into the 2nd house, which begins in Sagittarius. The FBI believes that the investigation into Clinton’s emails won’t end for another several months, all during her Presidential campaign. Although this means that the email situation won’t be put to rest for a while, it also means that Clinton can dissuade people from talking about it since that situation has no final judgment. I won’t predict too much for Clinton, but all I know is that after all the Saturn in 12th house scrutiny she has faced recently, she has a real shot at reinventing herself with Saturn in 1st house.

Your Angels Are Showing You Why This May Be Your Most Expansive Week Yet
This Numerology Message Will Help You See You're More Capable Than You Think
Tarot Reading: If You Pick This Card, You're About To Receive Prosperity & Abundance! Woop!