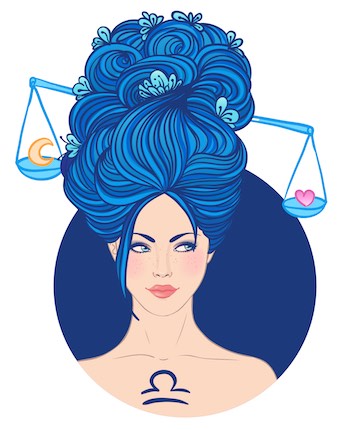 March has been book-ended by Full Moons.

The first was in grounded, purifying Virgo on the 1st and now we welcome a second Full Moon, at 10º of the cardinal air sign of Libra, at 05:36 PST/14:36 BST on the 31st of this same month: a “Blue Moon” as many call this rare twin lunation.

Libra holds the vibration of otherness

Libra needs something, someone, anyone else to balance, rely on and compare itself to. It’s the polar opposite of the sign it faces across the zodiacal belt: Aries, all full of fiery, pioneering pursuit, where the Sun now sits.

So Aries and Libra have a lot to learn from each other.

And by their very nature, Full Moons are moments in time and space which hold this polarising energy – Sun in one sign, Moon opposing, so that WE become the pivot on which these energies meet, balance and try to learn from each other what they can.

But Libra does this work by itself. It plays the role of central hinge, spindle around which everything turns – but what it also does too often, play too quietly.

Libra can be overlooked.

Libra can be gentle, conventional, obliging.

Unlike Aries, Libra doesn’t like to rock the boat or take the lead so instead, it lets others and easily slips into the supporting role.

This Full Moon is different

Full of leading, preeminent energy, the skies at this time reveal 8 planets in cardinal signs.  Libra’s own cardinality is supported by the Sun, Mercury, Uranus and Eris in Aries, and Mars, Saturn and Pluto in Capricorn.

It will make you feel energised, bold and capable.

Impetuous, and even, perhaps, a little rash.

And it’s here that Libra’s part of the pattern takes centre stage: it is to rein in the prevailing, pioneering wind of the time, and remind you of the choices you have.   This is because, with Libra’s desire for balance, justice, comparison and cooperation, it’s impossible for it – for us – to exist without choice.

The essence of cardinality is to act.  To do, to make, to go, to BE the change.  But Libra slows it down.  It forces us to look around, to ask questions, to see what others are doing, what suits, what won’t ruffle too many feathers and what won’t remove the choices of others.

The Only Choice You Ever Make

The only choice you ever make is the choice between love and fear. Everything you do is on a spectrum between these two points, moving you closer or further away from unity.

Libra is the cosmic embodiment of this principle!  Libra IS the spectrum, and its quietness is the space which allows the choice to be made.

That is what this Full Moon illuminates.

At 7º of Capricorn – squaring both Sun at 10º of Aries and Moon at 10º of Libra – Mars gives a strong, searing charge of energy to this lunation.  Any tendencies you have toward competition or hostility may rise, but tempered by the Moon’s balanced presence here, you’ll catch yourself and (hopefully) be able to choose how you truly want to act. The shadowy parts of yourself, the unkind or polarising forces within you that are spot-lit by this Full Moon will sit in Libra’s balance until you choose what to do with them.  It’s a rare and potent time of self-analysis and sweeping out the cobwebs of too much reactivity.

Giving Away Your Power is a Choice Too

If you’re on the receiving end of too much of this cardinal energy, you may find yourself in situations which highlight your own sense of powerlessness at this Full Moon.  Remember that this too is a choice – your power cannot be taken from you, however it feels. The truth is that you can only give it away.

So let your power plays be illuminated.

Let the imbalances be revealed.

Information will make you strong, and with Luna’s waning energy over the next two weeks, taking us to the Aries New Moon on April 15th, you’ll have a great opportunity to release these from your life, reclaiming your own power of choice.

Don’t be afraid to sit in the quiet over this Full Moon.

Insight and realisation rarely come from busyness and action so honour the Libran search for otherness, by first fully recognising yourself.