These 10 Terrifyingly Haunted Places in America Will Make You Want to Run for the Hills!

Ever seen a ghost?

Think you’d handle it if you were greeted by a paranormal presence, a spiritual sighting or felt the soft touch of a disembodied hand running its fingers through your hair!?

Many people actually plan ghost-hunter holidays, determined to experience the spooky and ghoulish first hand. Fancy feeling that flicker of fear run through your bones, as you walk into a dark room where something terrible may, or may not have once taken place…?

Read on to discover 10 of the most haunted places in America. Are you brave enough to enter in!? 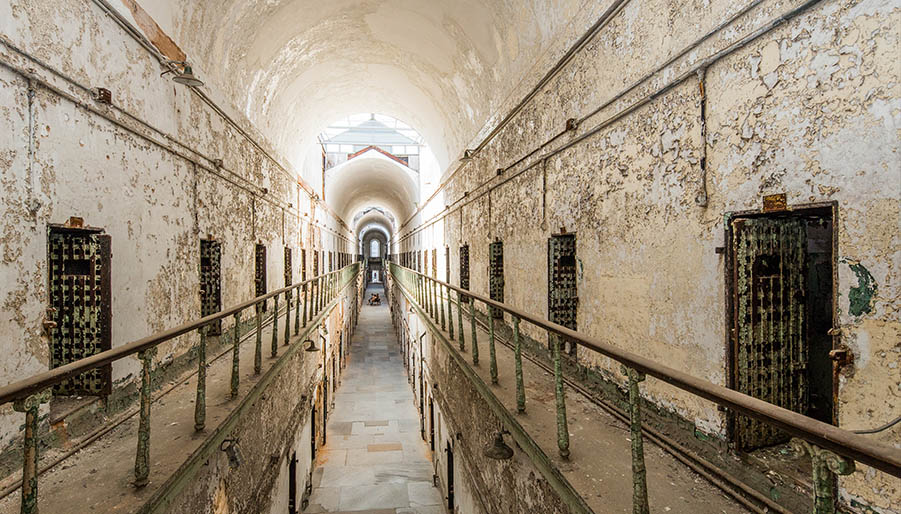 Built in 1829, the now derelict Eastern State Penitentiary was home to such notorious criminals as “Slick Willie” Sutton and “Scarface” Al Capone.

The extensive walls of this fortress-like prison confined inmates in the cruelest of solitary conditions – prisoners spent every living moment in isolation and when an inmate was required to leave his cell, a hood would be tied over his head, preventing him from seeing a thing.

As the first true “Penitentiary”, the gruesome punishments at Eastern State were designed to inspire repentance in its inmates. In fact, most inspired madness, and eventually death.

The Penitentiary closed in 1970, but by then thousands of men had been literally tortured to death. The model prison now serves as a tourist attraction, luring in hoards of fear-hungry visitors for its daily ghost tours. Many reports include sightings of ghostly figures and the spooky sounds of footsteps and incorporeal laughter. Some areas still remain closed to the public, begging the question of what horrors remain behind those still-locked doors…? 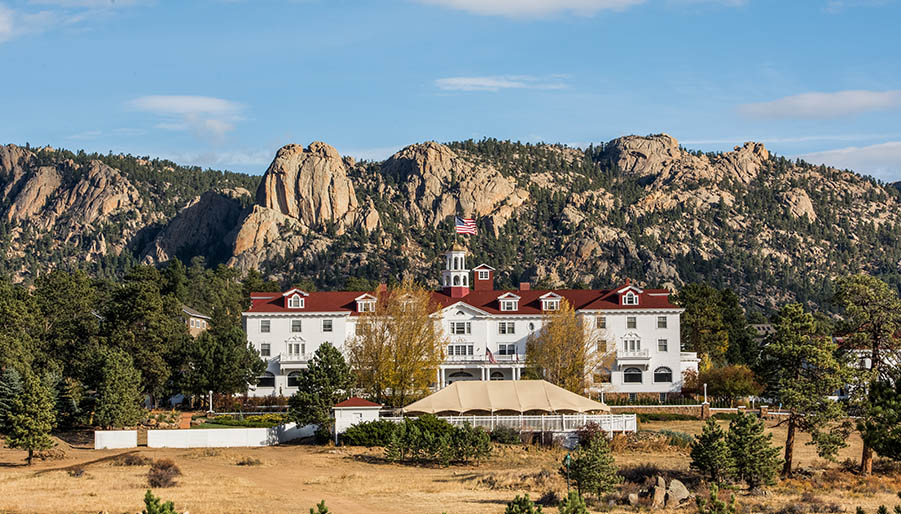 Said to be the most haunted hotel in America, a one-night stay in The Stanley Hotel was enough to inspire the famous author Stephen King’s infamous novel The Shining.

The fourth floor is reportedly where the rich kids would stay with their nannies and now it’s not uncommon for guests to hear the chattering and giggles of ghostly children, balls bouncing and even furniture moving around. Suite 217 is the room Stephen King frequented and which has seen the most paranormal activity (and often booked up with eager ghost hunters). But the concert hall is home to around 80% of the hotel’s reported paranormal activity, with regular spirit sightings, including ‘Eddy’, an ex-con who used to work the lighting, and ‘Paul’, a short-tempered entity who’s been known to hurl guests across the room when he feels like it. Orbs, strange cool breezes, flickering lights and the heady scent of roses (the favorite perfume of the late Mrs. Stanley) are all regularly sensed by guests.

It seems The lavishly haunted Stanley Hotel is not just a destination for tourists, but for the playful spirits who are trapped, and unable to move beyond this world…. 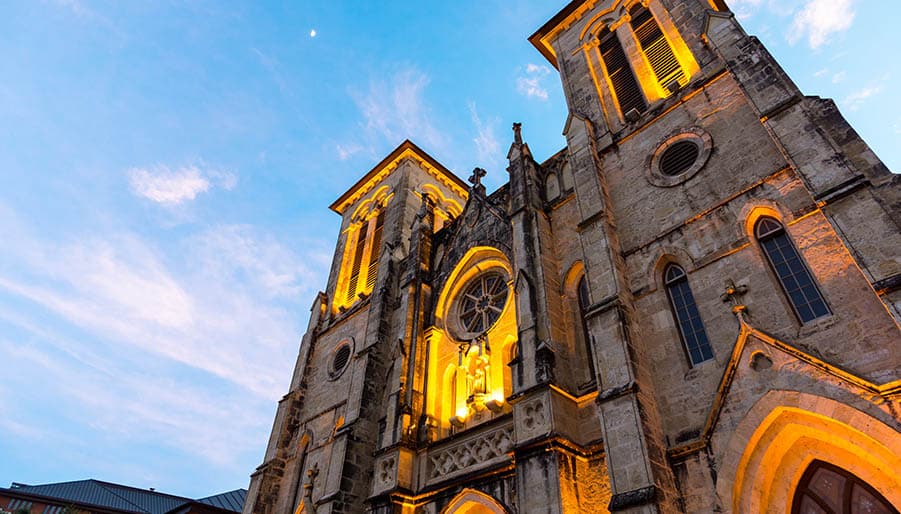 The church itself has stood fast during the checkered past of its communities, not fully understood – or unleashed – until renovations began in 1936. It was digging work around the altar which revealed a pit of charred bones, teeth, nails and military regalia. Many believed these belonged to soldiers of the Alamo, defeated in the chaos and siege of war exactly a hundred years before.

The spooky thing is, it wasn’t until these remains were uncovered that the paranormal sightings began. Since then, haunting figures have been observed in the church, as well as being captured on photographs, the most popular of which appear to be hooded monk-like figures. 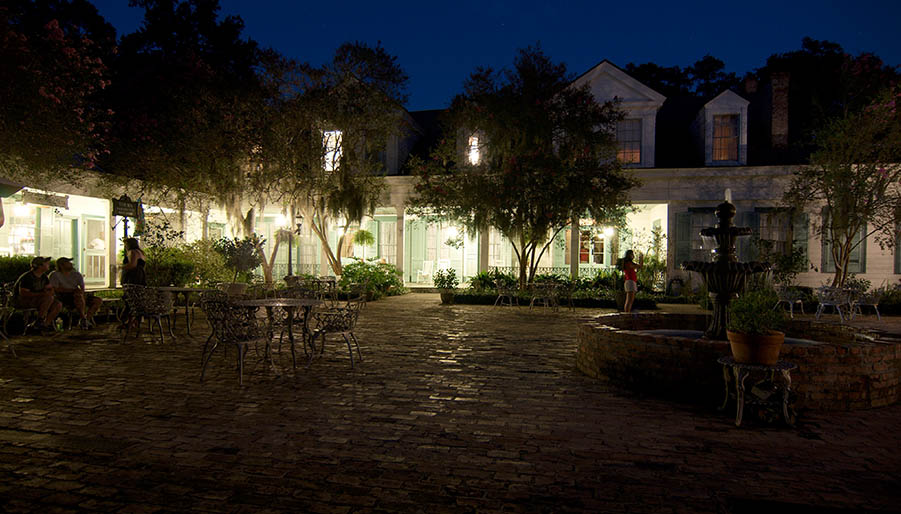 Not only is the Myrtles Plantation rumored to have been built on the site of a Native American burial ground, but it holds many more recent tales of murder and gruesome death, leading to a plethora of ghostly episodes.

The most famous by far surrounds Chloe, a former slave girl whose cruel master cut off her ear after he discovered her eavesdropping. She got her sweet revenge when she killed two of the master’s daughters by poisoning a birthday cake. But this tragic little girl ultimately found her own gruesome end when she was hung by her fellow slaves. Wearing a turban to cover her severed ear, Chloe has been observed countless times wandering the site and has even been captured in one of the most compelling paranormal photographs of all time.

Other ghost-residents at Myrtles include the spirit of an old woman, a murdered former owner and even a haunted mirror which reveals unexplainable apparitions when photographed. 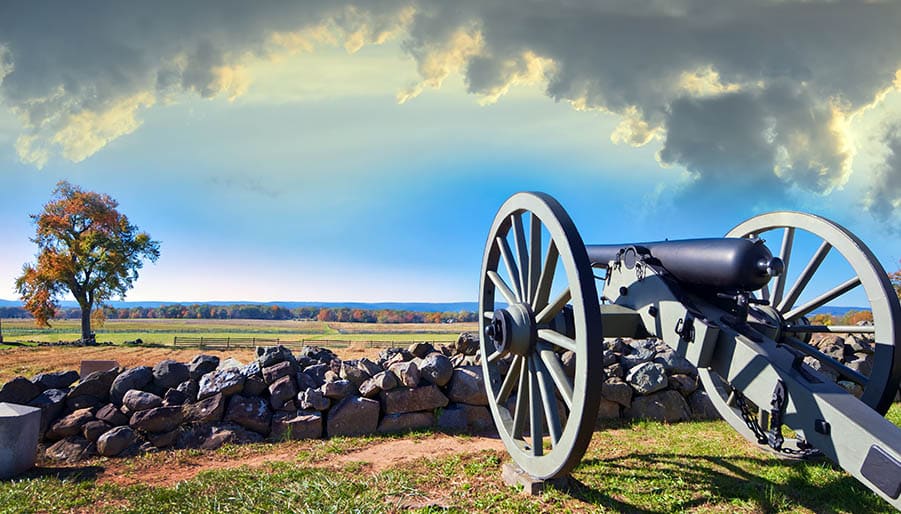 Over three days in July 1863, one of the most horrific and bloody conflicts in American history took place. The true death toll will never be known, but it’s believed that as many as 50,000 young soldiers lost their lives on the battlefield in Gettysburg during the American Civil War. For many of these young men, death came too soon and they never received the proper burials they deserved. Sightings are often reported of lost, wandering souls, ghostly apparitions searching for their lost weapons, shelter, and fallen comrades. The heavily haunted site of Devil’s Den is most popular with ghost hunters, considered by many to be one of Gettysburg’s paranormal hot spots. 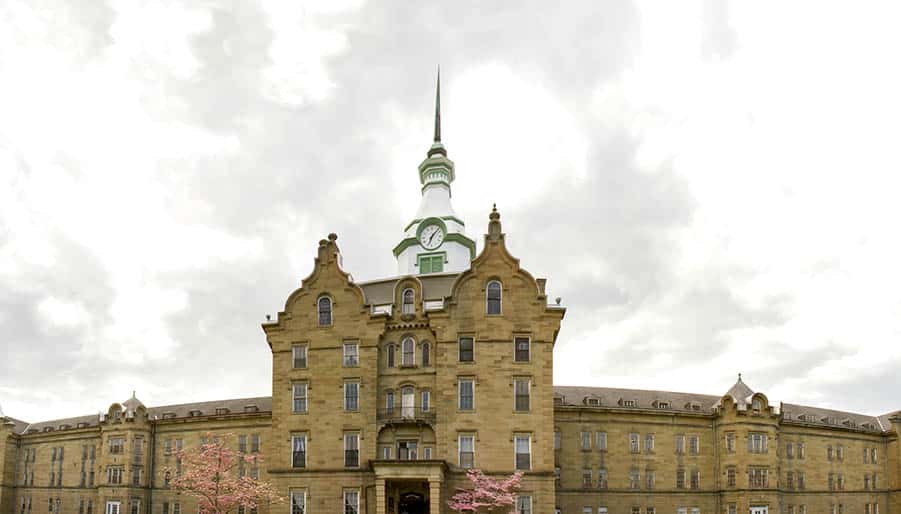 Previously known as the West Virginia Hospital for the Insane, the Trans-Allegheny Lunatic Asylum was open for 130 long years, home to many lost and ravaged souls who were cast out from society. But far from a safe refuge, these people were kept starving in cramped and inhumane conditions, locked inside cages and chained to their beds. Many patients tried to find freedom from these personal hell holes through suicide, but it’s believed now that this only served to trap them in this liminal ghost world.

Some guides and visitors have come to believe that the Asylum now serves as a kind of gateway between the realms, where Spirits who cannot find peace, still come and go in an eternal state of paranormal unrest. 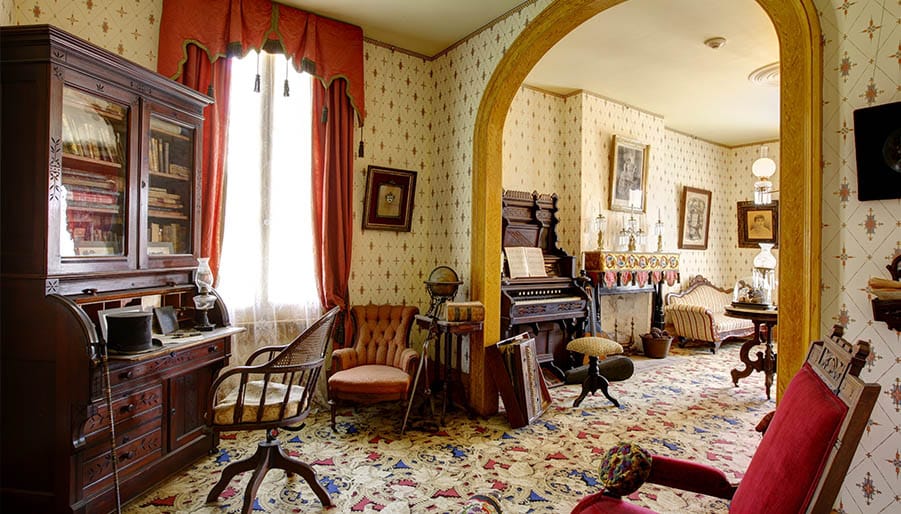 As a well-known residence that has “witnessed more history than any other building in the city”, Whaley House has been not only the Whaley family home, but San Diego’s second county courthouse, a general store, a commercial theatre and is situated on the ghost hunter’s jackpot – a graveyard.

The Whaley family saw much tragedy over the generations, first with the death of baby Thomas in a fire, and then the betrayal of Violet just weeks into her marriage, when she was deserted by her con-artist husband. The shame proved too much for her and she committed suicide in the house at 22. A total of 6 members of the Whaley family lost their lives within the haunted building and so frequent are paranormal sightings of shadowy figures that visitors often can’t tell their ghosts apart.

But what’s truly creepy is that even the Whaley family reported hearing heavy footsteps and seeing apparitions when they were resident! Could these be James “Yankee Jim” Robinson, who was hanged on the property decades before, and whose spirit still roams this site of such tragedy? 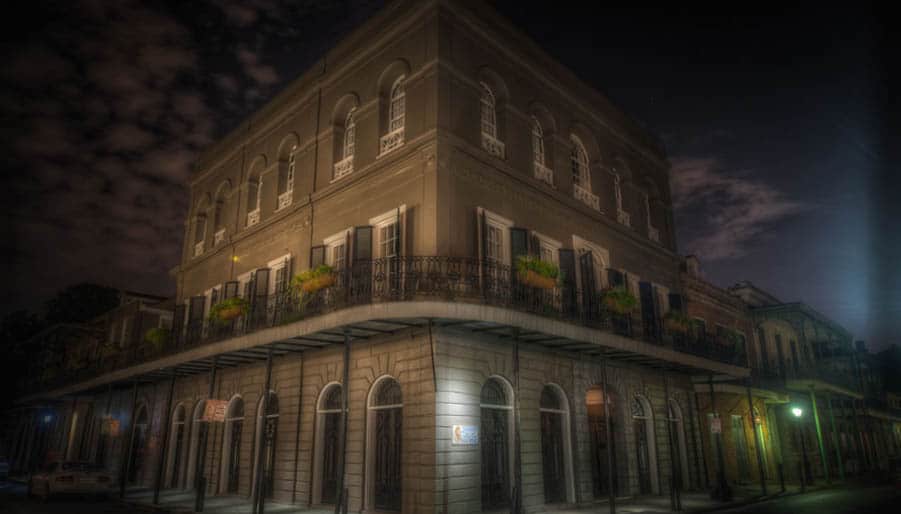 Former residence of the LaLaurie family, during the early 1830s, this Mansion bore witness to unimaginable cruelty at the vicious hands of Madame LaLaurie herself. Mistress to countless slaves, she caged, tortured and ultimately murdered many of the poor humans who came into her care. The true extent of her demonic behavior was only revealed after a fire broke out in 1834, and the charred remains of a dozen slaves were discovered chained to make-shift operating tables, their bodies sliced open.

Since then, the residence of 1140 Royal Street has been through many incarnations, but almost all subsequent owners met a tragic demise, their business strangely sabotaged and falling into ruins.

But not only that, spine-chilling stories of ghosts brandishing whips, former slaves in chains, shrouded figures and of course an endless soundtrack of disembodied cries, groans and screams have been reported by those brave enough to enter through the doors. 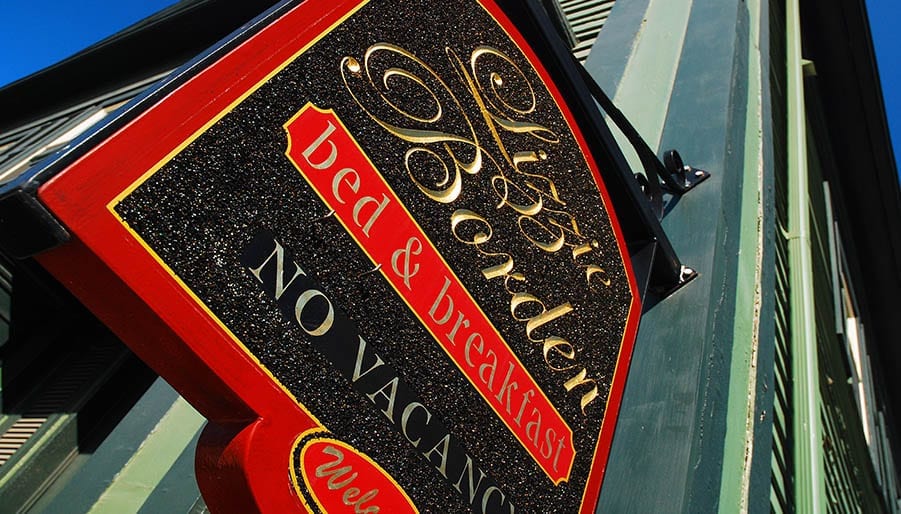 This unassuming house at 92 Second Street was actually home to one of America’s most notorious unsolved murders. On August 4th, 1892, Andrew and Abby Borden were both found separately bludgeoned to death with an axe. Andrew’s daughter Lizzie was home at the time and although being taken to trial as the chief suspect at the time, she was eventually acquitted for the heinous and bloody crime.

The house now operates as a Bed and Breakfast, and according to the current owner Lee-an Wilbur, who inherited the house, guests regularly leave mid-way during their stays, unable to handle the creepy atmosphere. Wilber reports seeing lights flicker and burn out, and doors mysteriously open and close, as well occasionally smelling as the mysterious scent of flowers. 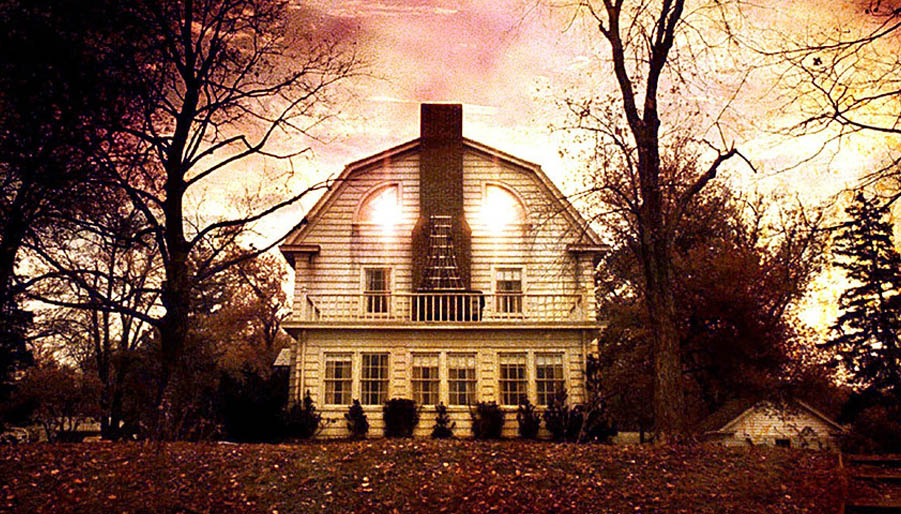 So extreme were the paranormal experiences of the Lutz family, that the book – the Amityville Horror – and subsequent series of films was based on their story, whilst living in this house.

Well-known as one of the most haunted houses in America (if not the world), this large Dutch Colonial residence, at 112 Ocean Drive, Amityville was the site of a horrific murder committed by Ronald DeFeo Jr, on November 13th, 1974. It was here, in this quiet and leafy New York suburb that he shot and killed six members of his own family.

Just over a year later, the Lutz – George, Kathy and their three children – family moved into the house and lived there only 28 days. They were forced to leave due to the horrifying extent of the haunting. Here are just a few examples of the terrors they endured:

Have you ever been to any of these haunted places, or any others not on our list?

Terrify us with your scariest real-life ghost stories … Share them in the comments below and let’s push the panic button!