All across America on July 4th, men and women don their favorite starred and stripped togs, hot dogs hit the grill and the biggest fireworks are lined up ready for a day and night of celebration.

If you’re living outside of the US (and maybe under a rock?) then you could be wondering what’s the occasion…? 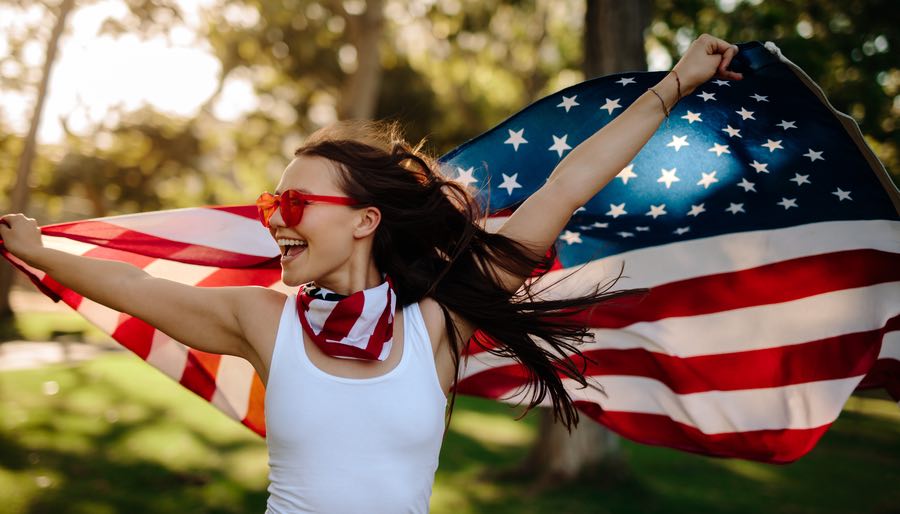 This is the day on which, in 1776, it was announced that the 13 colonies were no longer part of the British Empire. American independence was declared and the US was born!

Now, the moment of a person’s birth provides a blueprint of numbers (otherwise known as their numerology chart). This serves as a kind of instruction map to their path and personality. Well, did you know that Independence day has a set of numbers too – America’s very own Numerology Chart?!

Let’s take a look at a few of Americas core numbers and patterns, and see what if can tell us about the USA.  A Numerology chart can be mighty revealing if you know where to look….!

This powerful core number often reveals a talent or special ability that’s possessed by a person (in this case, a country!) Sometimes this talent is latent and waiting for the right opportunity to express itself. And sometimes it’s apparent in one form or another from very early on.

America’s birthday Number is the 4. This number is pretty iconic when it comes to talking about American independence.

So what are the qualities of the 4?

4 is a number of grounding. As grounding as the huge redwoods this country is so famous for. It is stable, tenacious and loyal. Consider the 4 corners of a square, the 4 elements, and the 4 directions. This number provides the basic building blocks of life as we know it: the firm foundations from which to grow and the strong container in which to be held. It has inherent talents for organization and structure and doesn’t mind delegating, sharing and teaching what it knows.

The progress the number 4 makes through life is stable and steady rather than erratic or unpredictable. And whilst it may lack some of the spontaneous or carefree qualities that other numbers hold, it’s dependable. It’s loyal. It won’t leave a job half-finished.

Interested in working out your own Birthday Number? Head HERE!

The determination of America’s Birthday Number 4 sits in stark contrast to its Life Path. This number is calculated using the full date of birth (or in this case, of independence) which is July 4th, 1776, and reducing it to a single digit:

Interested in working out your own Life Path Number? Head HERE!

A Life Path 5 sets out a journey of freedom

This number needs to feel unshackled. People who walk this Path have an inbuilt desire to explore, break new ground and seek out new territories (sound familiar?) But if left unchecked, this urge can quickly override responsibilities and relationships with others, lending this path a sometimes reckless edge. But the discoveries and stories these folk return with often make up for the trauma incurred…

This Path is an edge-walk

…One that it’s clear that the United States of America has been walking for the past 242 years, since its independence.

Interestingly, 32 is often regarded as the politician’s number, as it contains the expressive flare of the number 3 and the balanced diplomacy of the 2. Combined, these two numbers embody the fight for progress and the championing of a good cause.

It’s clear in the numbers, that underpinning America’s unending desire for freedom and expansion, is a deep yearning to do the right thing and improve the lives of everyone it touches.

This number describes how a person (or in this case, a country) is perceived outwardly. It describes natural talents, abilities, and potentials an individual has access to in this lifetime.

According to the second draft of the Articles of Confederation, which declared, “The name of this Confederation shall be the ‘United States of America”, the USA (without the “the”) has an Expression Number 3.

In this powerful position in the USA’s chart, the number 3 activates the expressive, creative character that we’ve already seen show up in America’s Life Path of 32/5!

The Number 3 reveals an inherently playful, fun-loving and artistic expression!

The revelation of this number serves as a powerful reminder that the US has produced some of the world’s leading creators. The Arts in America are SO wide-ranging. They include the film, TV and theater industries, dance, comedy, fine arts such as painting, sculpture and installation, plus the craft movements of old and modern times. Not to mention the creative, digital industries of this millennium.

Some of the greatest creative change-makers have been American, or have chosen America to become their homeland.

So for the United States of America to thrive moving forward into the future, is creativity where investment and support should now be going? This numerology reveals that the arts are where the true talent and potential of this great Country and its people lies.

Interested in working out your own Expression/ Destiny Number? Head HERE!

This is just a tiny taste of the United States of America’s Numerology. It’s a unique and fascinating country, relatively young in the world, but full of potential to shape the globe in unimaginably positive ways. And this potential is held by every one of its citizens.

And in the comments below, tell us what you’re doing to celebrate independence day – we’re partying along with y’all!