We Knew She Was Awesome But This Shocked Me! – Maya Angelou

By The Numerologist TeamMay 30, 2014Numerology 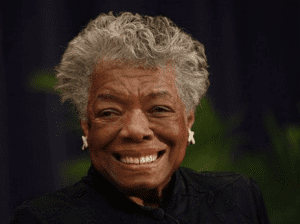 Poet, Best-Selling Author, Moral leader, Spiritual Muse … Maya Angelou was a woman who influenced thousands to be more real, more authentic and more decent human beings. Her passing is a loss to us all!

But this magnificent woman who moved great leaders to do the right thing did not come to her role easily. In fact, Maya’s past – like many of ours – was filled with problems no one wants to face. In fact, I was shocked to discover what she was doing by the time she was 17!

Maya came into the world and a troubled family in 1928. By the time she was 3 years old she found herself on a train with her 4-year-old brother headed to live with her grandmother during the pit of America’s Great Depression.

And despite the fact that her grandma’s circumstances were not nearly as bad as many during this time, life was not exactly easy.

Fast forward to her late teens, and Maya found herself a front woman for a group of prostitutes. (Yes, that would be called “madam”). And before that: a saga of rape, abuse, 5 years as a mute, and a dizzying amount of back-n-forth living arrangements.

Maya was born “Marguerite Annie Johnson” (number 3) she took the name Maya Angelou (number 7) in part from the nickname her brother had given her as a young child.

Maya’s chosen name, on the other hand, represents that inspired, inspiring “voice” of wisdom and presence which often comes from the inward reflection of a strong, 7 energy. Seven is also the number of her given, middle name, “Annie” – representing her Inner Self number.

Now here’s the real kicker: While many famous people might write an autobiography in their life times, Maya wrote … SEVEN!

How’s that for lining up with her Numerology!

QUESTION: Have you changed your birth name? Ever thought of doing it? What are your numbers for the different names you’ve had or would like to have, and how is that showing up in your life changes? Let us know below!