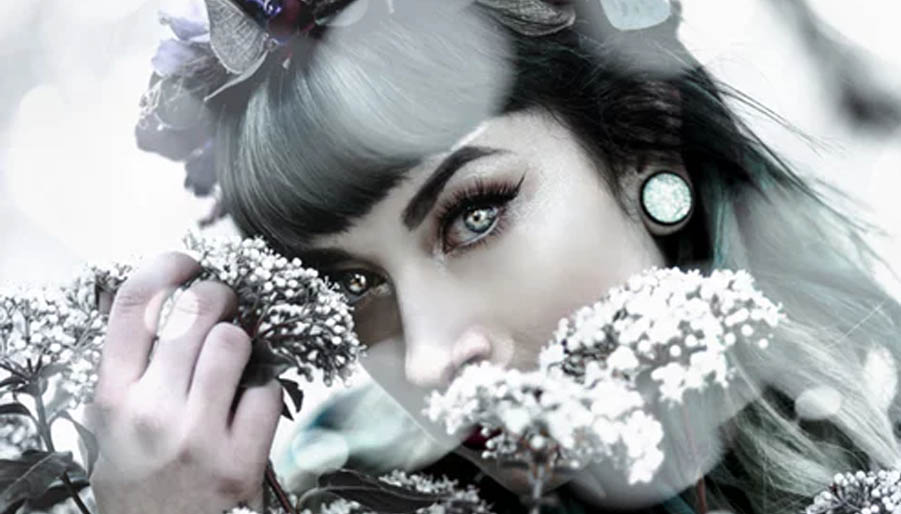 What’s with all the Witches?

Witches are everywhere these days. That might sound like the opening dialogue in a B-rated movie, but it’s the truth! Paganism, Wicca, and witchcraft are at a new peak in popularity. Given that most of us grew up with the idea that a witch was not only a fantastical being, but an evil old hag on a broomstick — what are all these hip young things doing going around casting spells and calling themselves witches?

What does it mean to be a modern witch?

READ THIS POST: THIS BROOKLYN PHOTOGRAPHER IS SHOWING THE WORLD THE TRUTH ABOUT MODERN WITCHCRAFT

…And more importantly… how can you get started?

Firstly, What IS a Witch?

Let’s start with the basics. What makes a witch a witch? (Insert “which witch” joke here.) A witch is someone who uses magick as a part of a nature-based spiritual practice.

*Witches add a “k” to “magic” to distinguish it from stage magic.

Magick is when you gather energy and direct it towards as intention.

Energy is a little harder to define but think of it as a universal life-force. When that energy is released into the world to create change, magick becomes a spell, and that, my pretties, is the main craft of the witch! 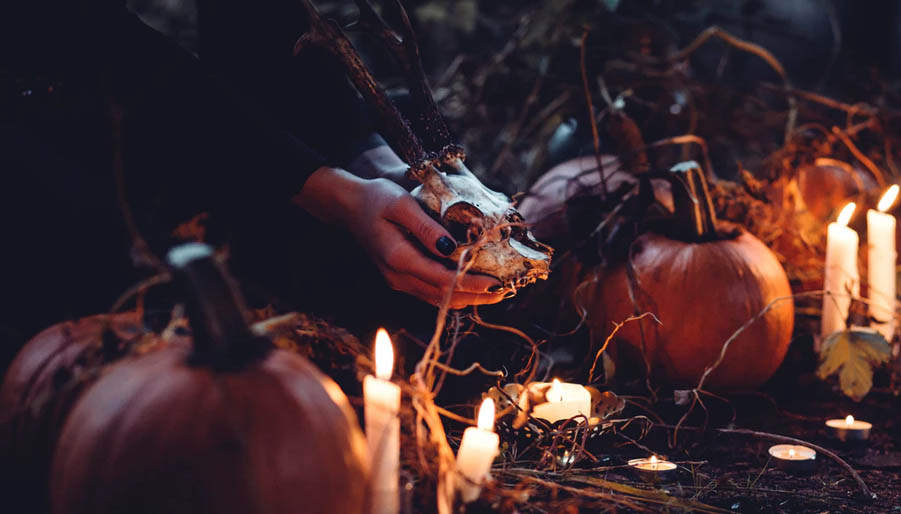 How do you become a witch?

Contrary to popular belief, you don’t need a black cat, secret training, to join a coven, or even to own a set of magickal tools to practice witchcraft. A book or two can be useful, but once you give some magick a try, and witchcraft becomes an essential part of your spiritual life, you might choose to identify as a witch. That’s it!

As your practice deepens, and you gain more experience, you may create an altar, collect some herbs or crystals, or a few good books. It can also be a great addition to your witchcraft practice to start tracking the Moon, as certain Moon phases are better suited for casting certain spells

Anyone of any religion can practice it, because it’s not necessarily a belief system. You can cast spells and do rituals and still keep your current beliefs (or non-beliefs!) You don’t have to be a part of Wicca, an occult tradition, or a Pagan. You don’t even have to believe it will work. While it’s a good idea to back up anything you do with historical background and the help of more experienced other witches, at its heart, witchcraft is free of hierarchy.

This free-spirit might explain why witches and their craft have been so vilified for so many centuries. Witchcraft empowers the individual at the same time as making communities stronger. If you are in the business of forced conversion and collecting wealth – as Christianity was up through the Renaissance – then witchcraft is a natural enemy.

Since women were relatively empowered in the Pagan and Goddess societies that Christianity replaced, the Church systematically oppressed women along with their witchy ways. The image of a witch as a thing of female evil and ugliness is a nice bit of blatant propaganda, still well and alive today.

READ: WHAT HAPPENED TO THE DIVINE FEMININE AND HOW CAN I RECLAIM HER? 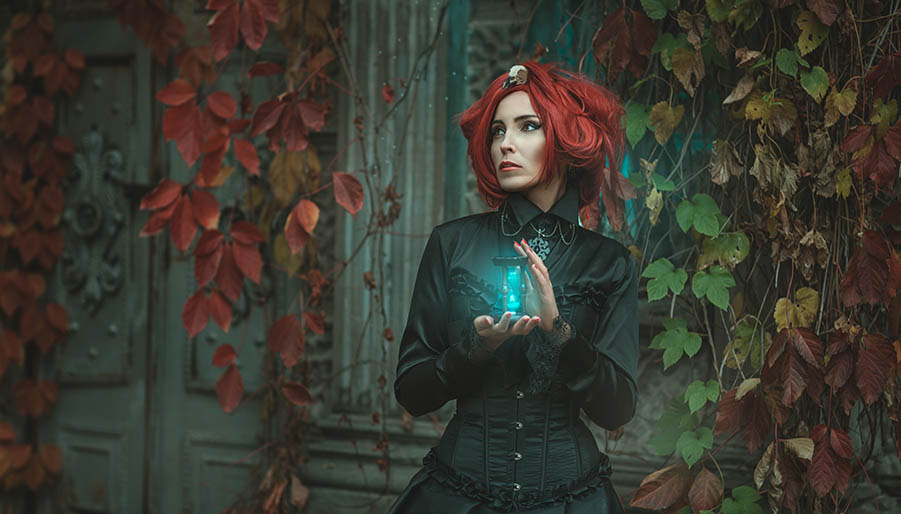 Feminism is making a come back with fresh faces and fresh perspectives. As women (and people in general) become empowered, they also look to their cultural roots as a source of strength. For most people who have Celtic and/or European ancestry, their roots are in the folklore of wise women, men and, yes, in most cases, witches.

Witchcraft and paganism – which have always lived on the fringes – are beginning to rise up into popular culture.

And suddenly, witchcraft is in the wind!

Four Steps to Becoming a Witch

There is no end to the books, blogs, and vlogs out there dedicated to the craft. Wicca is a modern Pagan religion and a good place to start. As you explore further, you’ll get an idea of the variety of other traditions and approaches. Let your curiosity lead you and enjoy!

Whether you’d like to join a religion (like Wicca) practice alone, or even aim to make your own coven, there’s a way to find your community online. The fastest way to connect with other curious minds is to join a beginner class. Look for online courses with a community aspect to them, or find live workshops and classes in bigger cities.

Learning is key, but the only way to actually practice magick is to practice! To cast an effective spell, you’ll have to have some ability to gather and direct energy (we’re talking in real-life, not just reading about it in books or on blogs!) Begin to play around with sensing energy (use the Good Luck Energy Ball Spell below as a launching pad!) Sensing energy is an intuitive skill, and intuition is closely tied to imagination. Don’t be afraid to imagine success until you find it!

Spells are magick in motion. They can be complex and esoteric, but they can just as easily be on-the-spot inventions. Anyone can learn how to both cast and make their own spells, but it’s best to learn the basics from a trustworthy source first. There are important ethical guidelines in witchcraft that go along with the responsibility of using such a powerful tool for change. 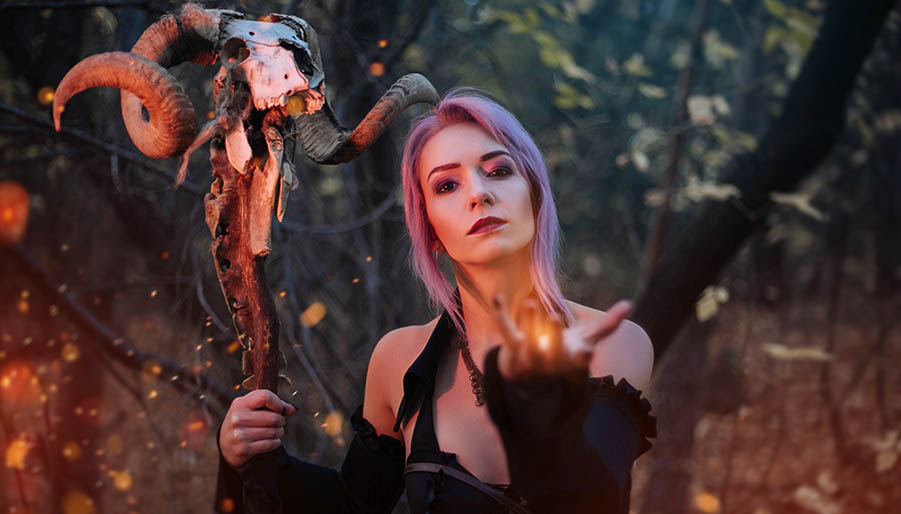 Two Witch Spells to Get You Started

Learn to gather and direct energy with this stripped-down spell for good luck!

Step One: Hold your hands in front of you and begin to throw an imaginary ball from palm to palm. Slow it down and feel resistance in the air, as though you were moving through molasses.

Step Two: Slowly bring your hands closer together until you are holding the ball between your palms. Imagine all that resistance has collected there and that it vibrates with electricity.

Step Three: Whisper these words into the ball, as though you were telling a secret to a little creature: Fly away in the wind and bounce back, little ball. Bring good luck for me, and good luck for all.

Step Four: Release the ball into the sky, as though you were releasing a bird. Shake out your hands to be clear of the energy and watch out for a good dose of good luck, coming your way! 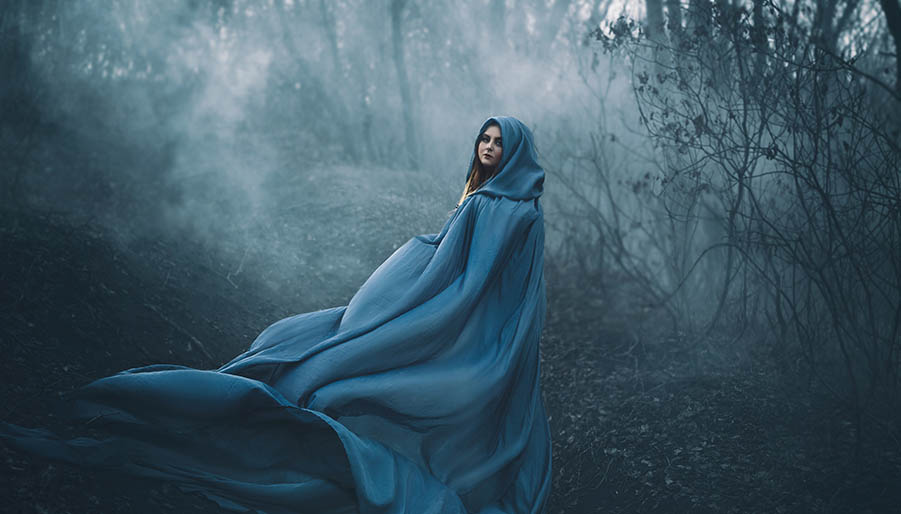 Bring the right kind of prosperity with some simple candle magick.

Step One: Gather a green candle, a slip of paper, a pen, matches, and an orange peel.

Step Two: Take three slow breaths and center yourself with these things in front of you.

Step Three: Write down these three things on the paper, keeping it simple.

Step Four: Rub the orange peel, white side out, all over the candle. The orange oil will make your spell swift, efficient, and positive.

Step Five: Put the paper, face down, under the candle. Light it every day for three days. On the third day, burn the paper, saying:

Step Six: Throw the ashes and candle stub in a body of water. Your spell work has been released. The universe will meet you with bountiful money making opportunities as long as you put yourself out there!

INTERESTED TO KNOW MORE? CHECK OUT THE POSTS BELOW:

Are you going to become a witch? Let us know in the comments.