Voodoo Much? These Alternative Magickal Religions Will Make You Rethink What You’re Capable Of

Magic and religion are often thought of in opposition to each other. In fact, all of the world religions use magic, (or magick, as Wiccans spell it to distinguish it from stage magic) usually within the esoteric part of the tradition. A good example of this is the Sufis. Sufis are an Islamic religious sect who use trance dancing to commune with the divine. This is a perfect example of magic used in the context of a major world religion. This article explores three religions that not only use magick on the fringes, but as the core of their religious practices: Wicca, Voodoo and Hoodoo, and Shamanism.

It helps to define the difference between religion and magick. Religions tend to focus on social structures and magick focuses of the individual. In that sense, religions are public and magick is private, even if it is within a religion. This may be why magickal religions are conscious of lineage, but mostly defy hierarchy and authority. Wicca is a good example of this. Both religion and magick use ritual, but in different ways. Religion uses it for worship and petition. Magick has an additional element of mysticism, not just for the holy and enlightened few, but as a part of any magickal act. In that sense, religious practice stands apart from the divine, but magickal practice stands right in it.

Wicca is the most popular neo-Pagan tradition and is also an official religion. It was founded in the mid-20th century in England and draws on pre-Christian traditions, especially from the British Aisles. It’s also influenced by the occult traditions of Europe, which are a hodgepodge of esoteric sources, from ancient Egypt to classical Greece and Rome. There are lots of interpretations of Wicca, but the most traditional worship the Great Goddess and the Great Horned God, who manifest the moon and the sun. Their eight yearly holidays follow the cycles of the sun and the seasons. 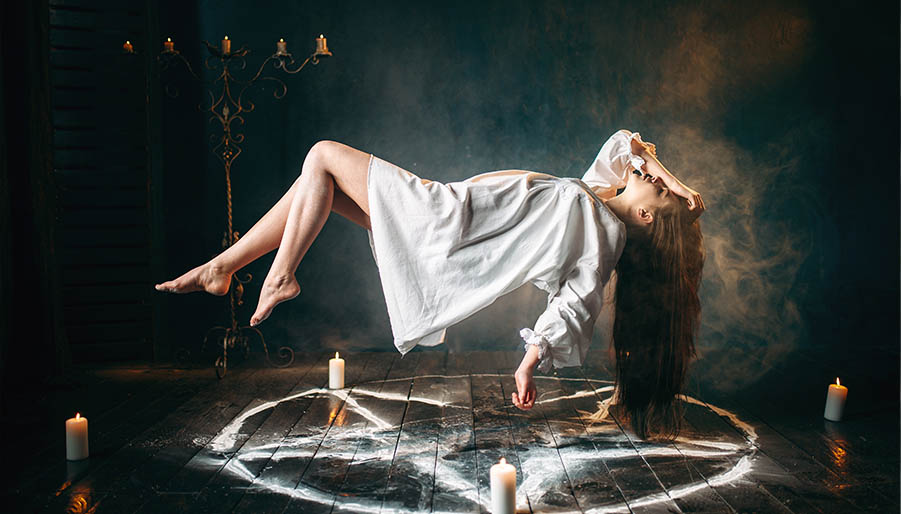 In addition to being a symbol of protection, the pentagram is the self-defining symbol of Wiccans, just as the Star of David is for Jews. The beliefs behind Wicca also lay hidden in the symbolic meaning of the pentagram. The five points of the star represent the five natural elements of earth, fire, water, air, and ether (meaning spiritual energy.) The circle represents infinity and the cycles of nature, as well as is a reference to the ceremonies of Wicca which happen within a circle. As a nature-based religion, the elements and the circle are the building blocks of the Wiccan world view. Begin to connect to the power of sacred nature by using this pentagram spell for protection.

Gather some salt, a permanent marker, a jar with a lid, and the seeds of an apple.

Put the seeds inside the jar. Feel free to add any little objects from your home that feel symbolic of what you’d like to protect.

Use the marker to draw a five-pointed star on the inside of the lid.

Air and water. Earth and Fire. Ether brings them all together.

Circle all my blessings tight. Protect this place and all that’s right.

Screw the lid on tight and find a place nearby to bury the jar. The pentagram brings balance and protection, and will keep you and yours in natural harmony!

Voodoo is the magickal religion of Haiti. It is a syncretic religion, meaning that it is the product of more than one tradition combining together. In this case, the two religions were African polytheism and Roman Catholic. Voodoo belongs to a family of magickally minded traditions all descended from Africa. They can be found in the West Indies, Latin America, and the United States. They are actually a family of independent traditions and religions with the same magickal root system, but for the sake of talking about major magickal religions, we will treat them as one. The mojo bag to attract love below is from Hoodoo, the magickal tradition of Americans with African ancestry. Hoodoo, or Rootwork, is a combination of African, European, and Native American practices. 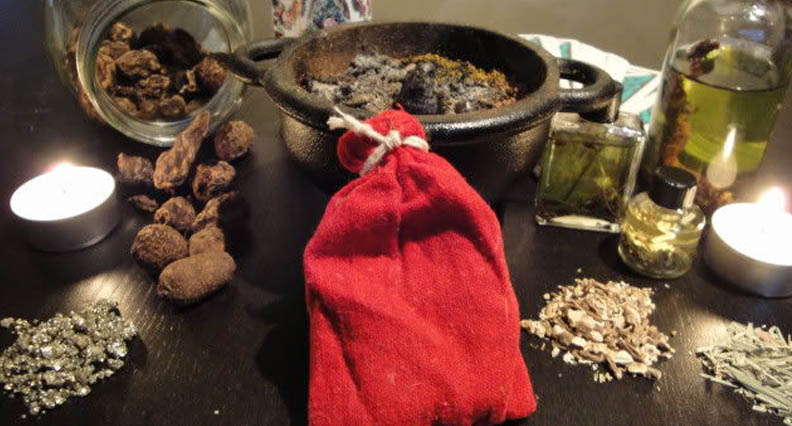 A Mojo Bag is traditionally made up of a cloth pouch which is filled with symbolic stones, herbs, oils, and objects. It is thought to gain real power, and become a kind of magickal being over time. It’s often made with a small sack of red linen, which is also perfect for our purpose below — attracting love. Keep the bag close to your person and in secret. But, word to the wise! In magick, it is fine to open the doors for love, or even a type of love, but never to try and manipulate a particular person.

Gather a small red drawstring sack, a pinch of sugar, a rosebud, a sprig of rosemary, and some almond oil.

Put all the solid ingredients in the bag and knot it twice. As you knot it, describe your love intention in three words, out loud. Anoint the knot with the oil and say, “With this oil, I bind you to this purpose.”

Reactivate the bag every month on the new moon. Anoint the knot with the oil again, saying, “With this oil, I activate you to this purpose.” Do this for one year, and make room for the love you desire to enter your life!

Shamanism isn’t really a religion. It’s more like a spiritual starting point, like monotheism is the starting point for Judaism. There are thousands of shamanic traditions out there, from every part of the world, often among indigenous peoples. Some scholars say that every society started out as a shamanic society.

A shaman is a healer who uses altered states to contact the spirit world. Most often, these “journeys” are made for the purpose of physical or spiritual healing. Shamans hold the place of priest, doctor, and wise man or wise woman in their communities. A magickal worldview is essential to the practice, and many of the ritual tools and techniques of shamanism cross over to witchcraft. It could even be said, that contemporary witches have created a modern interpretation of European shamanism, in some cases. 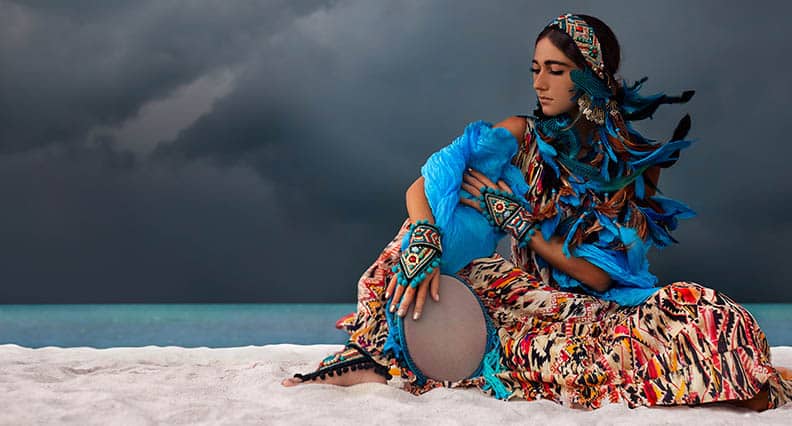 Altered states can be reached in a variety of ways, such as fasting, spinning, and taking plant medicine. The fastest way, however, is through rhythm. Drum rhythms create vibrations that interact with the vibrations of the body on a deep cellular level. It is said that certain rhythms can heal specific ailments. The image of the hollow bone is often used to help people become more open to receiving spiritual energy.

You’ll need: A drum or something to drum on. A recording of shamanic drumming works as well, but is less powerful. You can improvise a drum with a plastic container with a lid, an empty five-gallon tub, or an empty oatmeal canister.

Take a few deep breaths and empty your tension into the ground.

Imagine yourself as a clean hollow bone. You are a long, gleaming white tube, ready to be filled with the spirit.

Begin to drum. Start slow and steady. When it begins to feel natural, add the visual of yourself as a hollow tube back in. Feel the spirit run through you from end to end, and out into the earth.

Continue to drum. As you feel your energy heighten and your mind relax, you can make way for different drum beats, inspired by the spirit.

When you are ready, gradually slow the rhythm. To signal the end of the ritual, beat the drum four times, hard.

Take a deep breath and send any remaining energy out into the earth. Let yourself come back to a normal state of mind slowly. You are building the skills to connect with spiritual energy that will aid you in any kind of magick you desire!

5 Christmassy Things You Do That Prove You've Been A Low-Key Pagan This Whole Time!
These 5 Enchanting Tips From A Real Witch Will Make You Live A More Magical Life
How To Create A Witchy Garden: 10 Things You Need To Create A Sacred Pagan Garden