The Pisces New Moon arrives on February 23rd, bringing with it a whole lot of sleepy vibes and reverie. This is a gentle lunation: mystical, whimsical and otherworldly.

Yet before you dip back under that duvet, hold up! The cosmos won’t let you slip away that easily. With a good dose of Capricornian energy (yup, it’s not over yet!) and Mars playing his fiery part, there’s more to this New Moon than meets the eye… 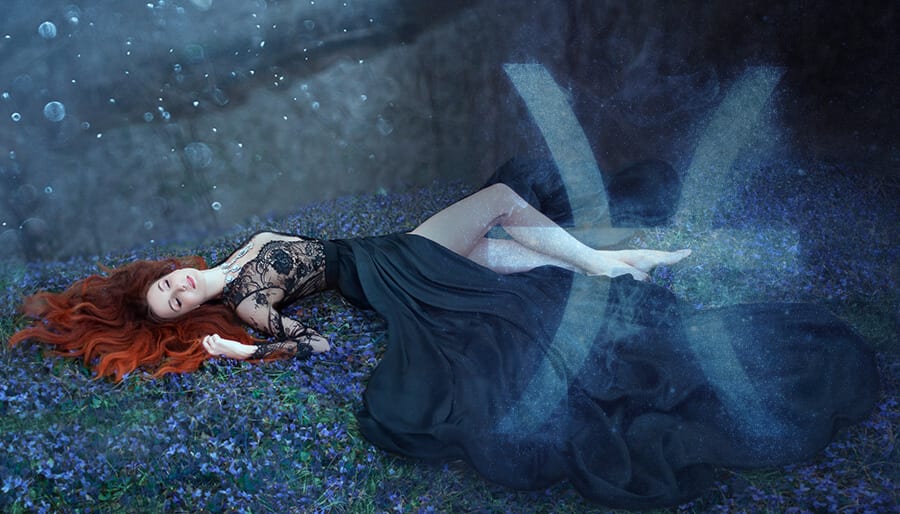 This makes a pleasant change, don’t you think?!

After months of going on and on (and on and on) about Capricornia, and the mighty weight this Zodiac sign brings to bear, Pisces enters the room.

Yes, there are still four planets in Capricorn at the time of this New Moon. But there are also four planets over in Pisces. So right now, earth is being balanced by water.

What change does this bring?

Water changes shape. It floods the deepest depths it can reach, yet is able to evaporate into virtual nothingness. This shape-shifting energy comes in stark contrast to the hard edges and unbreakable boundaries of the sea-goat. After months of red tape and coloring inside the lines, Pisces shows us how to blur them.

It’s an energy that feels good at the New Moon phase. This is a dark and fertile time, the emergent beginning of the lunar cycle, and not really the time to be rushing around, expending energy, or taking center stage and performing for the crowd.

It’s quiet. Imprecise and unsure…. Though these aren’t bad things to be. Patriarchy would lead us to believe that defined goals and a clear route to success are what’s needed. Yet the energy of the New Moon is ripe with any potential. Set any one of them in stone too soon, and you may get in your own way of greater things.

So this Piscean energy of dreamlike, nebulous, boundlessness sits just about right in this phase. It may feel uncomfortable – how often are you actually allowed to remain in this state of unknowing? Yet stay here a while.

Here are 3 Ways to drink it in…

Did I mention there are 4 planets in Pisces right now?

Sun and Moon sit conjunct at 4º. Then there’s Neptune, Pisces’ ruler making his slow, steady route across the sign, currently at 17º, joined by Mercury currently retrograde (had you heard!?) at 9º of the sign of the fishes.

This veil of Piscean energy serves to awaken the creative, imaginative, blue-sky parts of the heart and mind. Dreams get bigger, deeper, more vivid and wild.

But this isn’t time to put the dampers on, reining yourself back in and figuring out the “hows”. Pisces doesn’t care, and nor should it. This energy is boundless, indulgent and God-given.

Write down your wishes.

This New Moon influx of idealism is gift, so dive into it.

Mercury rules the mind: our cognitive, conscious workings and the way we share this with the world (which is why our communication highways always seem to take the hit when this planet swings into reverse). Yet here in Pisces, the zodiac sign of the subconscious realms, Mercury takes on a more inspirational, intuitive, spiritual role.

All of a sudden, small talk with the neighbors becomes something more meaningful – a way connect to a deeper truth than just what the weather’s doing.

That day-to-day list of tasks you scribble down becomes a set of sacred tasks, a way of weaving your personal magic into the world.

And that journey you take across town (even delayed in traffic for 30 minutes, thank Rx energy!) becomes gridwork – a connective line of light imprinted onto the surface of the Earth.

Not only is Mercury retrograde from February 17 – March 10, but both Jupiter and Saturn have entered their pre-retrograde shadows. This means that they’ve both crossed the limits of the astrological degrees that they’ll be backtracking over when they station retrograde later on this year. (Both will retrograde in May).

This is nothing to be concerned about. Instead, it’s something to use to your advantage. Start diving in, drilling down and taking a little more care and conscious intent with what you’re doing.

Remember the “re” rule with retrogrades? They encourage us to re-evaluate, re-search, re-asses, and basically just take another, deeper look at life. It starts now. So be brave, dip your toe beneath the surface.

A beautiful and powerful earth trine graces the skies at the time of the New moon, with Mars at 4º of Capricorn, and Uranus at 4º of Taurus. What’s extra special about this is that Sun and Moon are caught right at the midway point between these two punchy planets, at 4º of Pisces, as you know.

Mars and Uranus aspecting like this is fiery, transformative and electric astrology. With the sheer force of will that Mars brings, plus the shattering, change-making influence of Uranus the Awakener, this New Moon is set up for powerful action. That’s not to say you need to take it, just yet (remember, Pisces is the ponderer…)

The potential is there.

The thoughts are being mustered.

The future is being dreamt into being… SO allow it! Encourage it! Open up YOUR mind, and heart to what life could become.

This New Moon in Pisces calls on us to be the visionaries of the future.

What are you manifesting?