Children Of The Zodiac – The Pisces Child: Intuitive, Brilliant & Imaginative 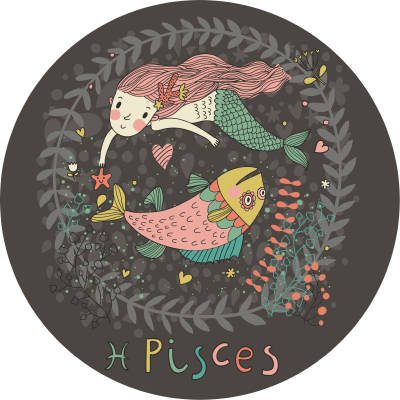 The Pisces child, born from February 19 to March 20, is acutely tuned in to the energy around her. Because of this, she takes in more information about her surroundings than most, and she breaks away from that by having a good amount of time alone. Her need for alone time must be accepted, as this is how she resets.

During her alone time, Pisces child’s mind wanders through the depths of her imagination. She may come to you with vivid stories concocted in her brilliant mind. When she shares her stories with you, accept her enthusiasm about the pictures she painted with her mind’s eye. Such fluid imagination may seem useless to some parents, but keep in mind that the Pisces’ imagination is unlike others. Although surreal at times, her imagination will help her navigate various areas of life in ways that others cannot, and succeed where others may fail.

As a parent who would want nothing but the best for Pisces child, keep in mind that during childhood her objective, subjective and creative thinking must all be balanced in order for her to flourish as an adult. Being a water sign of mutable nature, Pisces child is one who can get carried away by the tides, or influences, as if she has no control. If Pisces child gets carried away with her imagination too often, she may form a tendency to escape from the real world. On the other hand, if she is exposed to the real world too often, she may see more negativity than she was prepared for, and can become pessimistic and suspicious of the world around her. Additionally, if she is consistently subjected to beliefs or thoughts of extreme nature, she may adopt these thoughts and beliefs as if they were already ingrained in her. Especially as a child, the real world is an uncomfortable place that Pisces child can easily get lost in. In order to keep her balanced and grounded, it is up to you to show her how to be accepting of her surroundings without being overly influenced by them.

Although Pisces child may be taught to be accepting of her surroundings, you may notice that she does not integrate herself into them. As a parent, you can show her how rewarding it is to have people in your life who you can trust and feel at ease with. Bring your close friends and family around Pisces child she she can see how you openly interact with each other. Emotional intimacy, trust and love are all concepts that are mutually received – if she is not willing to give any of these, she will not receive them either. Also, be sure to let Pisces child know what it takes to build close and trusting relationships!

Pisces child is very sensitive, and her sensitivity can often activate in ways that most people cannot see. This sensitivity can be brought on by undertones of words, actions that disrupt her inner currents, energies that she picks up from others, and inconsideration that she would naturally take into account for others. Her sensitivity causes her to pick up tension between other people. Pisces child is very in tune with others’ feelings, and can also be influenced by them. She can be hurt by roughness around her. If there is any tension at home that does not involve her, make it a point to let her know that she did not cause this tension. Because of her sensitivity to other people, Pisces child may build up a defense mechanism to emotionally and spiritually shield herself from others. This is the reason why many Pisces are seen as standoffish. Even as a parent, chances are that you don’t really know your Pisces child as well as you think. The best way to break this barrier is to open up to her, and invite her open up to you without judgement.

Because she is compelled to take advantage of opportunities presented to her, Pisces child is inspired to participate in various activities. She may take a liking to creative activities such as acting, dancing, painting or writing. She may even gravitate towards sports, especially since sports have a way her making her focus on one thing despite the energies around her. In fact, being active will renew her energy. If she is not involved in sports, at least take let her play in a backyard or a local park regularly. Symbolized by the Fish, Pisces child also loves being close to or in large bodies of water. It is implied that Pisces child has lived many lifetimes before, as her sign is the last of the zodiac. You will be astonished by her understanding of the world. She looks upon the world around her with a gaze of wisdom as if she has experienced this before. Pisces child has a unique kind of intellect – she is scientifically bent as well as intuitive. If you acknowledge and encourage her intuition, she can develop her skills to become successful a a psychologist, healer or an oracle with uncanny foresight.

Pisces child needs to know that you will love her and support what is in her best interest no matter what. She is one of the most kind-hearted and caring signs of the zodiac – even if she disappoints or upsets you, know that her intentions are pure. The best way to discipline Pisces child is lovingly and with compassion. When she does something to upset you, it is best to appeal to her sense of humanity to get her to understand your point of view. Explain how her actions make you feel, or guide her to understanding how she would feel if someone were to treat her the same way. She also needs clear direction when she wants to make things right. Pisces child often picks up on other people’s feelings without fully understanding the cause and effect of actions. Guide her to understand the cause and effect pattern of life without too much discipline or punishment, or she may start to think it is normal to sweat the small things. Pisces is born with a wiser and broader view of the world than most, and to spoil that would be a shame.

If you are not in touch with your imaginative side, it is possible that you would have a hard time relating to Pisces child’s imagination. You will find that she goes on tangents when she tries to explain her viewpoint or vividly paint pictures with her words. Some adults might feel that Pisces child exaggerates the truth. If this is the case, keep in mind that she simply sees the world vividly, and is just sharing her perspective. Pisces child often spends some time living in a fantasy world without “real world” constraints such as time or obligations. It is best to encourage her imagination, as Pisces child can easily be one-of-a-kind in her career. Many Pisces grow to be successful authors or film directors. This is also the case for people with planets in Pisces, which a professional astrologer can help you decipher. It is also possible that you will find Pisces child interested in spirituality or metaphysical interests at a young age.