Minor Arcana - The Three of Wands

The Three of Wands shows an adventurer on the precipice of a cliff overlooking the vast and mysterious seas. He wears the same headband as the Magician, and also grips a wand, indicating that he is the visionary or mastermind who has set things in motion. Most often this card symbolizes accomplishment, fruition or a period of completion.

The man stands with a certain pride and sense of contentment, as though admiring the results of his hard labor, or watching the operations he has set in motion now function all by themselves without his instruction or intervention. The card signifies material or career success, like the two of Wands, but also peaceful, serene contentment, as distinct from figure in the two of wands, who feels somewhat walled-in by his own success. The man in the Three of Wands stands calmly observing; he is not gripped with immediate hunger for new experience and the next adventure, but is happy to rest and enjoy the sense of pride and well-being that his accomplishment has brought about.

The Wands here are planted deeply in the ground, which signifies a union of Fire and Earth (correlating to the Pentacles suit)—  that is, adventurousness, love of conquest and expansion bolstered by practicality, discipline, cautiousness and a need for security. This card thus symbolizes retaining a firm foundation— or continuing to honor a previous commitment— even while expanding into new ventures.

The ships that sail the sea beneath the traveler’s gaze may be carrying his goods or services to different lands, or making explorations and conducting research according to his direction, yet he remains confidently standing on the shore, “holding down the fort” while others advance his progress on his behalf, and he is not tortured or jealous of their adventure, but proud of his self-control and effective leadership. The water of the sea in the image on the card represents the asset of relationships and teamwork in a project or undertaking, as well as “the great unknown” into which a fiery temperament loves to venture and explore.

The Three of Wands card is connected to Mercury in Leo, as the confidence in the future and breadth of vision. Three of Wands is also in the harmonious aspect with Saturn, as a reliable basis.

The Three of Wands card can mean that you are a writer or have a writing job, and may soon be living a new and exciting opportunity through a reward, promotion, or chance to succeed.

When the Three of Wands card is reversed, it may indicate that rewards or payoffs in your life are being delayed. You may be dealing with disappointment, arrogance, conceit or find that you are unable to cope with demands being put upon you. 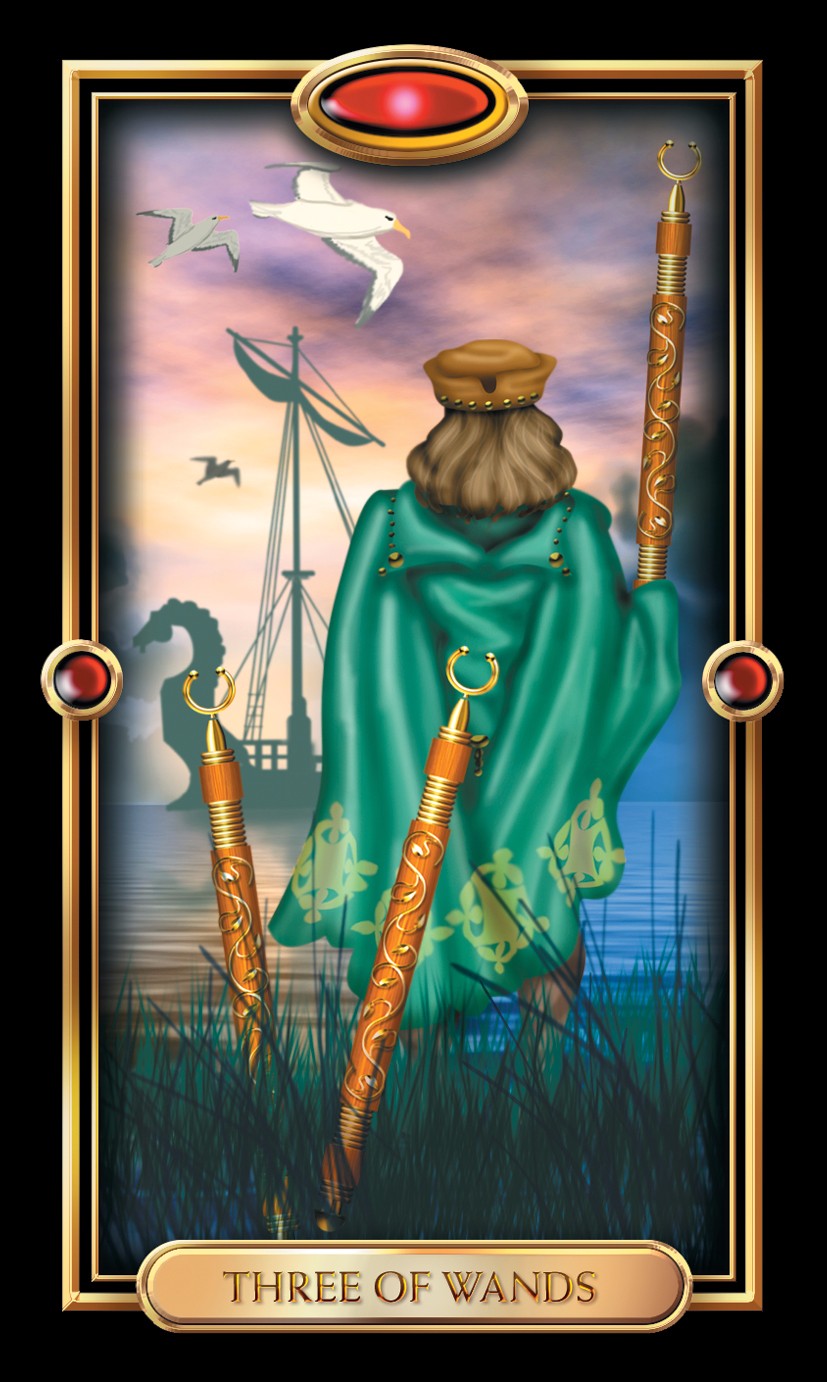 The Three of Wands card can indicate that you have much to be proud of in your work performance, even if you have not been rewarded in the workplace as you had expected. If you are looking for work, you may soon find a position that is better than you expected, so keep your head held high and know you have much to offer.

The Three of Wands card may mean that things are going quite well in your love life as long as your partner treats you as an equal. You may eventually need to move on from such a relationship if things do not change upon voicing your concerns and feelings. If you have recently met someone new, they likely hold you in very high regard. If you are feeling open to love, and think you don’t have any options then you may be spending too much focus on your career. You may need more time for yourself and your personal life.

The Three of Wands card can indicate that things are looking up in your financial life, and your hard work is already reaping rewards even if you cannot see them yet. You may need to take care not to overextend your resources. Sharing your wealth can open up the opportunity for your financial prosperity to flourish.

The Three of Wands card may mean that you already have a somewhat mature and sensible belief system or spiritual viewpoint in your life. Even so, if you are paying attention to things in the universe around you, you may be growing and changing spiritually as time passes. You do not need to fear change or new information in your spiritual life.

Previous Card: The Two of Wands

Next card: The Four of Wands