Minor Arcana - The Ten of Wands

The Ten of Wands shows some one who has taken on far too much, or one who is now burdened by his own ambitions. One of the central attributes of the Wands suit is enthusiasm, which is of course a wonderful quality in almost any situation. Yet enthusiasm that becomes scattered, or enthusiasm that is not matched by an equal amount of pragmatism and measuredness, means spreading oneself too thin, not being able to finish what you start or flimsy foundations which fall apart the moment they are put to the test.

The Wands suit is defined by confidence, a love of life, and even a love of conflict; people with Wands suit dominating in a reading may feel invincible, inspired, and capable of accomplishing anything they put their minds to. Yet the ten of Wands suit is here to remind us on the one hand that we must direct our energy toward one thing at a time, rather than trying (and probably failing) to accomplish too many things at once, and, on the other hand, that it is not enough just to enthusiastically ignite a project with the animating idea.

While people with a lot of Wands influence are somewhat given to starting projects in an excited state and then quickly abandoning them when something new comes along, the Ten of Wands shows that there is only so long that approach will work until we get caught up in obligations anyway. Investing your energy somewhere inevitably means that you will acquire new obligations and responsibilities which you may or may not have foreseen; once the immaterial “spark” of the idea has become a physical, 3-D fire roaring in front of your eyes, it is your duty to feed it, guard it and keep it from burning down the forest. The ten of Wands shows some one who has had too much inspiration, or has been too eager for everything, and now resents all the responsibilities that have come in its wake.

The Ten of Wands card is connected to Saturn / the Sun as a symbol of gloom and severity in the soul, or Saturn in the 11th house as an image of hopelessness.

The Ten of Wands card may represent a need for hard work or accepting responsibility in your life. You may struggle with telling others no, and might often get taken advantage of by others as a result. Now is a good time to focus on the big picture to help you gain perspective in your life.

When the Ten of Wands card is reversed, it may indicate a fear of responsibility or an inability to keep up on the obligations you have in your life. You may feel unmotivated and wish to walk away from your duties, responsibilities, or hard work. 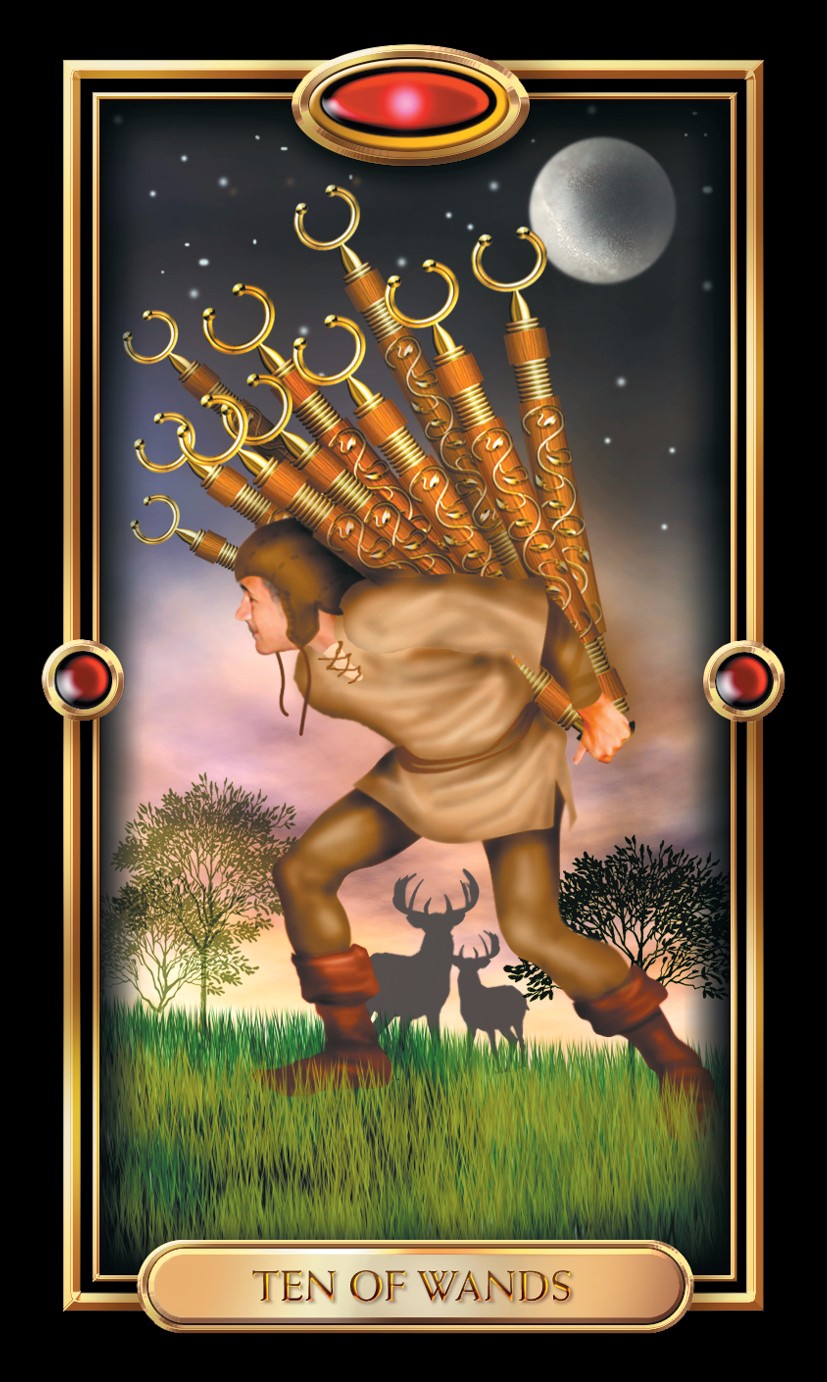 The Ten of Wands card may mean that your workload is too heavy to manage realistically. You may need to ask for help to complete your work or seek the guidance of your supervisors or colleagues to help you prioritize projects correctly. If you are looking for a new position, you may soon find what you are looking for is you keep trying and remain positive.

The Ten of Wands card may represent a difficult time in your love life. Your partner may be going through a rough time in their life that has nothing to do with your relationship, but may need extra love and support from you. You may also need to examine aspects of your romantic relationship with honesty and openness as well. If you are looking for love, now may not be the best time to begin a new relationship. You may need some time for rest and reflection before you are truly ready for love.

The Ten of Wands card may mean that you are feeling overextended and stressed in your financial life. You may need to calmly make plans and be creative in your problem-solving strategies. If you need help, you may need to ask for it now.

The Ten of Wands card can signify that you may need to spend time taking good care of yourself right now in order to grow. You may need to ask others for guidance or let go of something things that have been burdening you in your life.

Previous Card: The Nine of Wands

Next card: The Page of Wands