Minor Arcana - The Ten of Swords

The Ten of Swords represents obsessive thinking, melodramatic thinking, finality, “beating a dead horse” and overkill. Sometimes this card points to a moment when the cold, hard facts are finally realized and accepted, and one submits to fate without resisting it any longer. The end has come, and we can no longer prolong or deny it. On the other hand, it might signify “thinking something to death”, or the failure that will definitely come from trying to reason your way through a conflict that actually requires spiritual intuition or emotional consideration. We cannot hide in the refuge of logic and reason forever. Sooner or later, our neglected, feared, repressed emotions will erupt and overwhelm the conscious mind, forcing us to pay attention to how we feel. The presence of water behind the defeated figure may suggest that a hardship in life is throwing you back upon yourself for a period of introverted, emotional reflection.

There is a hint of relief in this card, suggested by the darkness of the skies giving way to the dawn of the sun, as though one finally gives up “figuring it all out” and breaks down, partially in exhausted despair yet perhaps also with a sense of freedom in the resignation and surrender. You may be defeated, but at least the fight is over. And the light always returns. It’s always darkest before the dawn. With the storm over and the damage done, life can now finally begin anew.

In a way, this card is the moment when the deepest, darkest fears of the Nine of Swords have finally manifested. Whether it is as bad as we’d feared or not, we are now freed from the shackles of worrying about it. We can shift our attention instead to things we can to do improve the situation.

The Ten of Swords is connected to Mars / Saturn as a symbol of an artificial, violent end.

The Ten of Swords card can represent endings, loss, betrayal, or lack of support in your life. You may be feeling like you have reached rock bottom and that there is no end in sight for your suffering. It may be though, that you have survived the worst and your suffering will soon come to an end.

When the Ten of Swords card is reversed, it can indicate that you might be holding onto the pain others have inflicted upon you. You may be feeling or lack of support or experience deliberate sabotage in your life. Beware of those you keep in your company, as you may be lured into a deliberate plan to blame you for the misconduct of another person. You may also be prone to making costly mistakes if you are too tired or worn down. 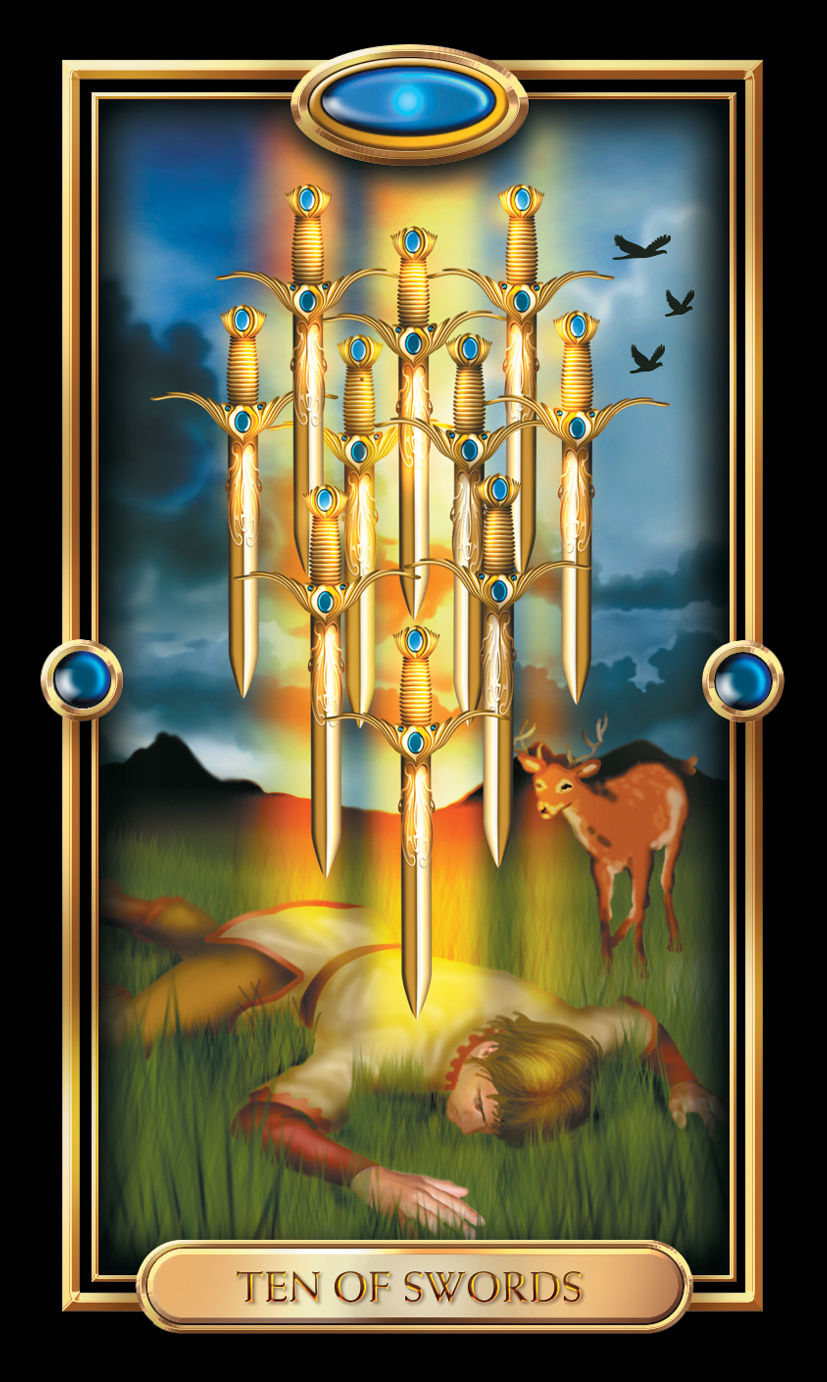 The Ten of Swords card can indicate that your employment may soon some to an end, so it is important that you have safeguards in place should you lose your job soon. Someone at work may be treating you poorly, but this is not a time for revenge, but a time to move forward without looking back. If you are looking for work, you may not get a job you’ve been hoping for.

The Ten of Swords can signify bad omens for your relationships or romantic life. You may find that your romantic situation is not right in some way, and you will need to ask questions, accept reality, and be open to truth while understanding that you cannot force another person to love you or respect you. If you have recently met a new love interest, you may need to just keep looking as this person may not be who they seem.

The Ten of Swords can indicate that you will be facing a disappointment in your financial life. Now is not the time to gamble, but instead take a good look at the state of your finances and consider how you can improve your situation. If someone you trusted has failed to come through for you on a financial deal, you may need to refrain from blaming yourself and instead focus your thoughts in logical, reason, and solutions.

The Ten of Swords card may represent the release of a long-term spiritual belief that has been burdening you or standing in your way. You may need to be cautious of spiritual leaders if they use your best interests against you in order to profit monetarily. You may decide to take a break from the past, and while it may be painful, it will likely benefit you greatly.

Previous Card: The Nine of Swords

Next card: The Page of Swords