Minor Arcana - The Six of Pentacles

The Six of Pentacles represents sharing, charity, dispensation of wealth or resources, balancing income and outcome, hierarchy, power dynamics and domination. A simple reading of this card indicates some income or benefit— not as much as is suggested by, say, the Ace of Pentacles, but enough to live. This may be a salary which provides for the essentials, or, alternatively, it may represent a job which provides a decent income but which is not rewarding or fulfilling in any other way. This card may represent an institution or organization that you work or operate in, or, if you identify with the figure who is dispensing the wealth, employees or people who must answer to you.

The card relates an interesting lesson as to the nature of balance and reciprocity in the world. It is true that some people have more, and some people have less, that some people are in charge and call the shots, and some people are the followers (or victims, depending on the situation) of these decisions. The people who appear to be begging, however, are not in chains, and they are not being forced into submission. The one receiving money does not even appear to be poor, yet still he is begging. This shows, on the one hand, a truth about manifesting abundance, which is that we receive in direct proportion to our own conception of abundance. The rich man handling the wealth is standing, suggesting self-confidence, self-respect and self-worth; as a result of this, he has plenty to share. One of the kneeling men is actually receiving money, and not coincidentally he is the better dressed one. This suggests a mixture of self-respect, but still an attitude of lack. Thus, he receives some abundance, but probably only enough to make it through the week. The shabbiest of the three is completely ignored by the other two. He is in a position of total powerlessness, and thus receives nothing.

The meaning here is that, whether we are conscious of it or not, sometimes we “sign up” to be in positions of powerlessness or victimhood in our very attitude to life. Examine where you have beliefs about limitations on your own personal power to affect your circumstances, or where you are giving your power away to some one or something outside of yourself. Alternatively, if you identify with the standing figure in the card, look to where you may be holding onto a sense of superiority, love of dominance or control over others.

The Six of Pentacles card is connected to Jupiter in Pisces as the willingness to help, Jupiter in Leo as generosity, and Jupiter in Aquarius as tolerance.

The Six of Pentacles card can mean that you are kind and warm-hearted and give generously to those who have less than you, or you may receive generosity from others in a time of need. You may be paying or earning wages from a business, and sharing your wealth to benefit others and create stability.

When the Six of Pentacles card is reversed, it can indicate a lack of generosity in your life. You may be experiencing cruelty and greed rather than sharing your wealth and kindness. You may be unable to give due to spending more than you earn or borrowing more than you can afford to pay back. 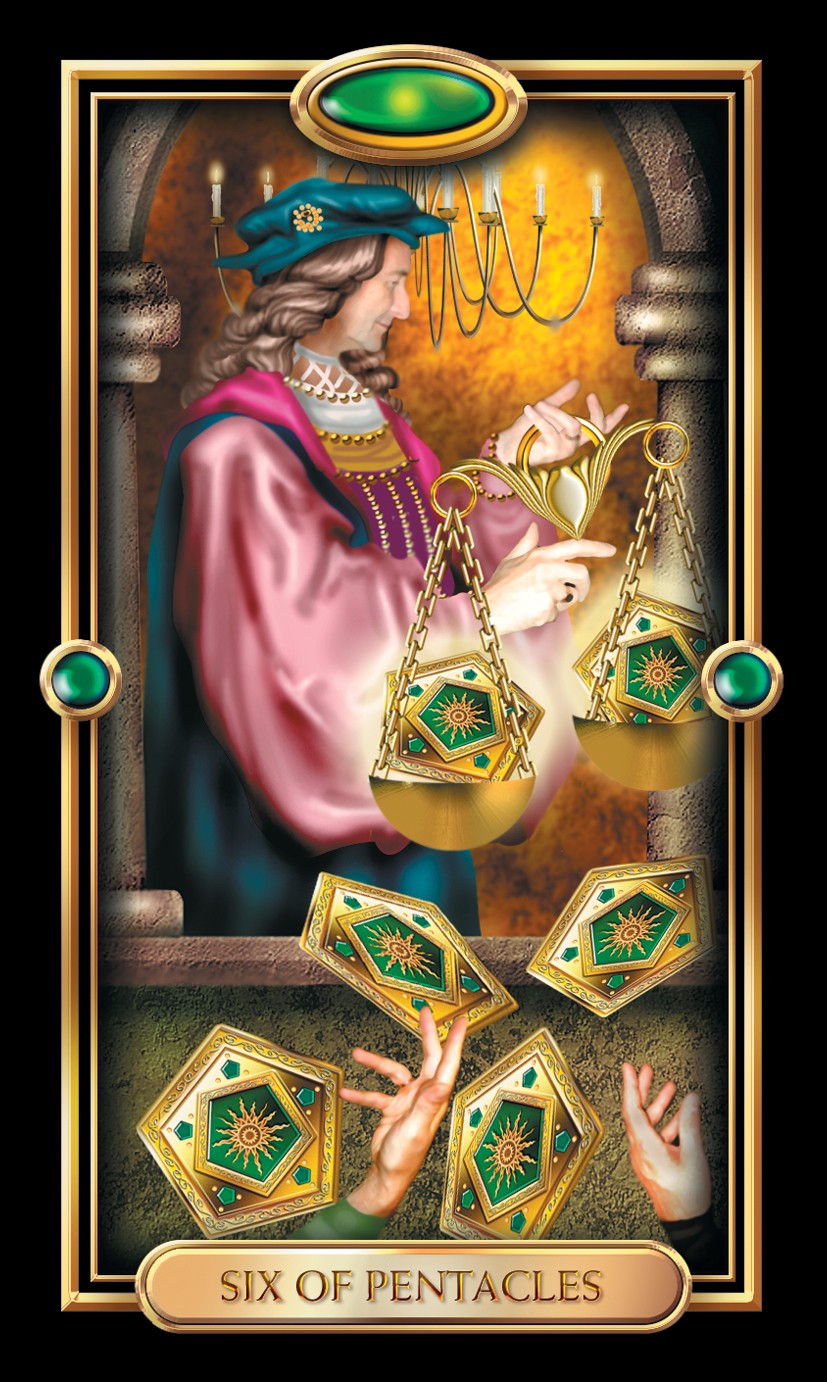 The Six of Pentacles card may indicate that things in your work life are going to get much better quite suddenly. A powerful person is likely to support you, and now is a good time to ask for a raise or seek a new, higher paying position. If you’ve been seeking business funding through a bank or loan, you may receive good news and enjoy much success.

The Six of Pentacles card can represent a time of happiness, generosity, and balance in your love life. If you are in a committed relationship, you may need to allow your partner to give your material or spiritual gifts. You may need to make sure that you are being generous with your partner as well. If you are looking for love, you may soon meet someone kind, generous, and positive through someone you know.

The Six of Pentacles card may indicate financial generosity that will improve your financial situation. The money coming your way is likely a reward for your hard work, and you will likely feel like sharing your abundance.

The Six of Pentacles card may indicate an importance in sharing your spiritual understanding with others in your life. Even if you do not realize it, you likely have important insights to share. Now is also a good time to remain open to learning more from others spiritually as well. Through this balance of giving and receiving spiritually, you will gain immeasurable depth in your life.

Previous Card: The Five of Pentacles

Next card: The Seven of Pentacles