Minor Arcana - The Nine of Wands

In the Nine of Wands, we see the somewhat battered and bruised warrior, looking agitated and paranoid, yet still defending his domain. The bandage on his head is reminiscent of the Magician’s headband, symbolizing one whose personal vision, determination and will have steered him into injury, perhaps because he was too insistent upon having his (and only his) way.

This card represents on the one hand some one who has been through an endlessly difficult ordeal, but who still retains courage and determination even in spite of personal sacrifice. Alternatively, it may indicate some one who is creating a pattern of endless conflict for himself on account of his own attitude. One of the downfalls of the Wands suit is its love of battle for battle’s sake; the fire suit does not so much enjoy the spoils of victory as he does the simple act of fighting to win them. But the trouble with aggression is that it creates more aggression; fighting against some one or something always causes a counter-attack of one kind of another. We can see from the battered warrior’s face, as he uneasily looks over his shoulder as though expecting some one else to suddenly appear and attack him, that he is worn out and in a state of perpetual agitation. Because of how aggressively he has been fighting, and because he has gone this long without backing down, now he must remain permanently on the defensive.

Figuratively, this card stands for the overextension of the spiritual attributes of Fire. There is no water or earth in this image, representing a lack of emotional sensitivity and practicality, respectively. The great heights of the mountains behind signify Air, which in this case symbolizes planning and abstract thinking. Thus, we have an impassioned, daring strategist, who possesses an abundance of inspired vision and mental clarity, yet who lacks the ability to relate to others with anything but aggression, along with the ability to be practical or realistic. This is a recipe for injury, to be sure. We cannot stubbornly crusade against any and all opposition, trying to force our dreams down other people’s throats through sheer brute force.

At some point, visions and dreams must be refined, adjusted and adapted to practical logistics and the ordinary limitations of reality. In the same way, rather than perceiving any opposition or contradiction as a call to out-and-out warfare, one must be able to relate sensitively and communicate effectively with other people. Anyone who has ever tried to make something happen on dreams alone knows how brutally the mundane world can batter you into humility and submission; even if your spirit and determination to succeed are not altogether broken, if you choose to remain fighting (and it may, indeed, not even be a choice by this point) you are left in the same ill-at-ease state pictured on Nine of Wands, secure for now but with the constantly looming threat of imminent warfare.

The Nine of Wands card is connected to Saturn / Venus as protectors and patrons.

The Nine of Wands card can represent strength, courage, resilience, and endurance in your life. Even if things do not seem to be working in your favor, you will likely achieve something great if you refuse to surrender. You may learn something new and invaluable about yourself through a rapid learning curve in some aspect of your life.

When the Nine of Wands card is reversed, it may mean that weakness or stubbornness are overpowering strength and willpower I your life. You may be feeling confused or unmotivated when it comes to saving something, or find that the obstacles you’re facing might seem too large to overcome. 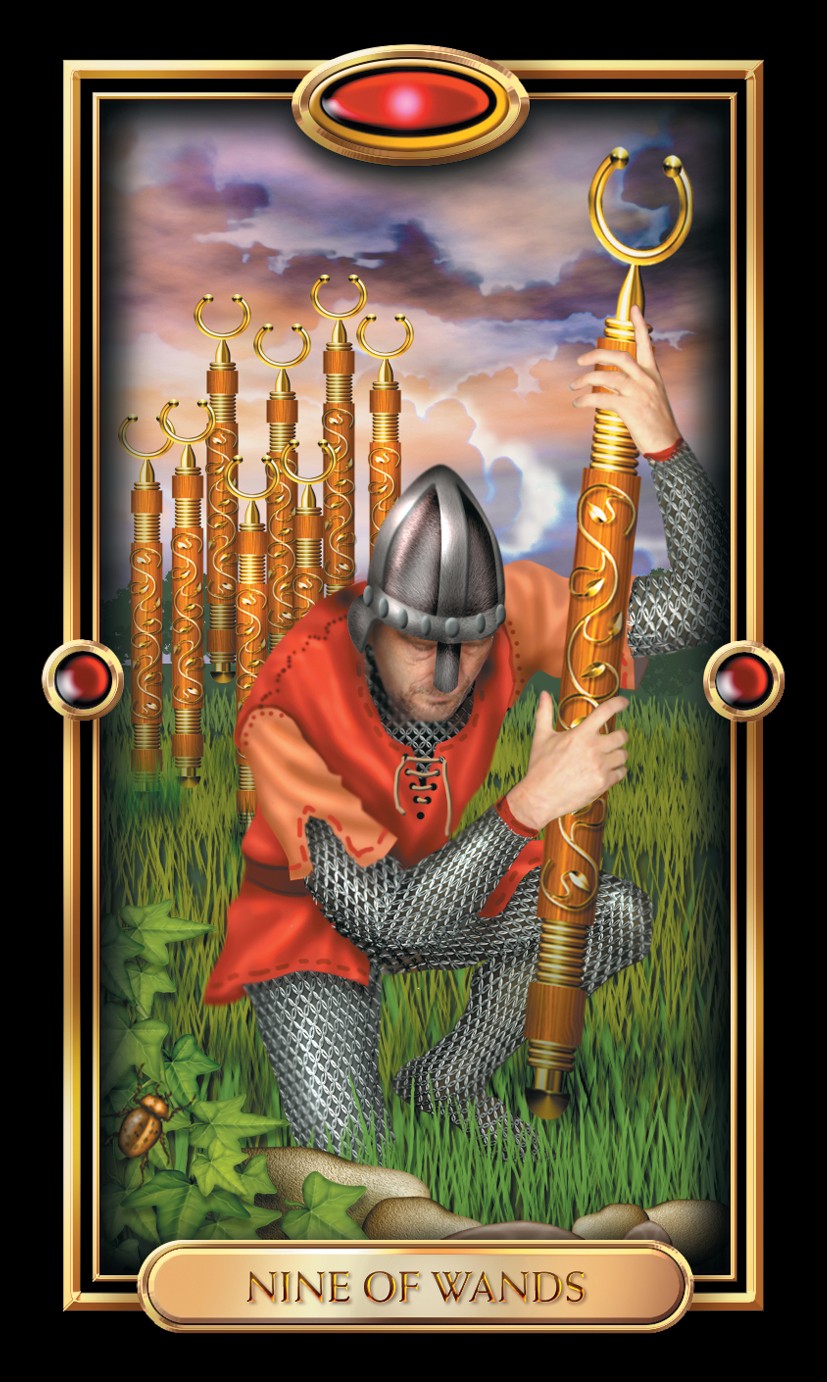 The Nine of Wands card may mean that things are tense in your work life. To clear the confusion, you may need to remain calm and composed on the surface and continue to focus on doing your best. You may also need to prepare for the possibility that your job will soon be eliminated and make sure you have a plan in place should this happen to you.

The Nine of Wands card may mean that you need to refrain from constantly dissecting a romantic relationship, and give your partner some room to be and breathe. Even if you are single and longing for love, now may not be the right time for you to enter a new relationship. Instead, you may benefit more from thinking about how to heal any emotional wounds you might have so that you are more whole and ready for love in the future.

The Nine of Wands card can indicate that you will need to approach your finances in a calm and methodical manner to determine your best course of action. Now is a good time to consider ways you can increase your income, and begin taking small steps to accomplish your goals.

The Nine of Wands card may mean that you need discipline to help you meet your spiritual goals. By focusing, planning, and calling yourself to higher levels of spiritual study and commitment, you may find the strength you need to expand and grow spiritually.

Previous Card: The Eight of Wands

Next card: The Ten of Wands