Minor Arcana - The Nine of Swords

The Nine of Swords is an image of inner torment, worry, grief, despair or remorse. It is an image of the dark night of the soul. Everyone goes through this archetypal experience at some point in life: wide awake at 3am, rightfully or wrongfully convinced that the worst of the worst has happened and all is ruined, or perhaps gripped by bottomless, unshakeable, all-consuming grief. The picture carved on the mourner’s bed beneath the pillow where her head rests symbolizes the deeper unconscious or archetypal roots of her emotions; indeed, at this hour our feelings are often of mythological proportion. The card may literally represent being awoken by nightmares, a psychological disorder, or other kinds of eruptions from the unconscious.

The abundance of Swords suggests either the non-stop, swirling, tireless neurotic thought patterns which plague us in the night, repeating over and over on an endless, pointless loop, or else the weightiness of sorrow, shame, guilt, grief or loss upon our minds and hearts. Perhaps life has dealt a harsh lesson, for the Swords symbolically represent both the intellect and pain, and sometimes the two converge. Often we learn life’s deepest and most profound lessons the hard way, whether through error, emotional suffering or plain bad luck.

On the other hand, our human minds have a way of blowing things way out of proportion, and this card may represent an excessively dramatic or apocalyptic attitude. Very often the most excruciating part of a period of stress or pain is the time before the actual occurrence of the unwanted event. We anticipate this event in abject terror and despair, feeling that we will never recover from such an event. Yet usually once we’ve actually gone through it and made it to the other side, it is not nearly as bad as we’d imagined. Sometimes it is, of course, but if we pay attention and keep a clear and open mind, we may be able to penetrate to the deeper meaning of these events in our lives, and learn what we are now meant to learn. Many times and experience which is difficult and painful leads to wisdom that could not have been acquired otherwise, or to greater satisfaction in the long run.

The philosopher Friedrich Nietzche said: “Pain is the best mnemonic”. In the Nine of Swords we see this clearly. We are not likely to forget the lessons we have paid in blood to learn, yet we also know that often our greatest powers and deepest wisdom is acquired, not from joyful, peaceful, easy times, but through struggle, hardship and pain.

The Nine of Swords is connected to Saturn / the Moon as a symbol of concern, depression and guilt.

The Nine of Swords card can represent worry, anxiety, sleeplessness, or overwhelm caused by guilt or regrets in your life. You may find that you are frequently experiencing sleepless nights, arguments, and nightmares.

When the Nine of Swords is reversed, it may indicate that you have issues or problems that have been ignored and that you may not know exactly how to handle when the resurface in your life. You may not have the insight or strength to face these problems, and might be tempted to hide away and focus on the past without being able to let go and move forward. 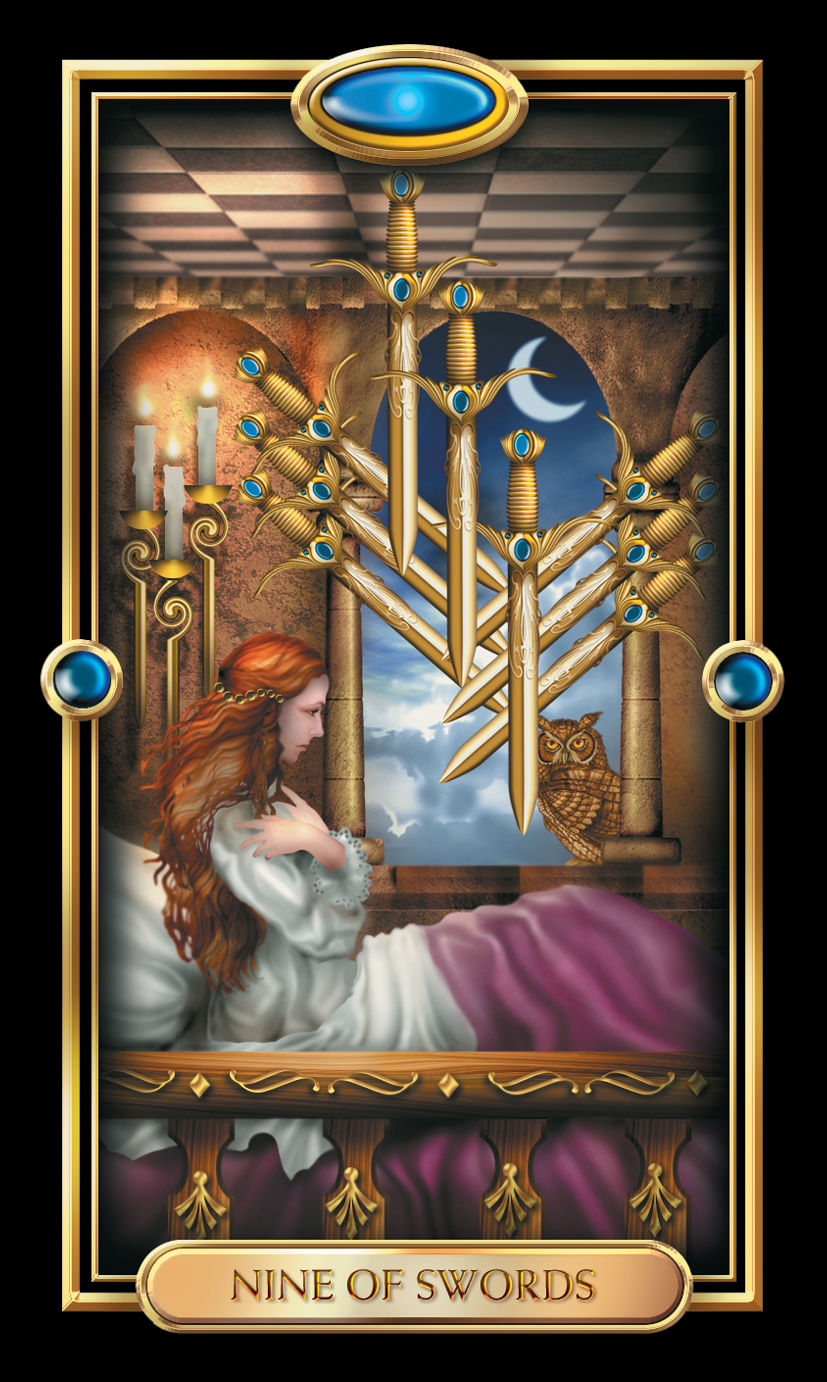 The Nine of Swords card can indicate that you need to release any worries or anxiety you have been experiencing in your work life. You may need to focus on what you can control as a way to overcome anxiety. Thinking positively and asking for help in a new job search may lead you to perfect career opportunities.

The Nine of Swords card can mean that you may be fretting or troubling over something in your romantic life. You may need to trust your instincts, and know that if something in your relationship seems unhealthy to you, then it most likely is. You may need to have an honest conversation with your lover or partner during this time. If you have recently met a new romantic interest, you may want to take your time and see what develops slowly.

The Nine of Swords can represent a need for critical analysis in your financial life. If you feel like you cannot feasibly keep up with your financial obligations, then now is a good time to take a thorough look at your finances and ask for help if you need it. Now is not a good time for gambling of get rich quick schemes.

The Nine of Swords card can indicate that you need to slow down your brain and reduce your stress levels. Mediation may help you find more balance and peace in your life, and relieve your stress. If you do not know how to begin on your own, you may be interested in books or classes that can help you learn to silence the chatter in your mind.

Previous Card: The Eight of Swords

Next card: The Ten of Swords