Minor Arcana - The King of Wands

The King of Wands represents the pinnacle of success with regard to expansion, conquest, sexual potency and determination. The King of Wands is the natural born leader of all natural born leaders, the King of Kings. The card may represent a person who has attained a great deal of material success or influence through creative works, travel, military service or philosophical/spiritual works. The King of Wands is tremendously confident in himself; he is thoroughly convinced of the rightness of his convictions, and he may have good reason for this, for the King of Wands is by nature honest, encouraging and idealistic, and he has probably secured himself great success and respect from others through sheer faith in his own intuition and willful determination.

On the other hand, the King also represents a calcification of beliefs— that is, one who has stopped expanding and questioning himself because of a pattern of being right or successful for so long. He may be somewhat pigheaded about his beliefs, impatient or intolerant of anyone who does not immediately see the absolute brilliance of his plans or beliefs. The King of Wands also has a melancholic overtone, because the suit of Wands generally hates to be tied down by responsibility or obligation, preferring instead to adventure and explore with total freedom; yet if we truly wish to accomplish anything, this will always involve some measure of self-discipline, limitation and dutiful fulfillment of mundane tasks.

The King of Wands thus represents one who has on the one hand the dignity, pride, respect and material success of one who has accomplished many great deeds and works because of his daring ideas and exuberant faith in  himself and life at large, yet on the other hand is now constrained by the limitations that those accomplishments have put on his life.

In a reading the King of Wands may be advising you to be a leader or authority figure to others, projecting confidence, determination, optimism and bravery. It may indicate a person who possesses these qualities along with a strong sense of social responsibility to his larger group or organization.

The King of Wands card is connected to the Sun in Leo as the image of independence and self-confidence.

The King of Wands card can represent marriage or family in your life. You are likely a natural and charismatic leader involved in exciting entrepreneurial projects. You may be quite passionate about life, but struggle with compromise in your life as well.

When the King of Wands card is reversed, it can represent someone in your life who is controlling, violent, or ill-tempered. This person may also be living a double life where they are charming to the world, but struggling with temper or control issues at home. The King of Wands can also represent red tape, fear of taking risks, or poor leadership in your life. 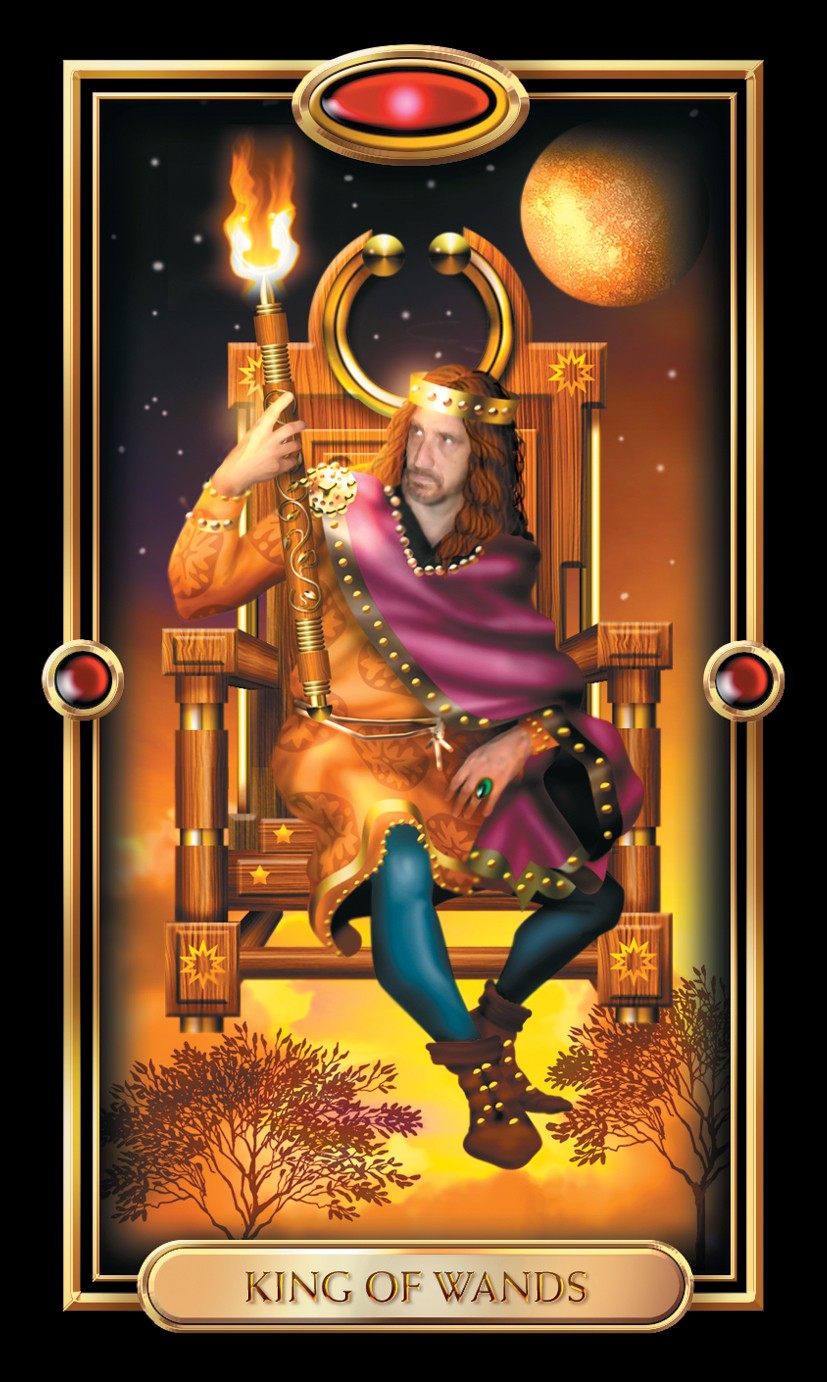 The King of Wands card can mean that a man with light hair, who you can trust and depend on, will soon serve as a mentor to you at work. He might be somewhat rough around the edges, but you will likely learn a lot if you pay attention to the way he approaches work. If you are looking for employment, you may soon receive a pleasing job offer.

The King of Wands card can represent good things to come in your love life. Someone you care about may share your loving, protective feelings and be willing to work hard to make a relationship work. You may find you are more focused on your career, but will likely benefit by making time for romance in your life.

The King of Wands card may indicate that you will discover a new talent that will lead to more money for you in your career. Now is a good time to be bold and dream big. You may want to start your own business or start taking steps in that direction if it is something you have been considering.

The King of Wands card may represent that you are already on your way toward spiritual exploration and enlightenment. You may have a slight tendency to get carried away, so approaching spirituality as a process may help you stay more balanced. Meditation will likely be very beneficial to you right now, even if you just stay still and quiet to reflect in small portions of time in the beginning.

Previous Card: The Queen of Wands

Next card: The Ace of Pentacles