Minor Arcana - The Five of Wands

The Five of Wands indicates conflict, clashing, or the intersection of many different kinds of energy. It is ambiguous whether this conflict is good-natured, as with a bunch of boys play-fighting, or whether it is hostile, as with a gang of boys beating each other up. At any rate, the energies which are intersecting here are not harmonizing with one another, but instead creating an energetic mess.

This can indicate many opposing points of view in a project which lead to stagnation, disintegration or sloppy work, or it can symbolize people who are speaking at cross-purposes, that is, neither listening to one another nor effectively expressing themselves. It can also represent conflict within one’s own psyche, such as having many different aims, goals, feelings or desires, or not being clear about which direction you want to move in.

When the Wands energy is not harmoniously unified and well-directed toward a specific, common aim, the energy becomes scattered and diffuse, leading either to the whole enterprise simply falling apart, or to open, aggressive conflict. One can become pig-headed, insisting upon the rightness of his own position and the wrongness of everyone else’s; whether he is openly combative or not, this arrogant self-importance (which is one of the negative attributes characteristic to the entire Wands suit) becomes a weapon in itself which maintains a barrier between an individual and people who might otherwise be able to help him.

We must be able to blend and adjust our own ideas and visions according to the input of others in order to accomplish our aims; if we only seek to defend our own opinion and not listen to anyone else, then all the fantastic power of the Wands suit gets stuck in a quagmire and never materializes into anything. We will waste all the precious energy that is ours to create with on useless fighting, petty bickering and pointless power-ploys.

The Five of Wands is connected to Mars in the 5th house as, a symbol of sporting events or games.

The Five of Wands card can indicate that you may need to stand up for something important to you, even if it brings opposition or arguments. You may experience personality clashes with others or find that you become more easily annoyed than usual.

When the Five of Wands is reversed, it can represent a loss of individuality in your life as you struggle to stand out among others with equal talents. You may have lost faith in your ability to win or succeed, and have likely given up on trying. Your fear of success may cause you to be defensive due to believing others are attacking you by offering their point of view. 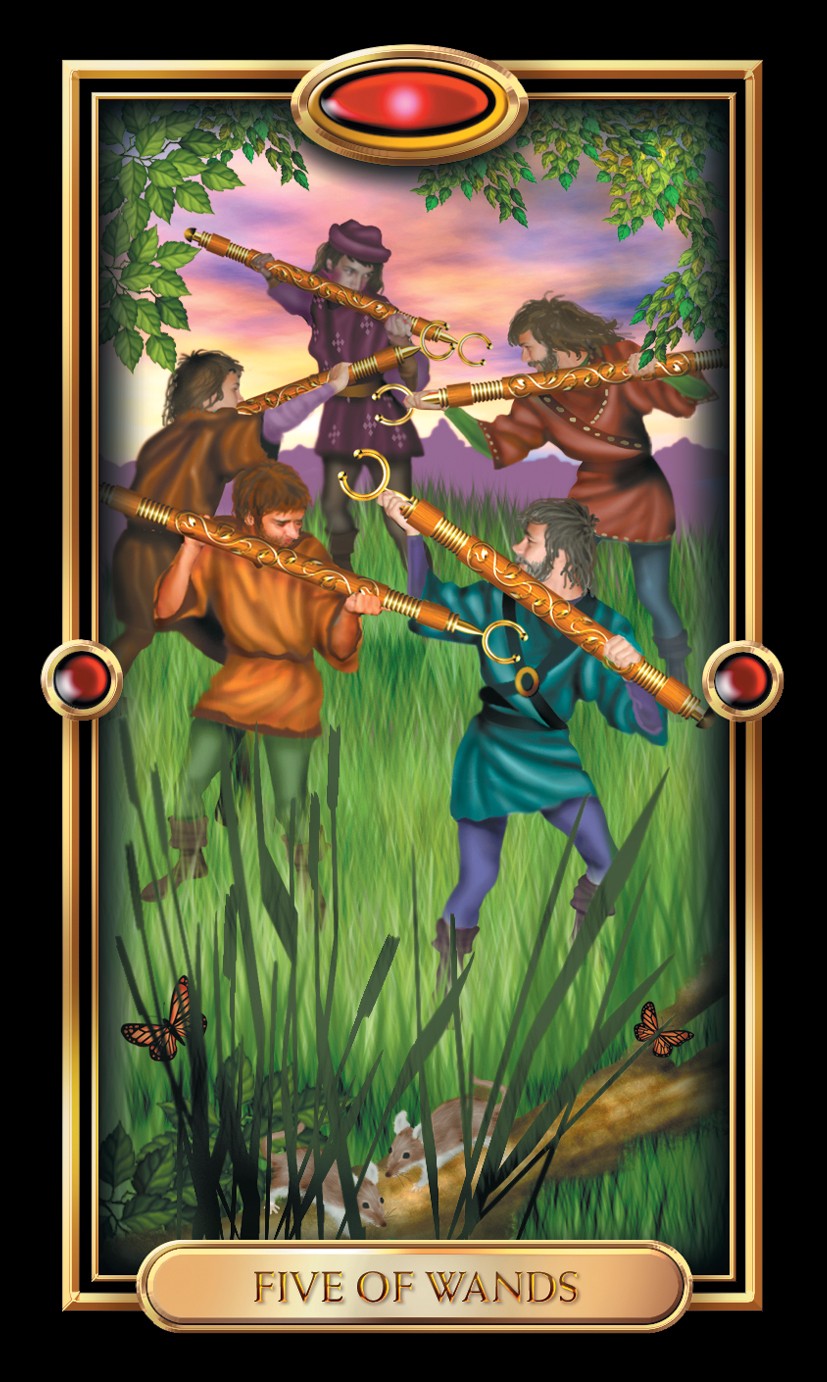 The Five of Wands card can indicate that you may experience some competition at work, and may be very successful if you play your cards right. To win in the long-term, you may need to make sure you are fair even if others around you are not.

The Five of Wands card can mean that the person you are interested in romantically may also be pursued by others. You may need to know that you have done everything you can by giving it your best shot to develop a meaningful relationship. You may also find that you are the one being pursued by several people who have romantic interest in you as well.

The Five of Wands card can indicate that your finances might be tight at the moment and you will need to approach your financial situation with calmness and logic. While you may not be able to meet all of your obligations right away, your situation is likely to improve quite soon.

The Five of Wands card can represent a time of rest, peace, and quiet in your spiritual life. You may be feeling stressed, busy, and overwhelmed, and will likely benefit greatly from some time to yourself to relax and do nothing and just be. You will likely see and feel spiritual growth in your life as a result of calm and rest.

Previous Card: The Four of Wands

Next card: The Six of Wands