Minor Arcana - The Five of Swords

The meaning of the Five of Swords in a reading is largely contingent upon which figure in the card you identify with. If, in your given situation, you are in the role of the figure in the foreground, then the card symbolizes a victory of some kind, but probably one which is not particularly enjoyable or praiseworthy, or one which is only a superficial success but on some other level a kind of defeat. You may have attained a promotion, material reward or recognition by sheer brute force, or by manipulation or intimidation tactics. You may have seized power and glory for yourself at the expense of relationships, or your good fortune may be some one else’s misfortune. This card often indicates a bloodthirsty attitude of wanting to win by any means necessary, no matter who or what is damaged in the process. The figure in the card is smiling as he collects the Swords of his opponents, but the color scheme of the card indicates that this is not a truly fulfilling or happy moment. The goal has been attained, yes, but at what cost? This card may in its most basic sense just show meanness or some one who is delighting in causing pain to other people. Perhaps a mean-spirited attitude it is a hidden motivation of your own, as you may or may not be aware.

On the other hand, you may identify with one of the figures in the background, who are suffering humiliation, defeat or simple misfortune at the hands of another. This may signify that you have been betrayed by a former friend or ally, or you may simply be the victim of some one else’s greed, indifference or outright malevolence. You may feel humiliated, embarrassed or ashamed, or deeply hurt by the harsh words of a loved one.

If it does not literally represent a situation of conflict or defeat, the card may indicate something about your perspective or outlook. You may have an inferiority complex, lack of self-esteem or a sense of inadequacy as compared to others. You may be thinking of yourself as less than others, or, if you are the victor, you may be adopting a condescending or self-important attitude, putting yourself above others. As Sun Tzu said, “every battle is won or lost before it is even fought”, and the outcome is largely contingent upon our own self-confidence, sense of purpose or righteousness, and our ability to speak up for ourselves.

The Five of Swords is connected to Mars in Scorpio, in its most “dark” form as an appetite for destruction and cruelty.

The Five of Swords card can represent defeat, betrayal, conflict, or unhealthy competition in your life. You may find that words others speak to you will be very hurtful and you may be lied to or have your weaknesses used against you.

When the Five of Swords card is reversed, it can represent conflict or arguments that may be dragging on or lingering unresolved in your life. You may realize that people are being nice to your face, and then speaking cruelly about you behind your back. The arguments and conflicts your experience may not be rooted in any reason other than discontent and cruelty, so you may need to be careful about who you spend time with. 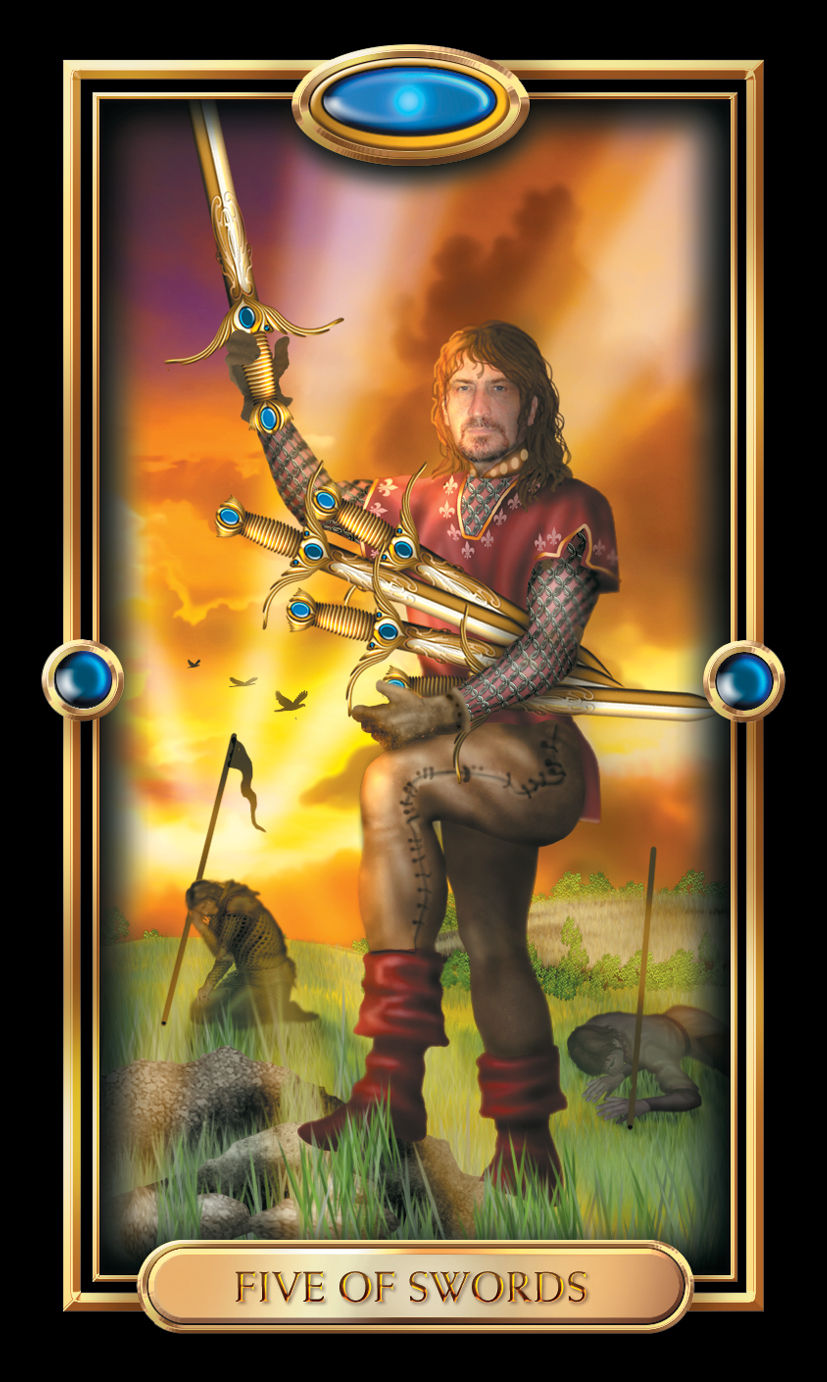 The Five of Swords card can indicate that you may be your own worst enemy at work. You may be expecting an entire system change simply because you believe things should function differently, but this might not be realistic. Some unfairness may exist at work, but keep your words impeccable and pay attention to how you speak and express yourself.

The Five of Swords card can represent conflict in your love life. Things may not work out as you’d hoped in an existing relationship. You may need to thinks calmly and carefully about what your deal-breakers are in relationships, and he honest with yourself first by accepting reality.

The Five of Swords card can indicate a need for caution and restraint in your financial life. You may need to draw inspiration from your ingenuity and consider ways to make more money by selling things or cutting expenses. You may need to ask for help financially, so don’t let your pride get in the way if you need assistance.

The Five of Swords card can represent time, space, and answers in your spiritual life. You may need to give yourself time to find new answers or break away from beliefs that no longer work for you. It may help you to remember that your beliefs are personal to you, and are not dependent on the feelings or beliefs of others in your life.

Previous Card: The Four of Swords

Next card: The Six of Swords