The Emperor signifies order, authority, structure, hierarchy and discipline. He is the archetype of the stern, severe Father figure who disciplines, orders, penalizes and limits. The Empress and Emperor form a pair of parents, and each is responsible for imparting certain kinds of knowledge. The Empress represents the Mother figure, and by extension nature itself; she teaches care, compassion, nurturing and nourishment. The Emperor represents the Father figure, and the organizing principles and rules of external society; he is responsible for teaching the inflexible codes of conduct that one must abide by in the collective, including law, reason and order.

The changing tides and shifting cycles of Nature are reigned in by the Emperor; he represents man’s attempt to rise above the chaos of nature by imposing society, law, order and convention, things which do not follow the cycles of the moon or change with the seasons, but which can be relied upon by any individual so long as he fulfills his duties in society and follows the rules himself.

The Emperor is also symbolic of these forces in your own mind: your powers of self-discipline, focus, organization, and practicality. In its more positive expression, this card can mean you stand to benefit from imposing more clearly defined structure, order or hierarchy in the sphere of your question. Everything has its proper place and time, and it is the Emperor’s own clarity of judgment and commitment to following certain codes to that ensures that this order is maintained.

The Emperor represents a well-organized, stable, honest and just system— as well as the figures who run it. In its more negative expression, this card can show tyranny, boredom, power or control issues, mindless obedience, or an overbearing authority figure. It can represent authority for authority’s sake, abusive rules or laws which aim to maintain the status quo even if the status quo is dysfunctional, or following the rules or convention without thinking for himself. Within the psyche of the individual, the Emperor may also represent the repressive tendencies of the conscious mind, which seek to ignore, devalue or hide from more spontaneous emotional impulses, for the sake of preserving order and keeping everything “manageable”.

The Emperor card is connected with the planet Mars, which is ruled by Aries.

The upright Emperor card represents powerful, masculine energy, and can signify a ruler, head of household, or a leader in a company or community. This card means you are an authority figure who creates a strong foundation that others can build upon. You are quite skilled at creating order from chaos and viewed as a leader by others. Now is a great time for you to make a fresh start in a venture, and leverage your self-control and discipline to find the best way forward. During this time, you should make commitments and be sure to honor each one.

When The Emperor card is reversed, it represents a lack of control or order in your life. The card can represent someone who is childish, inconsistent, or unpredictable. During this time, you may also feel like something is blocking the energy that powers your authority and notice that people in your life seem to be disrespecting or dishonoring you in some regard. 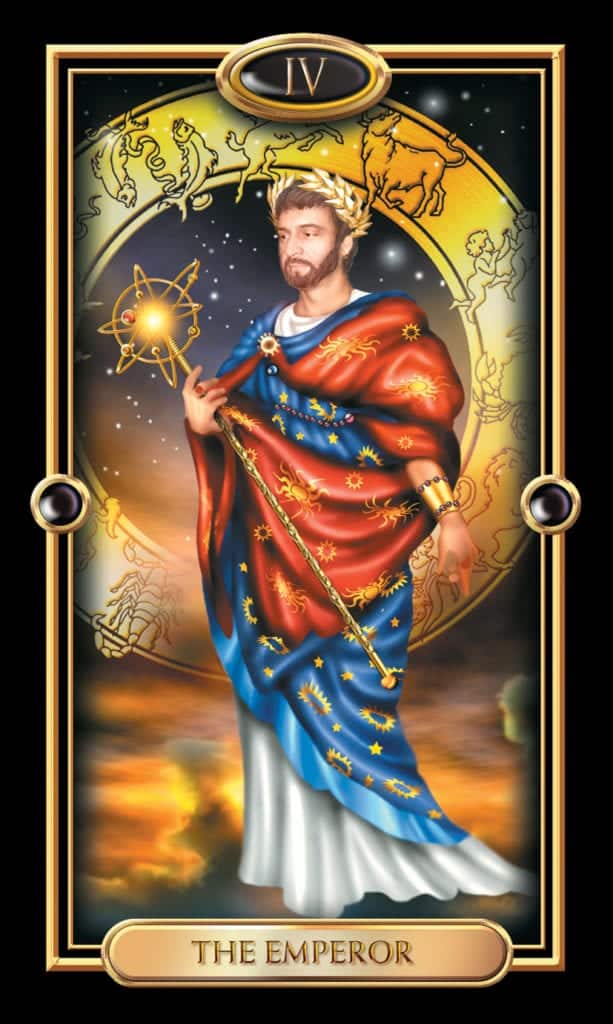 In the workplace, The Emperor card represents organization, follow-through, and logic. Work is probably going well for you as you focus on these attributes, and your stellar contributions will not go unnoticed. If you are looking for work, now is a great time to use logic as you ponder how others see you, and also use logical reasons to convince others to hire you. If you rely on logic in your search for employment, you will likely be successful in finding new work very soon.

Regarding love, The Emperor card signifies an attraction to order, logic, and organization. You may find yourself falling form someone who is older than you, who respects these qualities that you so strongly convey. While the attraction may not be mutual initially, patience and persistence will help it grow in the future.

The Emperor card represents a need for more discipline, logic to improve your financial situation. Attention leads to growth, so now is a good time to examine your finances and ensure that you are treating your money with respect. Try not to focus on where you are lacking financially, but instead dedicate attention to what you have and how you can make it grow.

The Emperor card signifies a time to honor your need for spiritual development and growth. Try not to focus as much on your left-brain driven traits of logic, reason, and order as you seek spiritual growth, and indulge in your more creative and artistic right-brain as you seek. Your great discipline, though, will make it easier for you to mediate on your spirituality if you make the time and effort.

Previous Card: The Empress
View All Cards
Next card: The Hierophant