A Brief History of Tarot 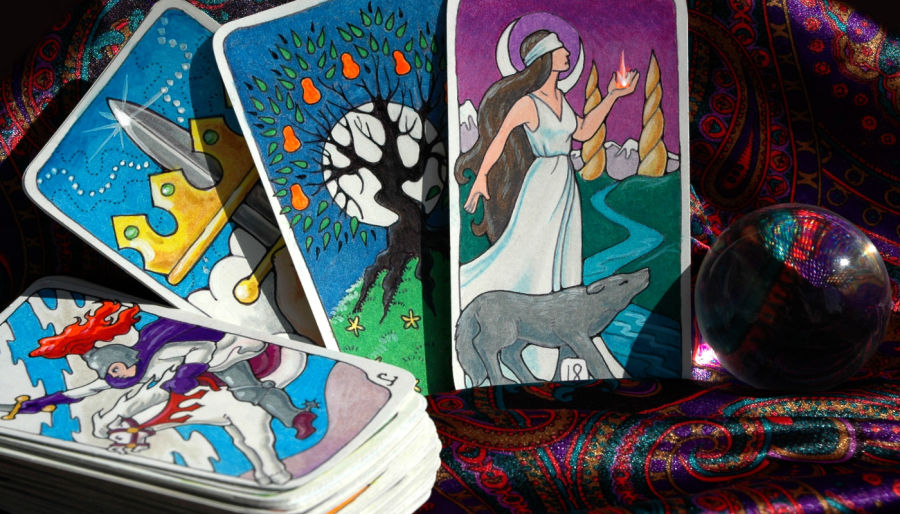 The heart-felt intention of this article is to give readers a light yet comprehensive lowdown on the four main periods in tarot history, plus a few bonus bits of info along the way.

First up is the hermit Duke Filippo Maria Visconti of Milan, who is generally thought of as the inventor of the first deck, created sometime in early 15th-century Italy (Farley, 2009). On investigating the Italian Renaissance the beginning of a spiritual interest in the mysterious symbolism of the early decks becomes clear, still used at that point for playing entertaining games at social gatherings or among friends.

By the time 18th-century France rolled around, the general presentation of tarot decks had changed considerably and became so different from their predecessors, that it was difficult to see any resemblance, besides that of the aces to tens, game-like playing cards, otherwise known as the minor arcana. The Church had everything to say about anything that was considered to be against their political, social, and spiritual mandates; which naturally led to an underground emergence of alternative and esoteric doctrines, the accumulative content of which, including the tarot, comprised the French Occult Revival. This was the second major shift for the growing interest in the tarot, and it was transformed from a Renaissance game into an esoteric exploration, created in Egypt and brought to France, holding the wonders of magical and ancient wisdom, already reaching Europe’s ears thanks to Napoleon, creepy little mystic that he was…

So here came the slow but eventual shift from an early pack of creatively decorative playing cards to a spiritual inspiration, pivotal to various esoteric orders of the time.

At this stage the tarot tree takes root into various forms of esoteric studies, including Hermeticism, astrology, and kabbalah. The primary teachers of these groups were Éliphas Lévi and Gérard Encausse, aka spooky magicians.

The Emergence of the Hermetic Order of the Golden Dawn

The next significant development in tarot happened in England, which was also part of the new spiritualism that had become popular by the 19th century for its influential interpretation and documentation of the principles of magic. The Hermetic Order of the Golden Dawn held tarot as one of its central tools for divination, and, even though the Order never had more than around 300 members (Farley 2009), the Golden Dawn was an extremely popular deck that changed the major arcana sequence and connected each card to the twenty-two paths among the sephiroth on the kabbalistic Tree of Life. These connections gave a clear, divinatory interpretation to each card and started the initial engine for what is seen in modern divinatory practices today.

In the 1930s, Two Golden Dawn members played a leading role in the evolution of tarot, Aleister Crowley and Arthur Edward Waite, the former being a far spookier magician than the latter! In good old Egyptian fashion, the scribe of the gods and the underworld won the Crowley lottery and the tarot world was introduced to the inimitable Thoth tarot deck, where Crowley continued the connection between the tarot’s major arcana and other esoteric modes of practice, namely the art of alchemy, kabbalah, Egyptology, and astrology.

But it was Waite who designed a pack of tarot cards in which the minor arcana or pip cards (pip: (n.) “spot on a playing card, etc.” c. 1600) worked alongside the main divinatory meanings for the trump cards, therefore adding a whole new dimension to the sequence of the cards and their supporting energies. He focused primarily on the ever-increasing and notable intervals of the elements. Commonly known as the Rider-Waite Tarot Deck, it is the single most popular deck in the history of tarot and has been redesigned many times over.

An article on the tarot would not be replete without mentioning gypsies and their fortune-telling prowess. How many Hallowe’ens has seen the full-on gypsy, or at least a romantic version of how they dressed, and that crystal ball is about as magnetic as the moon. Imagine bonfires and caravans and freaked-out townspeople coming to have their fortunes read by beautiful black-eyed sorceresses. In fact it’s not even necessary to leave this glory to any one culture, there have been and will be versions of diviners, worldwide forevermore. What a comforting thought! And with the birth of the New Age movement, there are plenty of examples around today, as the tarot deck and its studies undergo yet further transformation.

Even though it maintained its primary purpose as a divinatory tool, the basic nature of that divination shifted; and even though the deck held to its fortune-telling properties, the goal became healing and self-development, both central to the New Age movement. In addition, Western New Age truth-seekers were being inundated with Eastern indigenous religions, the leaders of which had sent representatives to the West, to bring the modern mind some ancient and clearly forgotten wisdom.

At that time, Jungian psychology and Joseph Campbell with his archetypal studies soon exploded on the scene, giving even more credence to the inner journey and how our psychic impulses could be represented by a simple picture on a card. Add the concepts of synchronicity and collective consciousness and find the demand for new subjective structures to an old deck, finding greater attraction in that expression than in the art of divination.

During the 40s, à la Golden Dawn, tarot was still mainly used by only those who had been initiated into its mysteries; seen as far too powerful to be used by anyone without the appropriate knowledge and skill. This is possibly true but—as with much of our diluted version of the old adage “know thyself”—surely any help is better than none…

Because of the changing function of the deck and the questions that surround where it all started, there is no definitive knowledge of the tarots origins, just what has been seen pop up over the years as the clear progression of an ancient divinatory technique.

The serious card collectors are welcome to pitch in their reviews, because they’re the ones that have encouraged creating new decks, so it’s really to them to give thanks for the advent of further art in the oracle cards that, though they have similar connections to the archetypes and symbolism, do not constitute the same gravitas as the tarot deck. Collectors of the earliest decks can tell us that their origins of playing cards in Europe come from those imported from Egypt (Farley 2009); the structure over the years has remained relatively the same.

The tarot card experience gave birth to other oracle cards, many of which also focus on but are certainly not limited to the universal archetypes. Other divine beings show up to aid in our life’s journey, and there’s plenty of interest in the kabbalah and the archangel cards, which are very special to study. Who doesn’t love an angel?

There are oracle cards serving up knowledge from all the major beliefs, including ancient traditions like shamanism, Taoism, and various Celtic practices, paganism among them. Although the presentation of the oracle cards is beyond the scope of this article, do comment if you’d like to see their history; it’s an equally loving approach to as above, so below; as within, so without.