When I first started to learn to read Tarot, I thought the 10-card Celtic Cross Tarot spread was THE spread to use. I mean, it was in every Tarot beginner book and all the professional Tarot readers were using it.

But every time I laid out the 10 cards and tried to make sense of them, I struggled. I was so confused by all of the cards laid out in front of me and it was hard enough interpreting one Tarot card as a Tarot beginner, let alone 10!

I eventually realized that I was in way over my head with the Celtic Cross and instead I started to read Tarot with just 3 cards instead of 10.

Oh boy, if only I had done that earlier!

With less cards to interpret, the worry and self-doubt faded away and my confidence and intuition grew exponentially. I began to see the story in the cards and everything just flowed perfectly.

Now, I want to save you a lot of wasted time and energy by introducing you to the very best 3-card Tarot spreads.

The Past – Present – Future Spread 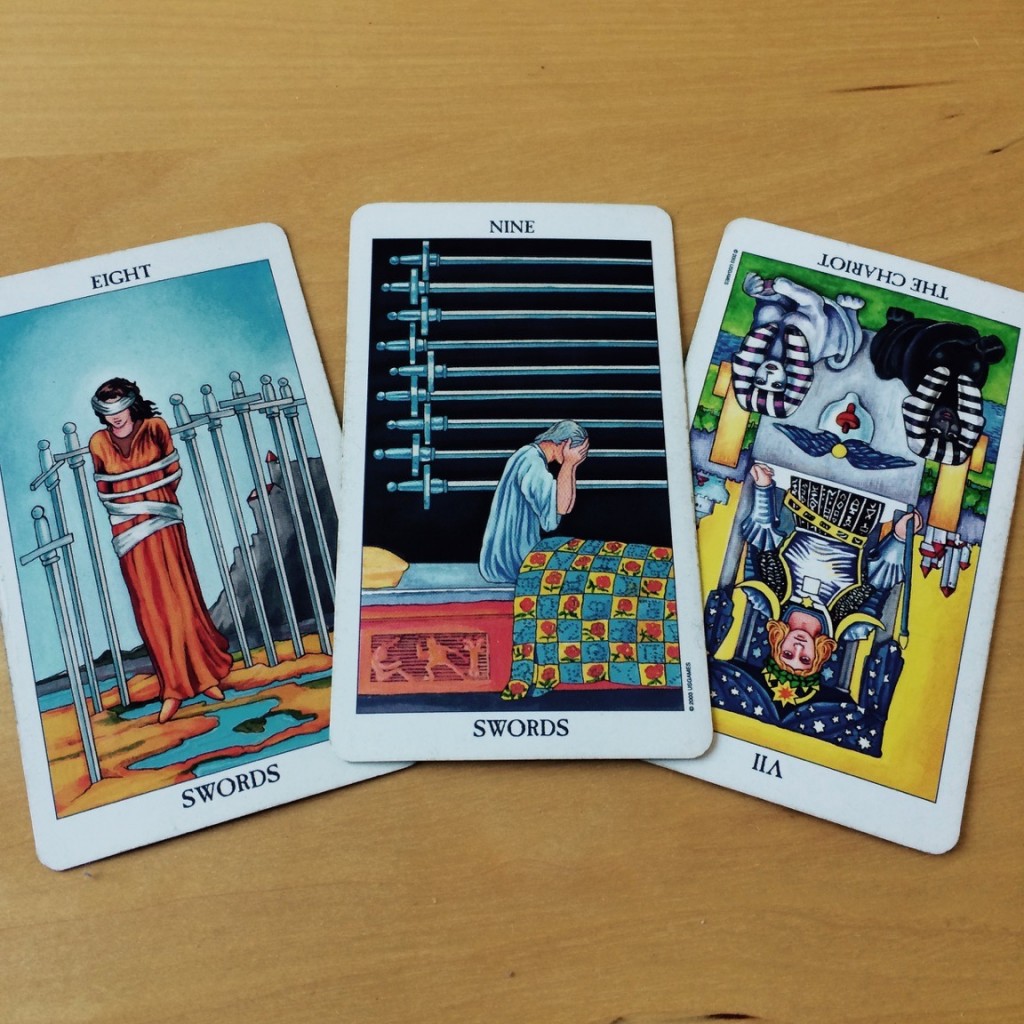 The Past – Present – Future Spread is probably one of the most popular 3-card Tarot spreads. It’s simple yet effective in understanding a situation – how it has evolved, where it stands currently and where it is headed.

The key to making this 3-card Tarot spread highly insightful is to look at the ‘flow‘ between the cards. That is, what has changed over the course of time?

Look for common symbols between the cards and see how those symbols change and evolve from past to present and present to future.

In the example on the right, you’ll notice the swords in both the Past and Present cards. They go from being stuck in the ground in the Eight of Swords, to moving horizontally. This might be a sign that what felt ‘stuck’ in the past is starting to move forward, even though it may cause some worry and anxiety in the process (Nine of Swords). 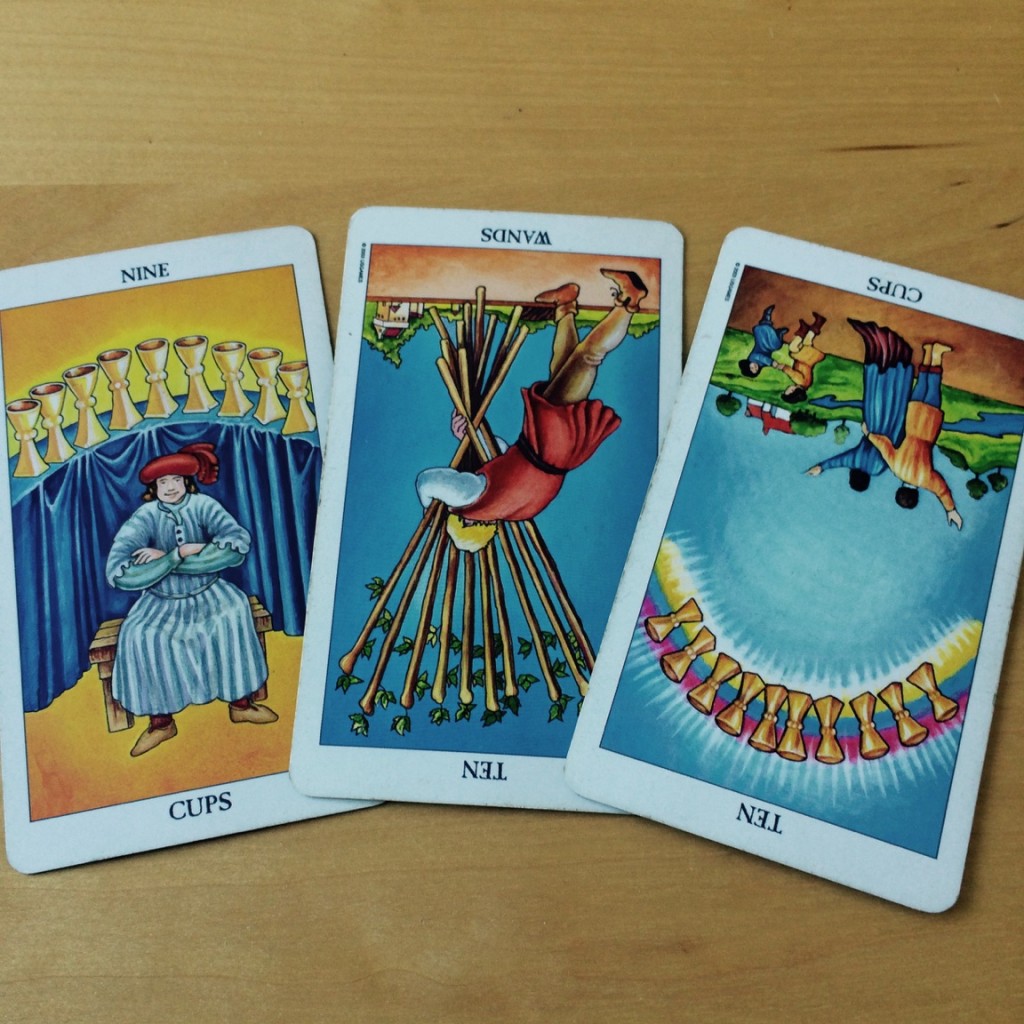 The Situation – Challenge – Action spread is helpful for when you are facing a particular problem or issue and you are ready and willing to create change. It’s not a “What will happen?” spread but rather “What can I do?” spread which encourages ownership and empowerment.

The Situation card tells you about what you’re dealing with right now. It can also give you an idea of what has lead you to where you are as you face the challenge ahead of you.

The Challenge card speaks to the underlying issue that stands in your way of achieving your goal.

Take a look at both the Situation and Challenge card. You might find it helpful to present it as “On the one hand… but on the other hand…”

In the example on the right, I asked the Tarot about my health and body image. The first two cards suggest on the one hand, I’ve adopted an “I can have anything I want” mindset (Nine of Cups), but on the other hand, I’m struggling to lose weight (of the heavy sticks in the Ten of Wands reversed). And that in itself is the challenge.

Finally, the Action card will pave the way forward and show you what exactly you need to do in order to overcome the challenge. With the Ten of Cups reversed, it’s about getting clear about my personal values and what I truly want, rather than simply satisfying an immediate need (hmmm, chocolate and wine!). 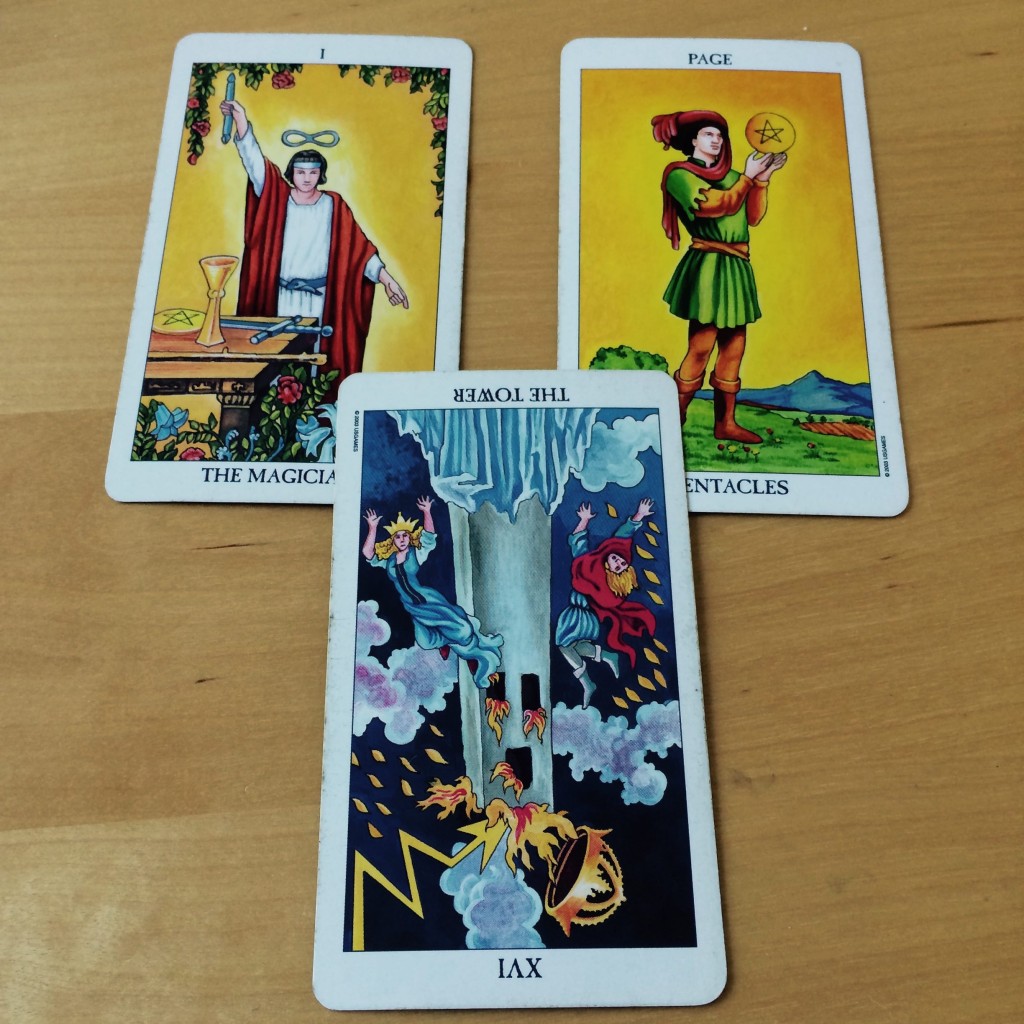 The most popular questions for the Tarot are often about love, so here’s a simple 3-card Tarot spread to give you the insight you need for your relationships.

“Me” relates to you (that is, the person asking the question) and “You” relates to the other person involved in the relationship. And “Us” is the sum of You and Me!

To make this a meaningful Tarot spread, look at the Me and You cards in relation to one another, rather than as separate entities. That is, how do the actual Tarot cards relate to each other?

In the example on the right, look at how the Magician (Me) relates to the Page of Pentacles (You). He stands facing forward, as if ready to deal with what is happening in the ‘here and now’. The Page, on the other hand, looks away from the Magician and towards the future. He seems preoccupied with new endeavours of a material kind. Interesting!

The Us card is what brings this all together. With the reversed Tower, there may be trouble bubbling underneath the surface in this relationship. Sure, both parties are carrying on their daily life in a positive manner, but this card is a tell-tale sign that not everything is as perfect as it may look on the surface!

I invite you to use one of these 3-card Tarot spreads for your next reading. Share your insights in the comments below! What did you discover?

Brigit is a professional Tarot reader & teacher, intuitive coach and spiritual entrepreneur. She is the founder of Biddy Tarot and inspires over two million people each year to transform their lives with the Tarot. A self-confessed Tarot lover, Brigit can’t help but spread the love to other Tarot enthusiasts. Sign up for her free email tutorial series - 5 Simple Steps to Read Tarot with Confidence.