Every reader has their favorite spread, and the word “favorite” simply implies the one spread that is most easily read, that is, there is an effortless rhythm to the funneling of information from spirit to reader to querent.

Starting off with a heavy hitter—may as well!—the Tetraktys (Greek (n.), lit. the number four) spread comprises a triangular figure consisting of ten points arranged in four rows: one, two, three, and four points in each row, which is the geometrical representation of the fourth triangular number. As a mystical symbol, it was very important to the secret worship of Pythagoreanism. There were four seasons, and the number was also associated with planetary motions and music.

A favorite among those leaning in to the Pythagorean tarot and kabbalah, the tetraktys spread provides a representation for checking the forecast of future events by signifying and adhering to various occult disciplines such as alchemy. Below is one example of how a Tetraktys spread could manifest for interpretation: 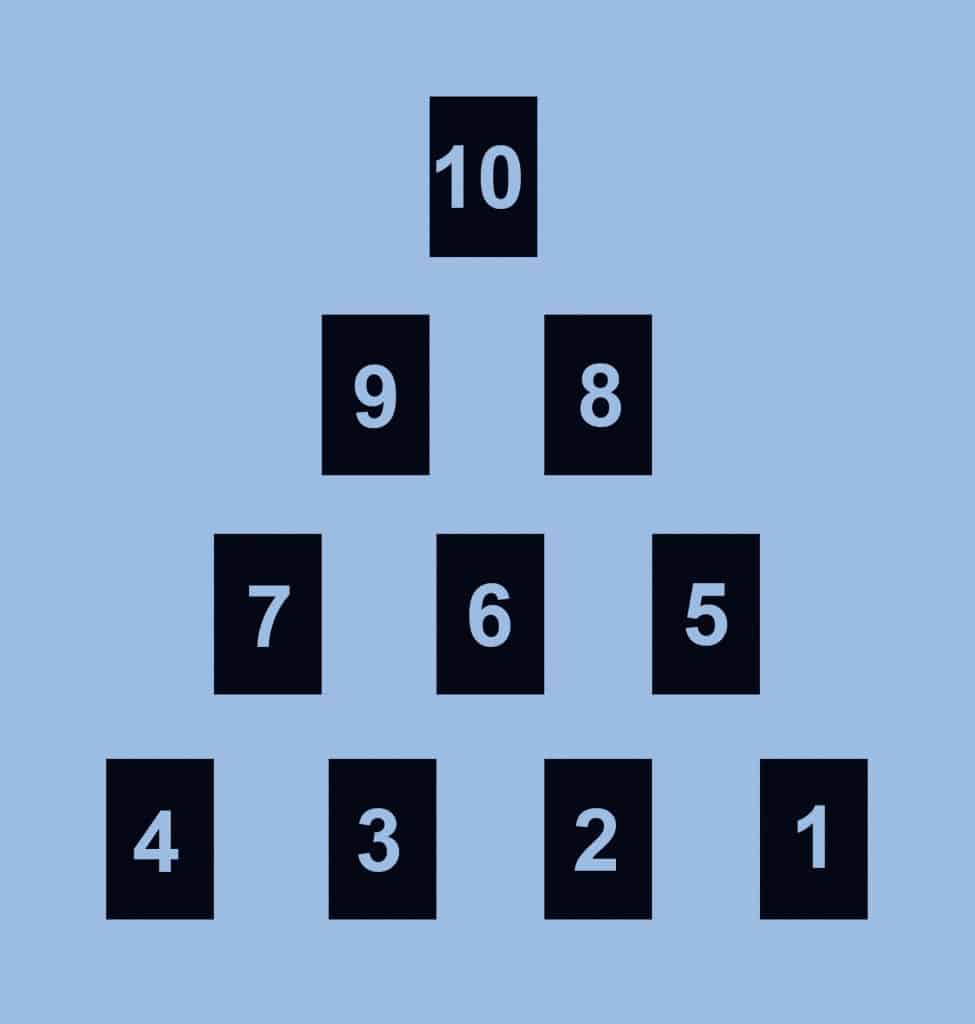 The first row from the top shows a single card position and represents the overall premise of the reading, creating the foundation for understanding all the other cards.

The second row of two card positions represents the cosmos and the individual and their relationship with one another, that is, how are you grooving with the above in your below?

The third row of three card positions represents three kinds of decisions an individual must make.

A recommended course of study to include with the regular use of the Tetraktys spread is the exploration of the natural elements and how they are balanced in the body. While reading with this spread is it apparent which element is dominant and which others follow in level of importance. By keeping an eye on one’s own elemental balance during the reading, greater knowledge can be gained. This allows the element to freely communicate its message to the reader and a subsequent delivery of that message (with an appropriate strength of the needed element) transmitted to the querent. In other words, the energy of any given element can find its way to balancing itself in the querent, provided that the reader is balanced themselves. And so we see how a spread can be an active conduit for healing from spirit to reader to querent, and then to all others with whom we interact after the reading. What a gift from mathematics! A lot better than high-school algebra, that is for sure… 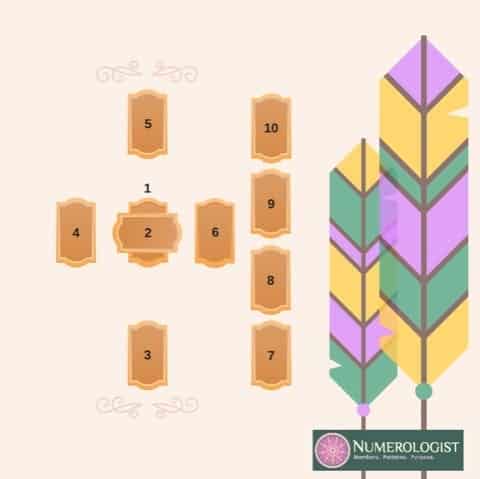 PinNext up we have the ever-giving Celtic Cross. This may be the number one spread used by tarot readers worldwide, and if not, it certainly is one of the first spreads any tarot student approaches. Why? Because it gives outstanding coverage of everything going on in a querent’s life and tells a story from cards one to ten, but it doesn’t stop there. The spread is like a combination lock that if you manage to work the first left-hand side from cards one to six, then the right-hand column from cards four to seven can alter their outcome in a way that is perhaps more satisfactory to the querent.

About the Celtic Cross

This spread appears to have arisen as a modification of spreads in the form of a cross used in Continental Europe.

Possibly the first published reference to this spread was in 1910 in the book The Pictorial Key to the Tarot by A.E. Waite. (See Part III, Section 7 of that book: An Ancient Celtic Method of Divination.)

There are various versions of the Celtic Cross, yet each follow the pattern shown below, whether or not they also include additional cards or are set in the order presented. That is to say, it is up to the reader how they feel best using the spread, and not necessarily the logical conclusion of how a priest(ess) would cross another individual according to the Christian religious symbol of a cross. One would see in that case the drawing of the first two cards then: above, below, left and right: cards 3, 4, 5, and 6 respectively. The order presented here is for reference rather than an indication as to ordered pattern.

From a quiet place in cyberspace devoted to religious tolerance and scholarship, Sacred Texts, Open Source for the Human Soul:

This mode of divination is the most suitable for obtaining an answer to a definite question. The [reader] first selects a card to represent the person or, matter about which inquiry is made. This card is called the Significator. Should he wish to ascertain something in connection with himself he takes the one which corresponds to his personal description. A Knight should be chosen as the Significator if the subject of inquiry is a man of forty years old and upward; a King should be chosen for any male who is under that age a Queen for a woman who is over forty years and a Page for any female of less age.

The four Court Cards in Wands represent very fair people, with yellow or auburn hair, fair complexion and blue eyes. The Court Cards in Cups signify people with light brown or dull fair hair and grey or blue eyes. Those in Swords stand for people having hazel or grey eyes, dark brown hair and dull complexion. Lastly, the Court Cards in Pentacles are referred to persons with very dark brown or black hair, dark eyes and sallow or swarthy complexions. These allocations are subject, however, to the following reserve, which will prevent them being taken too conventionally. You can be guided on occasion by the known temperament of a person; one who is exceedingly dark may be very energetic, and would be better represented by a Sword card than a Pentacle. On the other hand, a very fair subject who is indolent and lethargic should be referred to Cups rather than to Wands.

If it is more convenient for the purpose of a divination to take as the Significator the matter about which inquiry is to be made, that Trump or small card should be selected which has a meaning corresponding to the matter. Let it be supposed that the question is: Will a lawsuit be necessary? In this case, take the Trump No. 11, or justice, as the Significator. This has reference to legal affairs. But if the question is: Shall I be successful in my lawsuit? one of the Court Cards must be chosen as the Significator. Subsequently, consecutive divinations may be performed to ascertain the course of the process itself and its result to each of the parties concerned.

Having selected the Significator, place it on the table, face upwards. Then shuffle and cut the rest of the pack three times, keeping the faces of the cards downwards.

Turn up the top or FIRST CARD of the pack; cover the Significator with it, and say: This covers him. This card gives the influence which is affecting the person or matter of inquiry generally, the atmosphere of it in which the other currents work.

Turn up the SECOND CARD and lay it across the FIRST, saying: This crosses him. It shews the nature of the obstacles in the matter. If it is a favourable card, the opposing forces will not be serious, or it may indicate that something good in itself will not be productive of good in the particular connexion.

Turn up the THIRD CARD; place it above the Significator, and say: This crowns him. It represents (a) the Querent’s aim or ideal in the matter; (b) the best that can be achieved under the circumstances, but that which has not yet been made actual.

Turn up the FOURTH CARD; place it below the Significator, and say: This is beneath him. It shews the foundation or basis of the matter, that which has already passed into actuality and which the Significator has made his own.

Turn up the FIFTH CARD; place it on the side of the Significator from which he is looking, and say: This is behind him. It gives the influence that is just passed, or is now passing away.

N.B.–If the Significator is a Trump or any small card that cannot be said to face either way, the [reader] must decide before beginning the operation which side he will take it as facing.

Turn up the SIXTH CARD; place it on the side that the Significator is facing, and say: This is before him. It shews the influence that is coming into action and will operate in the near future.

The cards are now disposed in the form of a cross, the Significator–covered by the First Card–being in the centre.

The next four cards are turned up in succession and placed one above the other in a line, on the right hand side of the cross.

The first of these, or the SEVENTH CARD of the operation, signifies himself–that is, the Significator–whether person or thing-and shews its position or attitude in the circumstances.

The EIGHTH CARD signifies his house, which is his environment and the tendencies at work therein which have an effect on the matter–for instance, his position in life, the influence of immediate friends, and so forth.

The NINTH CARD gives his hopes or fears in the matter.

The TENTH is what will come, the final result, the culmination which is brought about by the influences shewn by the other cards that have been turned up in the divination.

It is on this card that the [reader] should especially concentrate his intuitive faculties and his memory in respect of the official divinatory meanings attached thereto. It should embody whatsoever you may have divined from the other cards on the table, including the Significator itself and concerning him or it, not excepting such lights upon higher significance as might fall like sparks from heaven if the card which serves for the oracle, the card for reading, should happen to be a Trump Major (Waite, 1911).

Positional Meanings at a Glance

Card Eight: Outside Environment, Another’s Point of View, Another’s Expectations, You as Others See You 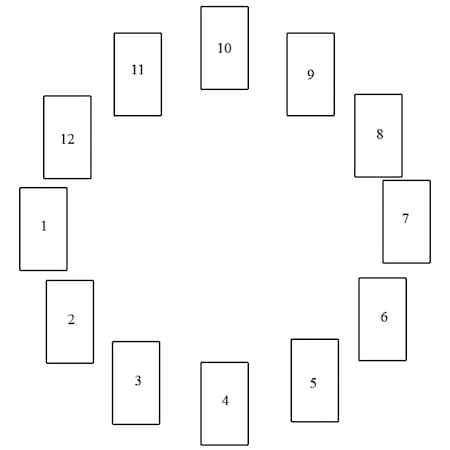 PinFor all the astrologers in the crowd, this next spread is perhaps best for the mind that gravitates towards the planetary transits and the archetypal symbolism in the houses of the zodiac, the planets themselves, and the Sabian Symbols.

This spread is especially helpful when a particular focus seen in the natal birth chart needs addressing. There are some hardcore transits going on right now (and wouldn’t you know that reading this is part of the whole shebang? Woot!). Two words sum up tarot, from spirit to reader to querent: Divine Timing. Let love rule, people…

About the Astrological Spread

Here is a schematic diagram of the horoscope spread:

Each card symbolizes matters specific to the house in which it lies. The following list briefly describes the matters each house signifies:

Positional Meanings at a Glance

Card One: Your identity, personality, disposition

Card Six: Your work and health

Card Seven: Your marriage or any other partnerships

Card Eight: Support from others, regeneration

Card One: Ares – your leadership role

What a perfect position above to end an article!—your intuition.

Oh, and no one can forget Love, nuh-uh.

What are your best-loved tarot card spreads, readers? Just jot them down in the comments, and glorious readings all around…