Have you ever wondered what the real purpose is for the crop circle phenomena?

Over the years, we have witnessed crop circles becoming more and more elaborate. These complex, sacred geometric patterns not only are incredibly beautiful and mysterious but they actually embody ancient wisdom that can only be decoded by the collective subconscious.

Needless to say, in amongst the genuine Earth sculptures, there are some which are created superfluously by the hands of humans, misguided in their attempt to mimic the symbology of the language of light. But there is no denying the impact of those that tattoo our planet from the heavens as they leave an imprint on our heart matrix, shining light codes into our DNA and upgrading our connection to Source consciousness.

So what impact do crop circles have on the human psyche? Read on to find out…

The messages concealed in the crop circles take us far beyond rational comprehension of the third- dimension and catapult us into higher realms of existence where even the unimaginable is possible. Unbeknownst to our conscious limitations, they begin to align us to the higher dimensional frequencies which exist in a spiral of consciousness beyond the veil.

The language of light is a Universal communication system expressed by the Galactic Federation of Light. It is untainted by controlling Draconian influences and speaks directly to the higher heart matrix. The circles originate in the collective visions of those that sit on the galactic council and are projected via ultrasonic, binary sound frequencies to manipulate physical matter on the planet.

These ancient light beings are from the Angellic or ‘Angle-ic’ realms and exist in the purest state of Divine love. By only intending information for our purposeful good, these pictograms infuse our hearts and remind of our natural state of joy, compassion and bliss.

Encompassing this wondrous world is a majestic crystalline grid. During the fall into the 3rd dimension, this web of energy has been depleted but fortunately not beyond repair. Over the years, many Ascended Masters, Lightworkers and Starseeds have reincarnated on Gaia with the sole purpose of reawakening its magical potential and re-energizing activation points along the ley lines.

Many crop circles are formed in Wiltshire in England which is the home of one of the planet’s power centers, Stone Henge. Here, energy from the cosmos can be harnessed to receive information as it is the heart chakra of the world. This location is the purest epicenter to watch over the circles like a nurturing mother. 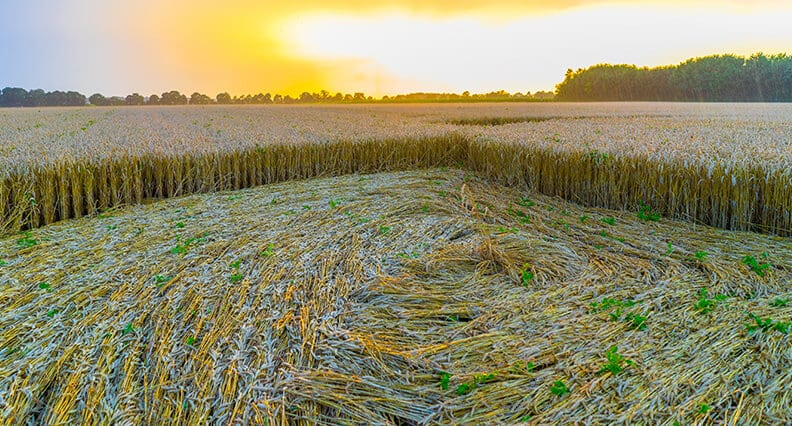 Over the years, the energy frequency found the center of the crop circles has been measured and monitored. It has been discovered that where these intricate patterns form the energy resonance is of a much higher frequency.

Another thing investigators into crop formations test is the presence of radiation. They discovered that levels of radiation in the soil were three times more than normal. Evidence of rapid heating and cooling was also found, as some of the crops from within the circles displayed an increase in seed germination.

RELATED POST: 12 Things You Need To Know In 2020 About The Ashtar Galactic Command

Many crop circles are not just pretty pictures. Some, when studied closely, have been found to contain complex mathematical equations. Back in 2010, a circle that formed in Wiltshire contained ‘Euler’s Identity’ which is one of the most complex and elaborate mathematical equations on this planet. A few years before then, another one showcased the first 10 digits of pi.

RELATED POST: Deprogram Yourself – 5 Practical Ways to Break Free from the Matrix

Strange orbs or white balls of light are intimately linked to the crop circle phenomena. They glow a couple of meters from the ground and move rapidly and intelligently. Many researchers believe that these strange lights are the likely cause of crop formations, without understanding why. They just seem to appear to disappear into thin air as if they are slipping into a parallel universe or a different timeline.

Please leave a few comments to let me know what your beliefs are the purpose of these mind-bending pictograms and if you can decode their insightful messages.