How the Principles of Wicca Can Apply to the Modern World

By The Numerologist TeamJuly 18, 2012Spirituality & Healing 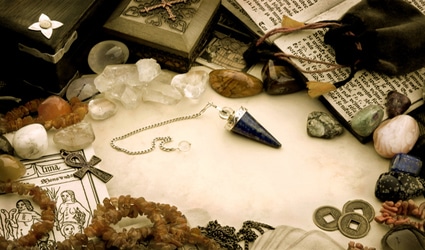 Colored candles. A tiny dish or cauldron. One small bell. A crystal stone that symbolizes the spirit. And four rocks that represent nature’s four elements — earth, water, air, and fire. These are the objects that you would most likely see when you look at a Wiccan altar. No ugly pin-pricked doll or dead animal parts here, although most witches agree that a broomstick at the back of the door might prove to be useful someday. Wicca can be looked at positively in the modern world.

Wicca, a subset of pagan religion, has been around for decades, but continues to be a mysterious topic until today. Its history has been a tale of bloodshed and struggle (although you might say that for most major religions), with the trials and witch hunts as the darkest period ever experienced by its believers. Wiccan religion is said to have emerged in Britain, although it has only been made legal in the UK in 1951. In the US today, pop culture shows acceptance of the concept of witches — mainstream movies such as “The Craft” and “Harry Potter” are the most popular examples — although most practicing Wiccans would still prefer not to broadcast their faith because of fear of being judged or misunderstood.

The myths and assumptions regarding Wicca mostly stem from the fact that believers espouse covert practices such as magic, spells, herbalism, psychic powers, divination, and other similar leanings. It’s safe to say that each Wiccan is a witch, but not every witch is a Wiccan. With the backlash and propaganda from the witch trials, its easy to see why general perception dwells on images of black arts and evil sorcery. However, those living by the principles of Wicca say that there’s no bad deed involved in witchcraft, as long as you stand by the pagan ethic that says: “If it harm none, do what thou wilt.”

Today, most witches believe that the principles of Wicca can even prove to make the modern world a little bit better. Modern witches, as with their ancient sisters, go around the village or city with their candles and crystals to help those that are in pain and soothe the troubled. There are covens consisting of witches from various professions, such as doctors, lawyers, academics, and artists. Most are advocates of vegetarianism and eco-friendly living, in observance of the Wiccan principle that declares, “We seek to live in harmony with Nature.” A lot of the Wiccan women and men consider themselves as feminists, since a world with women being oppressed contradicts another Wiccan principle that says: “We value neither (gender) above the other, knowing each to be supportive to the other.”

As for that broom — while you may find it difficult to make a witch admit that she uses it for flying during the full moon, she’ll probably tell you that it’s certainly useful for keeping things in order.