What Is The Truth Behind The 2012 Prophecy? 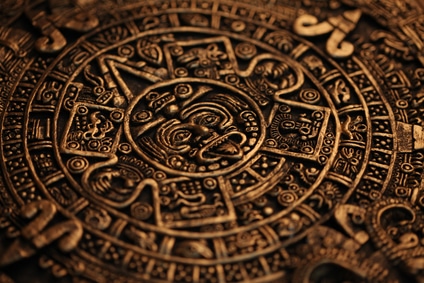 A great change is coming — and it comes with a specific date. According to Mayan scripture, on December 21, 2012, the Sun will be in perfect alignment with the Milky Way and the galactic equinox. This supposed alignment is predicted to bring the end — the apocalypse… Armageddon. The prediction is so intense and so precise that people across the globe are paying attention and, for most Americans, preparing for doom by stocking up on survival guides, building bunkers, and in extreme cases, pondering suicide. What is fueling this profound belief in the impending destruction of the world? The Maya have been right about everything else so far and thus the 2012 prophecy is near….

The ancient race predicted the March 10, 2011 colossal earthquake in Japan. Using their astonishing mathematical powers and their incredible observations of astronomy, the Maya believed time to be cyclical. They believed that as one cycle ends another one begins. The troubling part about that is that each cycle always ends with a furious bang. The Maya foretold that March 9, 2011, dubbed as the “Unity” cycle, will end with an earthquake. The entire world watched in horror as the estimated death toll from Japan’s 8.9 (to 9.0) magnitude earthquake hit 18,000. The tragic day may have fallen a day after the Mayan date but it didn’t change the fact that the catastrophe did happen.

So you’ll read or hear about people finding some truth, some validation for the impending December 21, 2012 earthquake. In fact, the Maya believed the destruction to be so massive that they stopped calculating their calendar beyond 2012. Even though archeological digs have discovered an ancient stone tablet that made a reference to December 21, 2012, archeologists are still skeptical about the fated doomsday. The tablet, found in the ‘60s in Southern Mexico, bears an inscription that tells the descent of a Mayan god of war and creation from the sky on the said date. Early this year, a 1,300-year-old carved brick fragment was found in Mexico and it had a face, which also bore the 2012 date. Scholars aren’t quick to draw any conclusion from such artifacts.

Predictions abound as to how Earth will come to an end in 2012, aside from a massive earthquake. Fearsome solar storms, relentless tsunamis unlike any ever experienced, a solar flare known as “solar max” destroying the world, a rogue planet (known as Nibiru) supposedly hiding behind the Sun hitting Earth… death and destruction on a scale the world has never known. Many people believe — along with the Maya — that the world, as you know it, will cease to exist.

Debates are still raging over the meaning of the 2012 cycle. Some people are heading to the hills for protection. Others prepare for Armageddon. While some strive to actually study the meaning and implication of the Maya prophecy. Then there are others who say the supposed end may actually be a renewal of sorts for the entire world.

There are those who firmly believe that a different perspective on the prophecy can lead to a paradigm shift — a spiritual awakening, if you will, on how people can let their love for life inspire them. From certain sectors in society that recommend a positive spin to enlightening books that can broaden your perspective, there are people who consider the 2012 prophecy other than as a doom and gloom scenario.

Whatever you believe in, panic and despair can’t be good reactions. You can choose to see the 2012 prophecy as an apocalyptic sign or choose to embrace what power it may have to transform your life, and eventually the world. Learn what you can today about the Maya prediction and discern, for yourself, what this ancient civilization really meant to convey to the modern world.