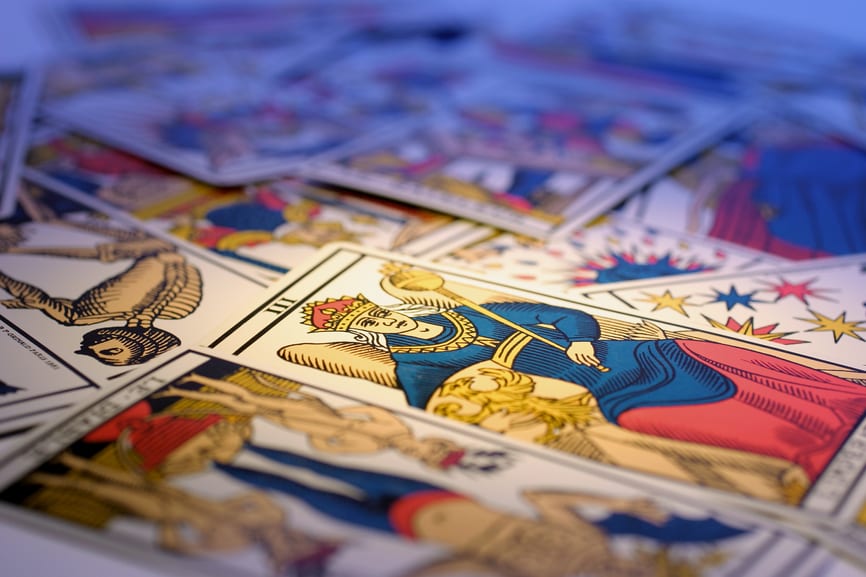 “As divinations systems go, none are more visually enticing and personality-focused than the Tarot.”

I’ve been working with the Tarot for more than 28 years. In fact, this was my very first ‘tool’ for personal & spiritual growth. I love using the tarot for all kinds of things: From gaining deeper self-knowledge to decision-making insights.

And because I find the tarot both a fun and helpful guide into the realm of self-understanding, I want to share some of my nearly 3 decades of knowledge with you in the coming months!

As my quote above says, tarot cards have the benefit of being both visually appealing (great for you artists out there!) and deeply connected with human personality traits. And while all divination systems communicate to us through archetypal truths, the tarot really trumps all others when it comes to this people-focused orientation.

What is An Archetype?

Before we dive into your first tarot insights, let’s just review this all-important term: archetype …

An archetype is a symbol, pattern of behavior or personality type that’s universally understood. You could also think of archetypes as ‘prototypes’ or ‘templates’ of typical personalities and characters. In some sense, archetypes are also stereotypes when they refer to certain kinds of personalities. Here’s a few examples:

No surprise, these examples are also found in the tarot, because the tarot is like a dictionary of humanity’s core, inner archetypes.

In some circles, the tarot has a bad reputation for being a false tool of charlatans and hucksters making false predictions. And while the tarot can be used for predictions, I find that to be the least reliable way to use this ancient system of wisdom. This is because with the tarot, there’s a lot of room for interpretation. In other words: personal bias can easily sneak in.

Yes, what I am saying is that it’s possible to misread a tarot spread to the point of it being useless. And this is why, I believe, tarot has gotten a bad rap.

It’s also why I use this particular divination system in a completely different way. Rather than trying to predict someone’s literal future, my use of the tarot focuses on personal development and deepening wisdom.

Is it possible for me to see that winning lottery ticket or the ‘tall, dark handsome stranger’ about to come into someone’s life when I do a reading? Sometimes, yes. But there’s enough risk in making such a literal interpretation, that I avoid it all together!

Instead of predictive tarot, I use the deck’s 78 cards to help my clients (and myself!) gain insight into the archetypal energies at play concerning whatever issue is in question. For an example of this, just check out any one of my monthly oracle videos on the site, or directly on our youtube channel. You’ll see that, while I tell you the general meaning of the card, my focus is on how you can work with the archetypal energy represented, in order to improve your life.

As my first tarot-related blog post, I figured I should start from the beginning – giving you a basic overview of what’s in a tarot deck. In future posts, we’ll delve into all sorts of fun stuff, like: the meanings of different cards; using different spreads; how to ask a good question; and how to interpret the cards you pull.

But for now, here’s the core things you’ll want to know about the original deck of cards!

A complete tarot deck consists of 78 cards. 22 of these are called the ‘Major Arcana’. The remainder, (called the ‘Minor Arcana’) are split into 4 different suites, with an ace-10 card, and 4 royal cards per suit.

If the minor arcana sound a lot like a regular card deck, it’s because they are! In fact, it’s likely that the tarot’s minor arcana are exactly where our modern playing decks come from. The only difference is that today’s cards have 3 ‘royals’ (King, Queen, Jack), whereas the tarot has King, Queen, Prince & Princess.

The difference between the Major and Minor cards relates to their relative ‘weight’ in terms of your life and your spiritual growth. This means that when a major arcana card shows up in a reading, you’ve got a core, archetypal life lesson going on.

So let’s say, for example, that your question relates to a love relationship and the Devil shows up (number 15 of the 22 Major Arcana cards). Does this mean your love interest is possessed by the devil? Of course not! :D but what it can mean is that you are dealing with ‘bedeviling’ issues in the relationship. Issues around addiction, co-dependence, self-sabotage or some other, undermining energy.

Now the important thing to remember here, is that even if the issue in question is about a relationship, when a Major card shows up, the life lesson is for YOU. The card is giving you information to help you use the circumstances in order to grow and learn.

These minor cards relate more to your day-to-day life and the energies that pass quickly. They are divide into 4 suits. Each suit represents certain elemental qualities as follows:

The suit of Swords represents the element of Air. It’s connected with mental activities and communication. It is often associated with the direction of East.

The suit of Wands represents the element of Fire. It’s connected with creative activities and sexuality. It is often associated with the direction of South.

The suit of Cups represents the element of Water. It’s connected with feelings, emotions, intuition and psychic abilities. It is often associated with the direction of West.

The suit of Pentacles represents the element of Earth. It’s connected with the physical world, including the body, health, material possessions and wealth. It is often associated with the direction of North.

In future blogs we’re going to go into much more detail about working with the tarot, so definitely stay tuned :D In the mean time though, do let me know what your knowledge and experience with tarot cards is, and if you have any specific questions about using tarot as a form of divination and spiritual guidance. This will help me be sure to give you the most valuable info possible.

Feel free to leave your comments and questions below!

Born on April 24th, 1965, Dawn DelVecchio is a 4-4-9 (Life Path, Expression, Soul Urge). This combination lends itself to a life of Spiritual Purpose, achieved through solid skills and a reliable character. Dawn has studied many healing and wisdom systems over the course of nearly 30 years, including Tarot, Astrology, Shamanism, Reiki, Herbalism, Sacred Ceremony, and some Numerology… she's excited and honored to help anyone seeking deeper wisdom, greater insight and a happier, more self-aware life!