March 2017 Energetic Forecast – Into The Realm Of Dreams…

March is when we move through Pisces, the last sign of the zodiac, and then move into the first sign, Aries.  During Pisces season, we have an opportunity to purify and release all the things that have been hindering us.  It is also a wonderful time for tapping into the mystical, into artistry, and the realm of dreams. When the Sun enters Aries on March 20th, we will have a blast of fiery new energy, bringing us to a fresh slate!

Here is a Tarot and Oracle reading to offer us some more insights for this month: 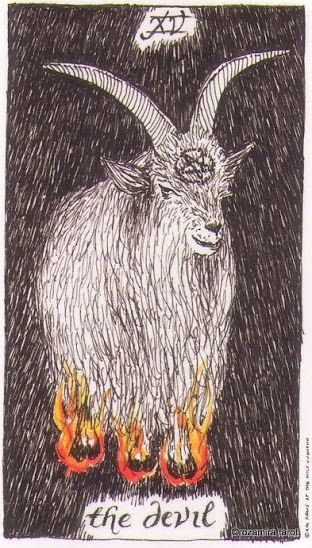 The cards have a lot of masculine energy this month. This energy is focused, directed, and forward moving.  I feel that this is the approach that we are advised to have for March. It is important for us to stay centered on our course.

There is almost a sense of going through a vortex, or tunnel. I feel this is signifying the shift we are experiencing, from old energy to new.

The Devil card is signifying that we are advised to take a bird’s eye view, a higher perspective, so that we may have clearer vision.  It is also advising at the same time to connect with nature, our own animal natures and be in our bodies. What does your body need? What does it have to say?

This reminds me of the poem “Wild Geese” by Mary Oliver:

The 5 of Wands feels like a blast of fire energy. In my mind’s eye, I see a vision of fire clearing the way, creating a tunnel and making a path where maybe there wasn’t one before, so that we may move forward. So even though we are advised to take actions that are focused and forward moving, the energy will very much be in the air, to help facilitate movement in our lives. 5 is a number of change as well, further emphasizing this influence.

From “The Goddess Oracle” deck: 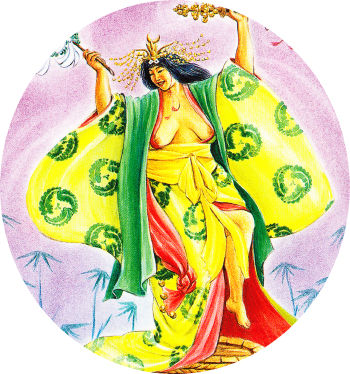 I think it’s so fitting that the Shinto goddess Uzume appears here! Uzume is called a goddess of the dawn and mirth.  There is a story in Shintoism where the distraught Sun goddess Amaterasu goes into a cave to retreat. Naturally, the Earth became cold and there was no life or light. The other gods/goddesses approached the sealed cave and entreated that she come out. They needed her! But Amaterasu, still in her depressed state, stubbornly refused.

Finally, Uzume created a platform for herself and performed a raucous, mock-shamanic strip dance, to the delight of the deities. Amaterasu heard the laughter and cheers, and her curiosity lured her out of the cave.

This story, which parallels the Sun’s retreat each year- and return, shows that laughter heals. Laughter is an essential part of life!

Uzume’s message for us is to be sure to add some laughter to your life this month. The Tarot cards, with their masculine, focused energy seem to be serious – but the goddess Uzume is reminding us to not take it all too seriously.

She parallels the archetype of the maiden in the pagan tradition, with her message of fresh lightness…

Thank you so much for reading. I hope that these insights have helped. Have a great month!