How To Interpret Your Essence Number Transits

As reading the transits of the Essence Numbers is such an intuitive art we are going to take you back to the fictional example of Sue Ann Dunn that we used in the Calculating The Essence Number post.

To refresh your memory, here is her chart again. Note that most charts go to age seventy or longer and that this chart depicts her Essence Numbers from birth to age 20. 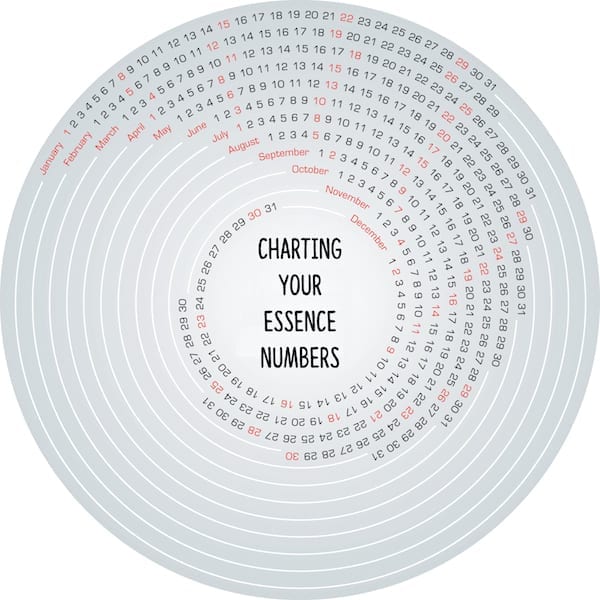 Analyzing this type of chart is all about looking for trends.

The first trend that is noticed is that our fictional Sue got a very happy and healthy start in life as in her year of birth (1960) she is represented by the Essence Number 6 which denotes a strong and devoted family atmosphere.

From age two to four she probably demonstrated more imagination and creativity than most children as that period is denoted by the Essence Number 3.

From age five to seven she may have had a difficult time adjusting to the more restrictive atmosphere of school. Her early school years are represented by the number 4, which indicate feelings of frustration and oppression. She may also have had a hard time making friends or been punished for not being disciplined.

Between the ages of eight and nine the Essence Number is 6. The focus of this number is additions to the family and it is possible that during this period that a sibling entered her life.

At the age of nine, the transit shows a pivot in circumstances that may have changed her entire outlook on life. As the transit is short and involves the master number 11 chances are that whatever the incident was, it shook her faith in others or a higher power. The other reading for this year (1969) is an Essence 2, which indicates frustrations, obstacles and setbacks. It is likely this setback was a parent’s divorce.

The Essence Number 4 that describes her life at age 10 shows that she may have suffered some kind of deprivation in a real physical sense that may have affected her emotional health as well. Like the year before this is a transient influence that marks hardship triggered by a single traumatic event such as the divorce or family split indicated in the previous year.

At age 11, there seems to be an ending or goodbye to a long hard phase in her childhood as 1971 is denoted by the Essence Number 9 which signifies beginnings and end. It seems likely that in this year she was offered a fresh start in life somehow, but not without the pain of saying good bye to something she holds dear.

The Essence number 5 dominates 1972 which indicates a period of relief and freedom of cares for this little girl. However it also indicates someone who may feel a deep terrible loneliness.

From age 13 to 17 she enters a long transit of four years that is dominated by the number 6. The number 6 denotes family unity, security and happiness so it seems that the worst is over and that her adolescence is happy and healthy. However because it lasts more than three years this transit could also mean that an adult in her family (a parent) might require more devotion and attention than most parents and perhaps even financial support. A long Number 6 transit at this age can mean having to drop out of school to support a family member.

At age seventeen we see a pivotal point as for a single year (1977) she is dominated by the Essence Number 5 which is about breaking away from restrictions and achieving personal freedom. It is likely that she breaks away from her family at this time to pursue her own dreams.

Her eighteenth year (1978) is represented by Essence 1, which means that this individual achieves a brand new, happy start in life. This number emphasizes successful ventures, good ideas and “coming into one’s own.

Her next three years (age 19 through to 21) are dominated by the same Number 3 Essence that dominated her toddler years. As this influence is three years it is likely that this individual will achieve fame and recognition through her artistic endeavors and be quite successful at it. The number 3 Essence also indicates great happiness and many blessings in general.

It is one thing to do a short fictional chart. As mentioned before this Essences chart done for the fictional Sue Ann Dunn was invented for teaching purposes only. In the next post we will be giving you an example of a chart based on a real life celebrity – Kurt Cobain (who ended his life at age 27) to take you comprehensively through the process of doing such a chart.

READ ON TO DISCOVER THE MEANING OF YOUR ESSENCE NUMBER

What are your essence numbers? Let us know in the comments below!

Drawing on your unique personality code, discover how to equip with the tools to unlock your potential!

Get Your Personality Decoder Report Here