Predict Your Future with Letters! (Part 2)

Letters of the Alphabet: H to P 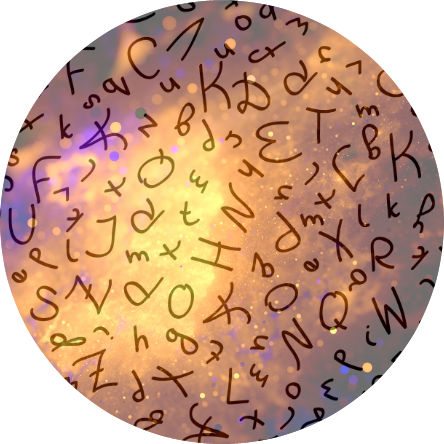 In part 1, we started our journey through the letters of the English alphabet, putting special emphasis on the fact that they mean more than their numerological associations. We introduced you to the idea that they, like numbers, are also ciphers that have meaning hidden within them. Outside of their number values they are symbols in their own right. Just remember that this analysis is based on the modern alphabet-number conversion system, which is only one of many.

So let’s pick up where we left off, starting with the letter H.

– Looks like a rung of a ladder, which one can use to climb up or down. It is both hope and hopelessness, and signifies the healing force that may take us down before we can go up. It’s about “having a lot of heart”, but can become the victim of its own hungers. It does not bring easy choices when transiting; what seems like heaven may turn out to be hell. Cornerstone words: Happy, Hate, Hearty, Hollow, Harm, Heal, Harass, Help and Honor.

– Being the first letter with the value of 9, I is the cornerstone of intuition, and as a word can mean the ego – it’s both the internal guidance system and the self-referencing internal dialog. As “is” it can define existence, but can be illumination or ignorance, intellect or idiocy, insight or illusion. It connections to spirit are almost infinite, with cornerstones like: Imagination, Instinct, Improvise, Ignite, Intelligence, Inspiration and Ignore.

– Can show how something from the past can shape the present and future, and may act like a judge, jury or jailer during its transit. Judgment is its best keyword, but J can be filled with jokes and joyousness – once it learns how to avoid jinxing itself by holding on to things that no longer matter, and jettisons its old junk. Some interesting Cornerstone words are: Join, Jealous, Jump, Justice, Jubilant, Jazzy, Jalopy and Jet.

– Is open to the future; with one hand and one foot forward it represents new methods, ideas and interests. Social and outgoing, adaptable and kind, keen on learning, K finds it easy to let go, but makes a good friend. It may mistake expectations about money for the real thing. In transit, it promises new energy; original, unique and refreshing. Some Cornerstones words are: Kangaroo, Kinetic, King, Knight, Knowledge, Karma, Kundalini and Karate.

– Resembles an upside down 7, which shows an interest in the spiritual or supernatural side of life. It could also be an arm reaching out to help others, in that it is a loving, and sometimes lusty vibration. Idealistic, cheerful, receptive and eloquent, it is sometimes associated with singing. L may bring long-distance travel, knowledge or romance during its transit. Key Cornerstone words are: Love, Life, Leader, Learn, Lend, Lasting, and Laugh.

– Looks like a mountain range, and is as silent and sturdy as one. It shows both ups and downs, and will generally avoid expressing inner thoughts and emotions. Nevertheless, it carries the dependable and reliable qualities of vibration Four, and is intelligent, domestic, practical and loyal. Its transit will bring a period of safety, security and practicality. Key Cornerstone words are: Marriage, Mind, Mask, Mirror, Mystery and Money.

– Is neutral and balanced; when turned upside down it looks the same. It’s always in motion, and although it can go overboard, it rights itself quickly, which is important in this intuitive and sensual vibration. Accepting, adventurous and adaptable, N is able to maintain perspective even in the most unusual circumstances or changes, even during its transit. Important Cornerstone words: Normal, Nurture, Non-Ordinary and Noticeable.

– Confines all, but is defined by the empty space within it. It can be open-minded and opinionated, ordinary or opulent, and has a lot to do with oration and communication in general. It can be articulate, secretive, responsible and willful, and may bring love affairs, marriage, divorce or travel during its transit. Descriptive Cornerstone words are: Ornery, Ocean, Orbit, Omen, Ordinary, Objective, Opposites, Open, Oracle and Orientation.

– Is a bit top-heavy, like F, but rather than reaching out, it curves back on itself – it’s closed – but P is pensive, intelligent and analytical. It pronounces its profound judgments in almost perfect way, but can be blunt and severe when it does. It’s also possessive and may have difficulty communicating, and can be secretive or confined during its transit. Key Cornerstone words are: Portal, Power, Pregnant, Perfectionist, Panic, Perplex and Persevere.

These are brief descriptions of the letters, but these simple explanations can give tremendous insight into the forces in operation in one’s life. They can be quite complex when considering their transits in combination with the Expression, but the alphabet is one of the most valuable studies in Numerology. The listing will continue in Part 3; more information about name analysis in general can be found on our website, Numerologist.com.