Numerology Goes Hollywood! Discover How The Numerology of These Iconic Celebrities May Have Predicted Their Rise To Stardom!

This is the first post in a series focused on celebrities, world events, the arts and culture and other things that we are likely to be aware of on any given day. These posts will concentrate on general Numerology as illustrations of the Numbers as basic Archetypes that become manifest in ways we can see, hear and understand. Read on to discover how the number #1 influenced these iconic celebrities…

Lots of celebrities have a birthday number of 1, such as J. Edgar Hoover, Paul Revere (yes, the one of legend from the early American Revolution), Edgar Allan Poe (born on the 19th), Elijah Wood (you might remember him as Frodo in the Lord of the Rings series),  Nicholas Copernicus (the first European scientist to prove the Earth and Planets traveled around the Sun, or rather the father of modern Astronomy), Lady Gaga, Actor James Franco, Wyatt Earp and many more.

But the one I wanted to start with is the much-loved actor of the 1950s and ’60s…Debbie Reynolds!

The Numerology of Debbie Reynolds 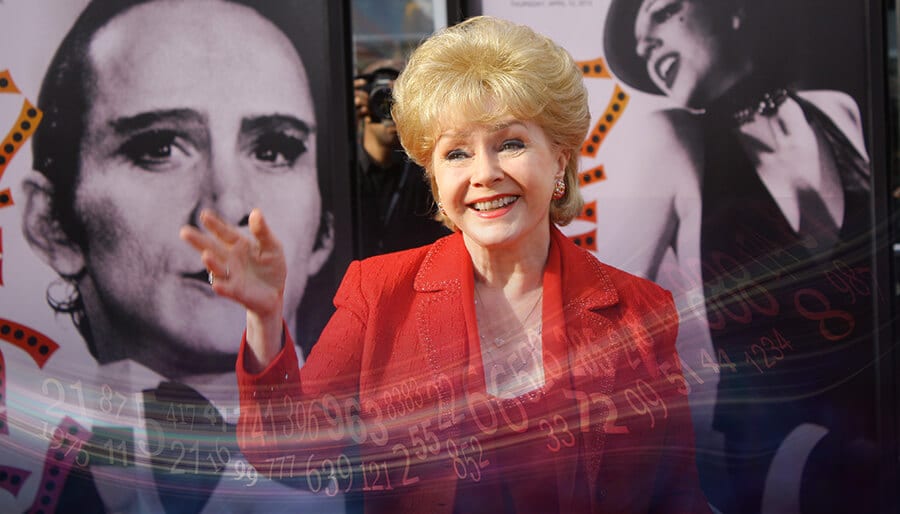 She was born on April 1st, 1932, giving her a 1 birthday Number and a 2 LifePath. I chose her as a first example because of her breakout role in the 1952 (Universal Year 8) Musical Movie “Singing in the Rain.”

Her history was well known – she was born into a very poor family in El Paso Texas at a time when sometimes the food on the table in their shack was jackrabbit, shot by her father, who was a railroad worker. Her mother took in laundry. As you can see from her Month #4, she had a difficult early life with many limitations. But she was not daunted – her 1 Birthday Number and her 5 Achievement Number, both of which are optimistic, energetic and future-oriented, are seen easily by her speaking many times of the lessons of poverty and the hardscrabble life that resulted in her becoming one of the top stars of Film, Stage and Television as an adult.

The family moved to Burbank, California in 1939, with her Formative LifePath Cycle being 4 and her 1st Pinnacle, 5 continuing on for a while yet. She was thought of as an unattractive tomboy in high school, and rarely dated, but won the Miss Burbank beauty contest in 1948 when she was 16. Talent scouts who saw the contest vaulted her into a brilliant career in the thriving film industry.

She had a TV show back in 1970-71, at which time she was the highest-paid woman in television. By then, she was in her Productive Cycle, which began at age 24, bringing out her Birthday Number, 1. Now in the Pinnacle of Foundation, which began at 35 and carried #8, you might guess that she was a person who wouldn’t “bend the knee” for anyone. She quit the show for advertising cigarettes out of her concern for public health. She said “I am not a phony or a pretender. With me, it wasn’t about the money, but integrity.” She did lose a decent sum of money, and the law forbidding Cigarette advertising on television had already been enacted before she left.

Debbie Reynolds was a striking example of how Numerology can be clearly visible in one’s life.

But the main reason I chose her as my example of a Birthday Number 1 was not because of her Biography that read “by the numbers.”  It was because of her performance in the classic film “Singin’ In the Rain.” Not that I’m a big fan of musicals, but this one was an almost perfect representation of the Number 1 and the way we read it in Numerology.

It was a very funny comedy. Hollywood was in the Beginning (1) of putting Sound into films; the earliest (1) days of this “new” (1) technology. It followed several characters struggling to make their first full-length sound film. Not only was it about the struggle to catch up with the New (1) technology, but the clashing egos (1) of the studio’s two top stars (1) added more #1 juice to the plot. The entire theme of the film could have been read as a “get ahead or get out of the way” (1) theme, full of hope and optimism (1)… and it was done with brilliant casting, from the standpoint of Numerology anyway.

The Movie was released in 1952, a Universal Year 8. 8 is, of course, a mixture of determination, persistence, ambition and courage.

Good casting, at least to me, matches the Numerology of the actors to the story.

Let’s look at the numerology of the main cast for a minute:

Jean Hagen: b. 8/3/1923 – LifePath#8, Birthday#3, Achievement#11 – Played Lina Lamont, the talentless, vain and ruthless (8, 11) “other half” of Lockwood and Lamont the star team of the Studio’s silent films. Her communication issues (3) were at the heart of many of the sub-plots of the film.

I won’t give much of the plot away, because this movie is too funny to miss just because it’s 68 years old.

Don’t read a synopsis, you’ll miss all the good jokes and uplifting themes. Maybe at some point in the future, I’ll do an analysis of a few of the sub-plots for your entertainment. But in the meantime, there is probably a copy of this film on YouTube or some other source.  It wasn’t that much of a blockbuster when it came out, but has since won so many awards and has been heralded as one of the top 50 movies of all time.

Did the Numerology of these iconic celebrities surprise you? Let us know in the comments below…