In A Rut? Here Are 3 Steps To Move Through Difficult Times With Grace 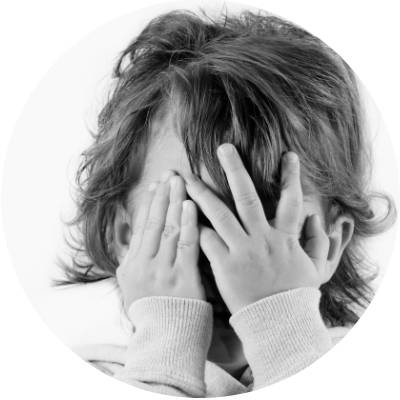 Whether you work for yourself or someone else there are going to be times when difficulties can have you living with daily anxiety, fear or worry.

I remember each time there was an announced reorganization at the company I worked for; and there were a LOT of reorganizations! The level of anxiety that would build in the department prior to the facts being made known was off the charts.

And I wasn’t immune.

Very little actual work happened. Instead energy went into a growing mass of worry, anger, fear, resentment and even rebellion.

And, for some reason, the announcement of the pending reorganization would be made weeks ahead of the actual event. Crazy!! What a way to end up with a totally demotivated set of employees.

I found during these times that I would often have stomach cramps when I was on my way to work – that’s how much the unknown upset me. I was one of those people who liked to be prepared. I needed to know what was expected well in advance so I could meet those expectations.

In short, my relationship with the unknown was fraught with angst.

We were NOT friends.

As I look back I realize that I had a lot more power in the situation than I knew. My power didn’t come from being able to affect the decisions being made but rather from how I reacted to them.

I learned that I didn’t have to think about something and stay in worry every moment of every day. I had the power to decide where I wanted to focus my thoughts, emotions and actions.

That knowledge and practicing the techniques I’m going to share with you enabled me to move through much larger difficulties in my life than the company reorganizations I’ve written about here.

And somewhere along the way I made friends with the great UNKNOWN.

Often life might move you along in ways that may seem unkind at best and harsh at the worst; but those times can contain some of your biggest opportunities.

It’s all about going with the FLOW!

Ok, that may seem simplistic but learning that there is a FLOW to your life (and mine) helps when unwanted change looms.

So here are my three ways to move through difficult times:

Really? Yes, really. Like me you most likely forget to breathe when something distressing happens. So, before you even try to figure out what you are going to do about whatever happened – STOP, close your eyes and take three really deep breaths. You may be surprised at how that simple exercise begins to put you in a different state of mind.

2. Give yourself time to decide what to do.

It is human nature to want to figure out the answer right away but it isn’t necessary. You live in a world with a heightened but un-natural sense of immediacy – have to text back right away; have to answer those emails; have to check off items on an ever-growing ‘to-do’ list. In truth, decisions made in a hurry are usually the wrong ones. So you have my permission to take a holiday from thinking about whatever the problem is. Instead focus your energy on what it is that makes you happy in your life. Give yourself over to that. The other situation will still be there when you are ready to address it so use this time to remember all the joy you have in what you truly love about your life.

3. When you are ready to sit down and consider whatever situation is before you, make a list of the opportunities hidden within.

For example, when my company decided to move out of my city I panicked thinking I had to rush and find another job or change my lifestyle and move to a place I didn’t like. In fact neither of those two options were my path forward. A friend startled me by saying how wonderful it was that now I could think about what else I might want to do. As I took that in I realized she was right. It was an opportunity to reconsider whether I even wanted to stay in my same field or do something else. And I ended up doing something else and becoming much happier along the way. So look for the opportunities that lie hidden in what seems like a difficult situation. They are there I promise.

Trust that the universe wants you to have a fulfilling life.

TRUST! And see where the flow takes you.