The Children Of The Zodiac – The Sagittarius Child: Active, Voracious, Direct 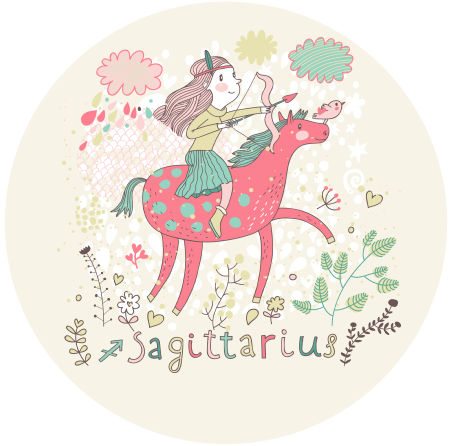 Sagittarius is symbolized by the Archer, which is a Centaur (half man and half horse) aiming his bow and arrow. The Archer’s mythology varies, depending on who you speak to. It seems to me, personally, as if Sagittarians are influenced by all of these mythological figures. According to Babylonian mythology, Sagittarius was identified as Nergal – the God of death, pestilence and plague (often associated with war); later turned into Lord of the Underworld. In Greek mythology, most centaurs were portrayed as hostile, lawless beings who were notorious for their drunken behavior. Among the centaurs was Chiron, who was unlike any other centaur. As a baby, he was abandoned by his parents. However, when Apollo found Chiron, he took Chiron under his wing and taught him all he knew. From Apollo’s teachings, he became a well-known healer, intellectual and mentor to many powerful figures. The combination of Nergal and Chiron explains the Sagittarian approach to life.

Sagittarians have a strong opinion of “right” and “wrong,” with a strong affliction to what they consider to be wrong. They do their best to live the most meaningful life possible. They prefer to take part in activities that help the greater good. Sagittarius child is very philosophical with an active mind. In addition to being in such activities, he also loves to exert energy. He enjoys being active, though he may not care to take part in traditional sports.

Sagittarius child has a strong opinion about what he likes and what he does not like. When he finds subjects that interests him, he will learn very quickly. He has a strong appreciation for other cultures, so you may find that he takes a liking to foreign language classes. He does his best to excel in subjects and activities that he feels are important for his own growth, though this mentality may cause him to brush off other important subjects. Sagittarius child loves to learn, so make sure that the toys, games and books he has will stimulate his mind – learning is more exciting to him when he can do so through different methods.

Between school and extracurricular activities, he balances a lot of work. Sagittarius child has impressive stamina! He can enthusiastically jump from one activity to another, outlasting his friends and classmates. Keep in mind that his enthusiasm towards current activities may not carry onto his original ideas. He may need moral support from his parents when it comes to his own ventures and undertakings. To set Sagittarius child up for financial success, teach him that budgeting is important and that money is not unlimited. He would prefer to learn how to budget on his own, but just remind him to prioritize his spending, and be firm on the allowance amount you give him. Also, remember that he is a clever and cunning child, and he may try to trick you into thinking that you promised him more than you actually did!

Sagittarius child finds confidence when he is seen as an intellectual equal to his parents. One way to help with his confidence is to invite him to discuss issues that arise in the household. In these discussions, he will surprise you with his innovative solutions. He loves giving advice, sharing knowledge and wisdom. Even as a child, Sagittarius will be acknowledged for his wise words, though he can be very blunt! Sagittarius child is blunt because he wants to make sure he is clearly understood. His words are not driven by any bad intentions, especially since he does not believe he would get upset if he were to receive his own words. Sagittarius child is also very goal-oriented. In order to confidently achieve his goals, he has to know that his parents trust his judgment. You may find that he is restless, and he quickly moves from one location to the next. His growth as a person will be supported by experiencing different sceneries. In order to allocate his restless nature towards positive activities, it is up to you to guide him towards such. Give him space to explore, but check in on him regularly. Take him on trips and vacations, even if they are local. He loves animals, so he would be grateful for a trip to the zoo or aquarium. As he gets older his restlessness will show even more.

Sagittarius child is an adventurer, and he dreams of traveling the world. His curiosity goes for miles, and he loves making observations about the world and the people in it. Being of the Fire element, Sagittarius has fiery passion that can sadly be extinguished if not correctly supported. Sagittarius child can get moody if he does not have enough activities to keep his mind occupied. If his childhood is spent confined at home all day, his mental and personal growth may be severely stunted. If his dreams of exploring the world are knocked down, he may lose sight of his own potential. Do your best not to confine him, even if it is out of punishment – he can be disciplined in other ways. If he does disobey you, know that it is not because he is having a power struggle with you. However, he does like to test his luck by seeing if he can get away with bending rules. Keep household and conduct rules written down so that they are understood clearly. Although Sagittarius child thrives in an honest, open and trusting environment, he also needs parents with a firm stance on rules and morals.

New destinations are exciting for Sagittarius child, even if they are local. As long as he can see new sights and explore, he will be happy. He loves being outside, and he will even enjoy getting messy in the process. Many Sagittarius children enjoy playing sports, or at least watching and keeping up with professional athletes. When provided with toys or sports equipment, he can stay occupied for long periods of time. He wants a parent who can have fun and play with him outside. However, he also wants time to play alone or with friends. If you watch his every move, he will find ways to pull away from you. Sagittarius child enjoys exerting physical energy, and he may become exhausted before he finishes his assignments. Just like money, he has to understand that energy needs to be budgeted and allocated. If he spends too much energy in one place, let him know that he may not have the energy he needs or wants in order to accomplish all that he wants to.