The New Moon & Its Power To Heal Karma: A New Moon Ritual

The New Moon & Its Power To Heal Karma: A New Moon Ritual 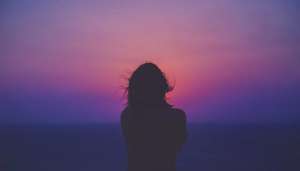 The moon is a mysterious entity indeed, and even the unromantic can’t deny the serenity and the beauty it exudes. But it’s not just its appearance which makes the moon so special. The cycle of the moon reflects the energies felt by all of us here on Earth. This New Moon Ritual can help you embrace the Moon’s karmic energy.

What makes us vulnerable to the cycle of the moon?

The first aspect is that the Moon’s effects on water. You probably know that the cycle of the Moon has a huge influence on the tidal patterns of the world’s oceans. But did you know that our water-filled bodies can be affected in much the same way? The ebbing and flowing of our energy, thoughts and feelings can move in line with the lunar cycle.

The second aspect is the fact that the cycle of the Moon is synonymous to our life, our karmic living. As the Moon wanes and depression sets in, at the lowest point with no light in it, it gathers all its strength to manifest the fullness again.

It discards the karmic residues when in its “no-shining” state, and as it reaches into the void of the unknown, it revels in the mysteries that have been revealed to it; now it knows how to create the fullness, how to reach the light that burns bright from within.

The Moon tells us quite frankly, and with its own example again and again, that everything is changeable and everything is attainable, even if we’re in our most depressed, most difficult state!

The Power of New Moon Energy

Each moon phase has a definite and specific power, but for now, let’s discuss the effect of New Moon energy and how can we utilize this energy to work on our karma fast… so we can start manifesting fast.

The New Moon is the darkest phase of the Moon, where we can’t see any light. It represents both the difficult state of our mind, thoughts and emotions, as well as the womb. So, healing and creation, karma offloading and manifestation are bound together.

It seems a little complicated but when we tune in to the energy of the New Moon, we find that it’s an opportunity of a lifetime because of its potency and power. We are given an opportunity here to release the difficulties, blocks, obstacles and issues from our life, from us, and also to manifest what we desire.

There has been much written about how to manifest during New Moon, but always forgotten is the fact that our karmic energy – which creates obstacles in every way possible, holding us from the right action, right time or right ideas – has to be released & healed first. Which is why even after many manifesting rituals on the eve of New Moon, many of us are still struggling to manifest!

Let’s then walk the first path of karmic release, so the second one of successfully attracting our desires opens to us automatically. Let’s heal our negative karma on the day of New Moon.

When you do this ritual, you need to believe in yourself and the energy of New Moon; only then will this technique flower and show its magical powers.

To the powerful energy of transformation of my New Moon Goddess,

I call & request your mighty healing power to heal & eradicate all karmic beliefs,

thoughts & emotions within me. Let me see things, people and situations clearly without judgment.

Do this New Moon Ritual every New Moon along with any manifestation ritual you have and you’ll see the results are faster and things will be easier for you. This ritual also helps in lessening pain and fatigue from our body

Do let me know how you feel about this New Moon Ritual and this beautiful facet of the New Moon in the comments below.

10 SIMPLE MORNING RITUALS THAT WILL TRANSFORM YOUR LIFE!