The Perfect Moon Tattoo For You Based On Your Zodiac Sign

By The Numerologist Team
According To Your Zodiac Sign, Astrology

The Perfect Moon Tattoo For You Based On Your Zodiac Sign

Everyone has looked up on a dark night at the moon with awe and wonder. The ever-changing moon is a gorgeous symbol of newness, change, and versatility. For those who wonder at the nature of life and what comes after, a moon tattoo is a natural choice.

In different cultures and throughout history, the moon has become a symbol for a large number of things and ideas. What type of moon tattoo is right for you? The answer lies in your astrological sign. Let’s take a look at each sign to see what moon tattoo is the best fit for you.

An Aries is always determined and confident. Though this can be paired with short-sightedness, aggression, and impatience, there is no doubt that those with an Aries sign are quick to take action. This is why they’re represented by the full moon.

The full moon, according to mythology, is intentional and wise. It’s reached full maturity, and it’s not afraid to be seen and heard. 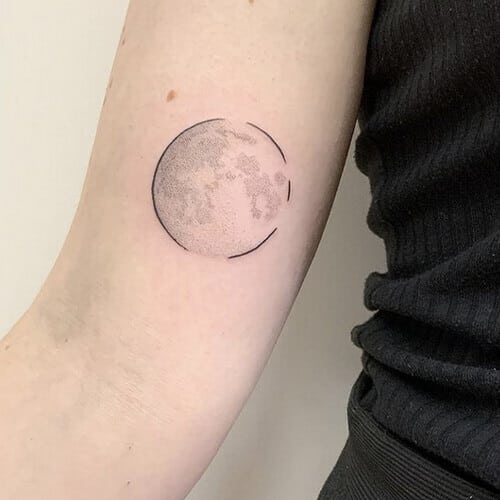 A simple moon tattoo is one that doesn’t have a lot of detail. Typically just an outline, this tattoo is minimal in its design, though it packs a big punch when it comes to the meaning. Like a Taurus, this type of moon is practical and grounded in nature. It’s reliable, predictable, and uncompromising. 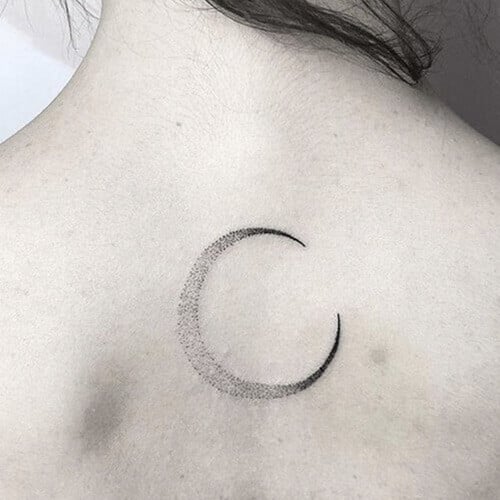 The phases of the moon are always changing and evolving. Like Gemini, the moon does not remain the same. Gemini, at their best, can be curious, adaptable, and gentle. At their worst, they’re indecisive and inconsistent. They thrive when they’re surrounded by change.

The moon phases represent Gemini’s natural cycle, but this isn’t something to shy away from. Each phase is a stunning chance to start again. 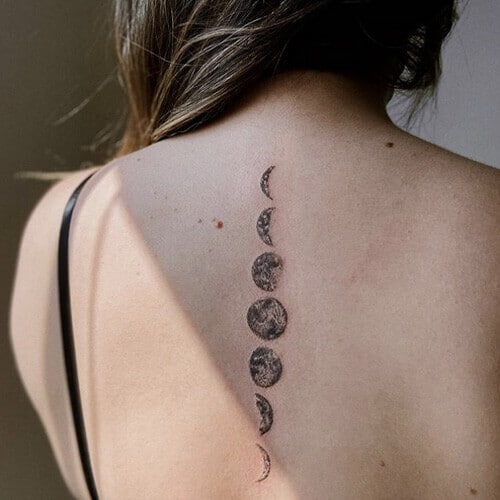 A half-moon is when the moon is partially lit by the sun, though it’s more than a crescent. This type of tattoo is ideal for a Cancer who is emotional, sympathetic, and highly imaginative. Though they might also be moody at times, they’re deeply intuitive just like the everchanging half-moon. 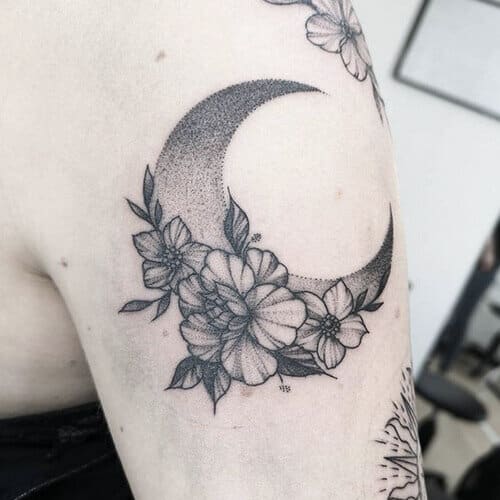 Like a feminine face of the moon, Leos are passionate and creative. They can be self-centered at times, but they’re also generous and warm. Just as the feminine moon smiles over the world, Leos are equally compassionate. 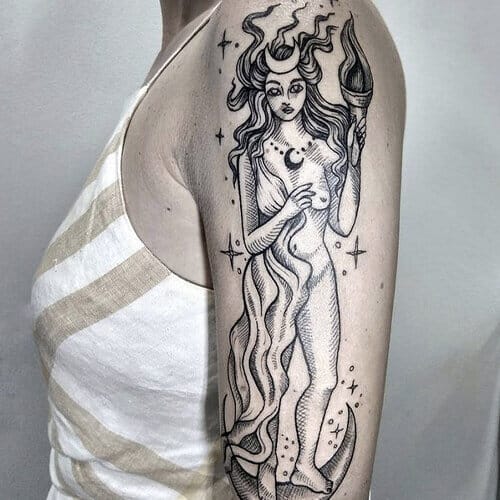 A realistic depiction of the moon in a tattoo is perfect for rational, wise Virgos. Virgos are earth signs, and they’re naturally skilled at making sense of this world and what lies beyond. A realistic, natural tattoo of the moon speaks to their curiosity and need for logic. 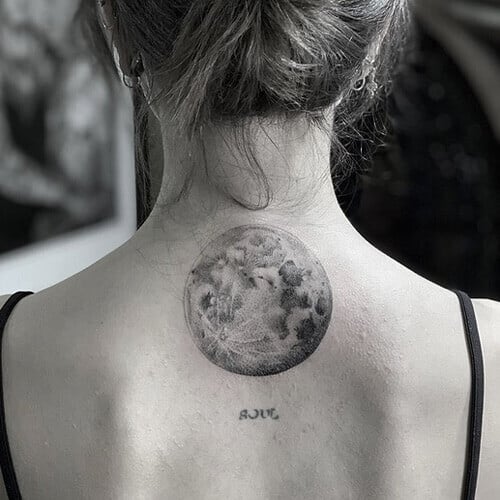 Libra’s are gracious, fair, and indecisive. They like the world to work in perfect harmony, but they also understand that these things aren’t always possible. Known often as the mirror sign, they’re skilled at understanding those around them and also themselves.

A triple moon tattoo fits with the Libra’s need to make peace with all. Representing birth, life, and death, this is the perfect cycle for a consistent path forward. 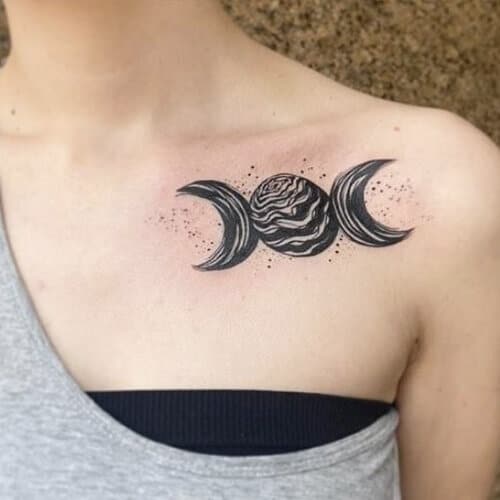 A blood moon was once seen as a sign of the apocalypse, so this dramatic tattoo is perfect for a sign ruled by passion and stubbornness. Scorpios can be ruthless in their personalities, just as the blood moon isn’t afraid to turn to the sky to fire with a total lunar eclipse. 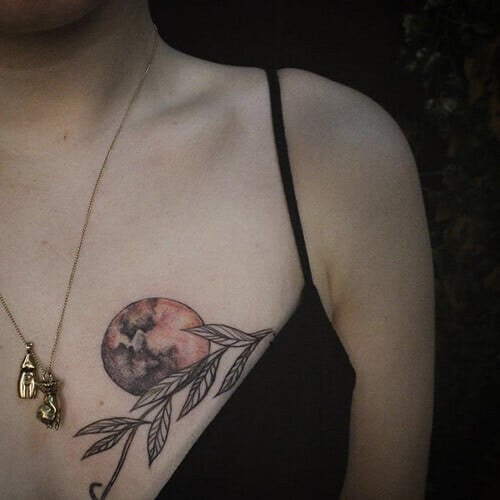 A new moon can barely be seen, if at all. A new moon tattoo would only be the sliver of a moon shape, but it’s still a powerful symbol. Sagittarius individuals are generous and idealistic, known for their sense of humor. Still, they can be impatient for change, just as the new moon is ready for a new beginning. 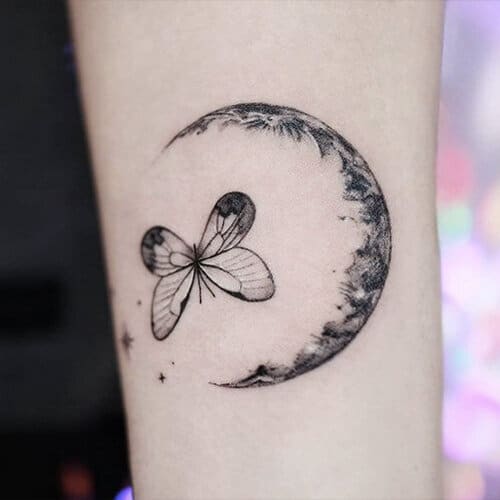 Last but not least, Capricorns are responsible and known for their self-control. Though they can expect the worst in others, they’re grounded in their likes and interests. Like the crescent moon, there is a balance and beauty to their character, always staying true to themselves. 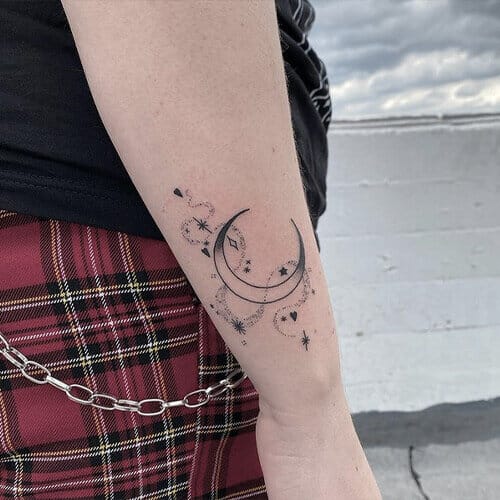 An Aquarius is full of contradictions. At times, they’re shy and quiet. At other times, they’re eccentric and talkative. They’re thought to be highly-complex thinkers and problem solvers, but they also require a lot of alone time to be their best selves.

The sun and moon tattoo represents this duality. For every bright light, there’s a need for darkness as well. This is the ultimate symbol of balance. 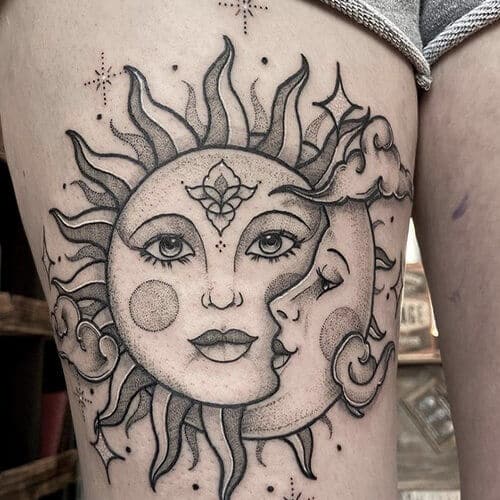 Sun and moon by @vievetattoos

A Pisces is compassionate, artistic, and gentle. They also have a desire to escape reality sometimes. Their natural empathy and high-level emotional capacity are best represented by a moon amongst the stars. Because they shine so brightly, they’ll never be alone, even if they sometimes get lost in their own thoughts. 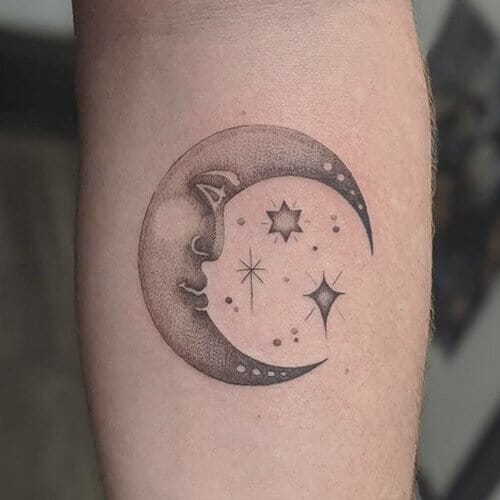 Moon and stars by @lavender.tattoos

Which Moon Tattoo Is Right for You?

It’s becoming more popular to choose a tattoo based on your zodiac sign. Though the sun, moon, and stars are always changing, they’re also gorgeous symbols for humanity and our own lives.

Which of these moon tattoos above fits your sign? The moon means a lot of different things to different people, so it’s time to find the meaning that makes the most sense to you.