What are Moon Phases?

What ARE Moon Phases, and Just HOW MANY  are There?

The Moon phases are the different stages that the Moon goes through as she moves around the Earth each lunar month.

According to different cultures, you may hear of three, four, or even eight Moon phases in a single lunar cycle.

The Moon has been our constant companion since time on Earth began, so is it any wonder that the way we describe her changes a little across the world? Yet, here in the West, there are most commonly understood to be four distinct phases, also known as lunar phases. Plus, in addition to these four phases of the Moon, are four more intermediary phases – making eight in total. 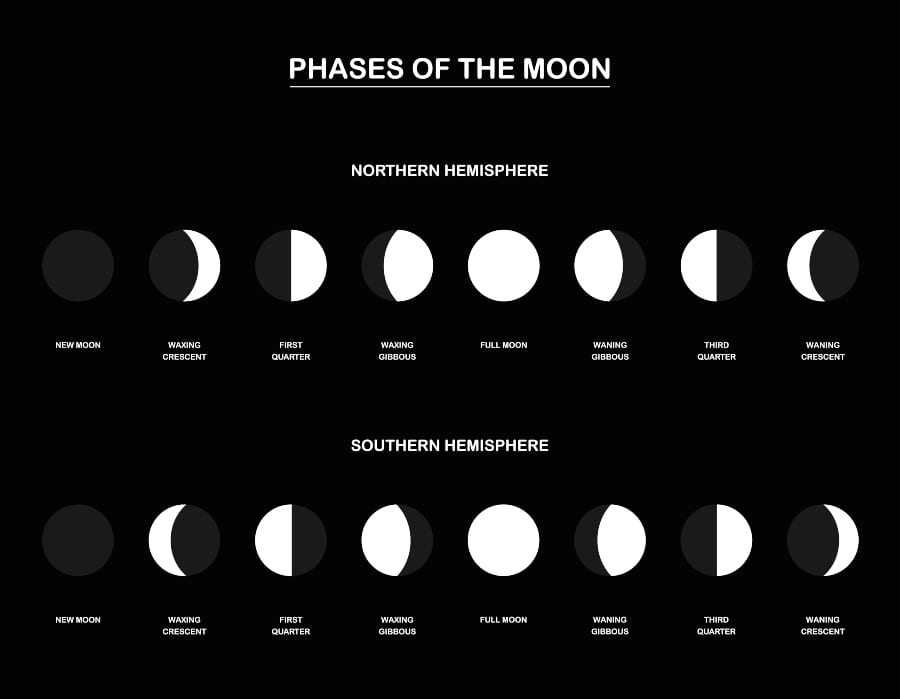 Shhhh… Don’t Tell Anyone but the Moon is Actually Always FULL!

It’s this changing viewpoint that creates the phases of the Moon.

Here’s a quick rundown of each phase, how much of the Moon is illuminated in each, and the kind of energy it carries:

The Moon is invisible.

Because she rises with the Sun, the Moon is ‘bleached out’ by sunlight during the day, and dips below the horizon at night. This means that often if the sky is cloudless at the New Moon phase, the stars show up really brightly.

As the start of the lunar cycle, this phase is dark and fertile. It’s also a sensitive time, people can feel like they want to be alone, energy is low and socializing tends to take a dip.

The energy the crescent Moon emits at this phase is emergent. Generally, energy begins to rise a little and the outlook s more positive and creative.

The Moon is illuminated 50%

In astrology, this aspect is called a square, when Sun and Moon sit at right angles to each other. Its energy can feel like friction, like a block that needs to be pushed through to find progress.

The waning gibbous Moon phase is lively, connected and has a pregnant fullness that has almost reached completion… but not quite. Often it requires stamina and persistence to meet goals, or course correction at this time.

This is the peak of the Moon cycle. 180º apart, the Moon opposes the Sun, catching his light fully across her visible face.
The energy of the Full Moon phase is celebratory and climactic.

This phase of the cycle has a softness. It’s time to harvest whatever has grown and ripened so far. Often people find that a keen eye for detail seems to occur at this lunar phase.

The Moon is illuminated 50%

The opposite half of the Moon is visible, to the first quarter Moon (these are different in the northern and southern hemispheres).
Again, some friction may be felt or a critical choice may appear. Often as the light retreats, this will require inner work.

A crescent Moon appears once more, again, the opposite side is lit to the waxing crescent. This is a time of growing darkness, emotional sensitivity, and rising intuition.

Space and retreat are recommended.