Children of the Zodiac: The Aquarius Child – Stubborn, Smart & Unconventional 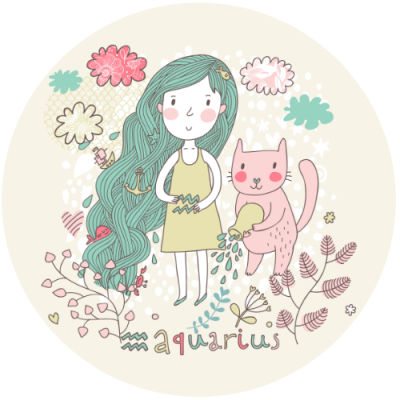 Aquarius child is very curious and attracted to many interests. You might really have to keep an eye on him when he learns to walk! It might be hard for you or others to keep up with this, but his intensely active mind should be celebrated. Introduce him to as many varied interests as you can, such as music, sports, dance and art. You may even want to get him a pet to give him something else to stimulate his curiosities at home. However, be sure to explain that he will most likely outlive his pet.

Being a fixed sign, Aquarius child has a very hard time letting go of anything that is a part of his everyday life. As long as he stays mentally active, he won’t be particular about the activities he engages in. He is broad-minded because he knows that he will learn from just about any situation.

You will notice that his interpersonal connections are different than many others. He may have a plethora of friends and playmates. However, he will find a way to emotionally distance himself from them, as he needs personal independence. He tends to march to the beat of his own drum in social situations! Although Aquarius child is more than capable of feeling emotion, he will do his best to separate himself from emotionally-charged situations. He feels as if a lot of emotions are unnecessary and would rather just move forward with the practicalities of life.

Although Aquarius child loves being around people, he can feel like a misfit, which may cause him to withdraw. If this is the case, teach him and show by example that if he is open to people and experiences, he will have more channels to learn through.

If there is any sign that would come up with his own set of ideals, it would be Aquarius. If you find that Aquarius child’s ideals clash with established rules, talk to him about it while keeping in mind that he understands and respects logic. Bring up his favorite activity or game, and the fact that this activity works best when rules are followed. Given that Aquarius child abides by the rules, he will want his fair share of freedom in other ways. Have him experience freedom by giving him a big outdoor space to play in. Or better yet, give him the idea to invent his own game with his own set of rules. Aquarius child has an inventive streak, so he will really enjoy this!

Aquarius child has an innate intelligence and he uses it to make life interesting and filled with variety. You may find that his social life reflects his preference for variety. He tends to have friends from different circles, walks of life, and with many distinct personalities. When Aquarius child takes an interest in something, he wants to fully understand its foundations and how it operates. His brain is always active, juggling several ideas. Many of his thoughts are geared towards improving the world – or at least improving the world around him. Being symbolized by the Water Bearer, Aquarius child utilizes his creative brain and the tools he is given in order to make the world better.

Aquarius child is open-minded, and he is ready to be exposed to new experiences and new ways of thinking. However, if there is a topic or activity he already has a set opinion on, it is very hard to change his mind! Some people might say it isn’t even worth trying to change an Aquarian’s mind, as that will happen only when they learn the hard way! Being ruled by both Saturn and Uranus, your Aquarius child will show a unique combination of structure, quirks and creativity from an early age. You will see quite a stubborn streak in him! This is often attributed to the fact that he has rapid thought processes, and in an impressively short amount of time, can clearly see various ways that scenarios will play out.

Aquarius is ruled by two very different planets – Saturn and Uranus. Depending on which planet is more prominent in the birth chart, Aquarius children can be very different in terms of conventionality. Saturn, Aquarius’ original ruler, represents structure, rules and responsibility. When Saturn is prominent in an Aquarius’ chart, this person thrives off routine, discipline and conventionality. I (Taurus, for reference) am flexible in the way I abide by rules, and I will follow rules if they make sense to me. I have experienced Aquariuses with prominent Saturn and/or Uranus in the birth chart – both of these Aquarians make me scratch my own head! Some Aquarians with heavy Saturn influence will follow rules without question because he knows that rules exists for a reason. Working and interacting with these types of Aquarians often makes me realize how many rules I bend on a regular basis.

On the other hand, Uranus represents unconventionality, rebellion and independence. When Uranus is prominent in an Aquarius’ chart, this person thrives off freedom and a disregard for the limitations they feel are unnecessary. These individuals will often break rules that are, in my eyes, obviously there for a reason. For example, I know an Aquarius with prominent Uranus in his birth chart who often runs red lights when he doesn’t see another car coming! Being an air sign who carries water, Aquarius child is a quick mover. If he has a strong Uranus in his birth chart, he is also fueled by fire, which will give him more conviction, originality and an individualistic bend. In the case that Aquarius child is equally influenced by both Saturn and Uranus, he have different rules that he breaks, bends and abides by. Go here to take a look at your own birth chart to see which planets are prominent in your chart!