By The Numerologist TeamOctober 20, 2019 Astrology

Just a couple of short days after the Sun shifted signs, entering the deep and murky realms of Scorpio, Grandmother Moon meets him there. New at just 4º of watery, shadow-walker Scorpio, the New Moon will rise at the following times across the globe… 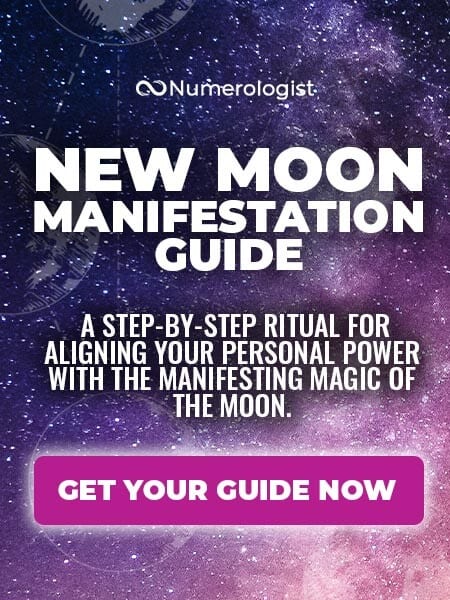 With an energy of such intensity (which you’ll know all too well if you’ve spent time around any Scorpios), it often doesn’t get credit for this quality. But in order to transform (this Zodiac sign’s specialty), then something must be left behind.

That’s exactly what this New Moon is asking of you.

It comes at a pivotal time in the year, just days before Samhain on the 31st, when the veil between the Earth and Spirit worlds is at its thinnest.

SAMHAIN WHO?? YOU NEED TO CHECK OUT THIS POST!

It’s a liminal month in so many ways and it’s within these in-between spaces that transformation occurs. The New Moon serves as the blank canvas on which to draw your dreams…

So what will you leave behind?

And what will you become?

Yet New Moons rarely come without a host of other planetary alignments contributing their particular flavors. Not to mention a trail of cosmic debris to work through too…

There has been a lot of work to do this year. Has the time finally come to rise above it all, and step into a new paradigm?

At the time of the Scorpio New Moon, the skies are giving us all three big opportunities to step up:

1. Finally, Break Away From Your Patterns

Sun and Moon in Scorpio Opposite Uranus in Taurus

Sitting at 4º of earth-sign Taurus, Uranus, the planet of revolution is directly opposing our Sun/Moon union in Scorpio. This is unstable, shaky, and potentially destructive, especially with Uranus currently retrograde. But whenever this planet is at play, the thing to hold firmly in mind is that it only ever shakes loose what isn’t strong enough to resist.

Uranus breaks down what is already crumbling.

Here in Earth sign Taurus since March, it’s visible how Uranus, Aquarius’ planetary power-player no less, been at work on our collective systems all year. (Missed the shift? Read this popular recent post!)

But here, opposite the Scorpio Moon in her fragile dark phase, it’s getting personal.

The thick (and ongoing) onslaught of planetary retrogrades spinning through the sky this summer has been stripping back the layers for everyone.

Now is the time to let them go completely.

For some people this Scorpio Sun/Moon Uranus opposition may feel easy – in fact, you’re probably doing the work already, and the lightness is palpable. But for others, this astrology could trigger another onslaught of friction, discontent, and wrangling between how life is, and how you want life to be.

See this for what it is.

It will stop only when you stop resisting. In a fortnight the Full Moon will rise in the sign of Taurus, as her orbit matches his. So you have two weeks to integrate these opposing energies, as the Moon and Uranus draw closer. And the flip side of Uranus is that it forces us into positions of surrender. So use this pivotal dark Moon phase to surrender. It’s how you’ll finally reach that new beginning.

Joining the Sun and Moon in the sign of the Scorpion, come Venus at 22º, the asteroid Pallas Athena at 25º and Mercury at 26º. As the daughter of Jupiter, Pallas Athena is a Goddess known for her wisdom, courage, strategy, and skill.

This heavy Scorpionic influence across the Zodiac leaves us zero chance of staying on the surface. Smalltalk? This astrology will have you confessing to your childhood secrets while you’re chatting to the postman, laying your soul bare to the world.

There’s also the potential for obsession

So be very, very mindful of how you channel Scorpio’s devotional energy at this New Moon. Dive deep where there IS something to find. Dive deep into your healing, and use the strength of emotion that this lunar presence is offering you. Because this is where Scorpio expresses best.

3 Your Personal Power Gets a Makeover!

Mars at 15º of Libra square Saturn at 15º of Capricorn

Let’s break this down. Scorpio’s co-ruler (along with Pluto) and therefore one of the planetary rulers of this New Moon is currently in Libra.  Mars likes to fight, make, and do. Yet here in the sign of the scales, it’s waiting to hear what every other opinion thinks before it’s safe to make a move.

Here, the brakes are on. And Mars’ favorite pedal is the gas.

An exact square to Saturn is set to exaggerate this frustration. Saturn exerts a different, but equally powerful kind of power to that of Mars –  order, discipline and playing by the rules.

This astrological square could well ignite another round of discontent, but remember the depths at which Scorpio is working through you this New Moon. Dig deeper into yourself. Don’t erupt at the first sign of conflict. This aspect is an invitation to rework your sense of personal power – not to lose it.

Help! Does this Lunar Astrology Forecast Have a Positive Side?!

Yes, it does, and it is! But it’s this New Moon is a lot like the endgame in a long season of tough astrological aspects. And the journey of emotions and growth we’ve all been on has been all about developing inner strength. You got this!

Use this Scorpio New Moon to sow seeds of intent.

Your transformation needs your participation so don’t leave it to chance. On the same day that Samhain hits, Mercury retrogrades back through Scorpio for the final time this year, creating the opportunity to bed those seeds down even deeper.

Scorpio is the master of reinvention. Are you ready for yours?

Click below to get your complete New Moon Manifestation Guide Now!

Wishing you truth and transformation for this Scorpio New Moon.